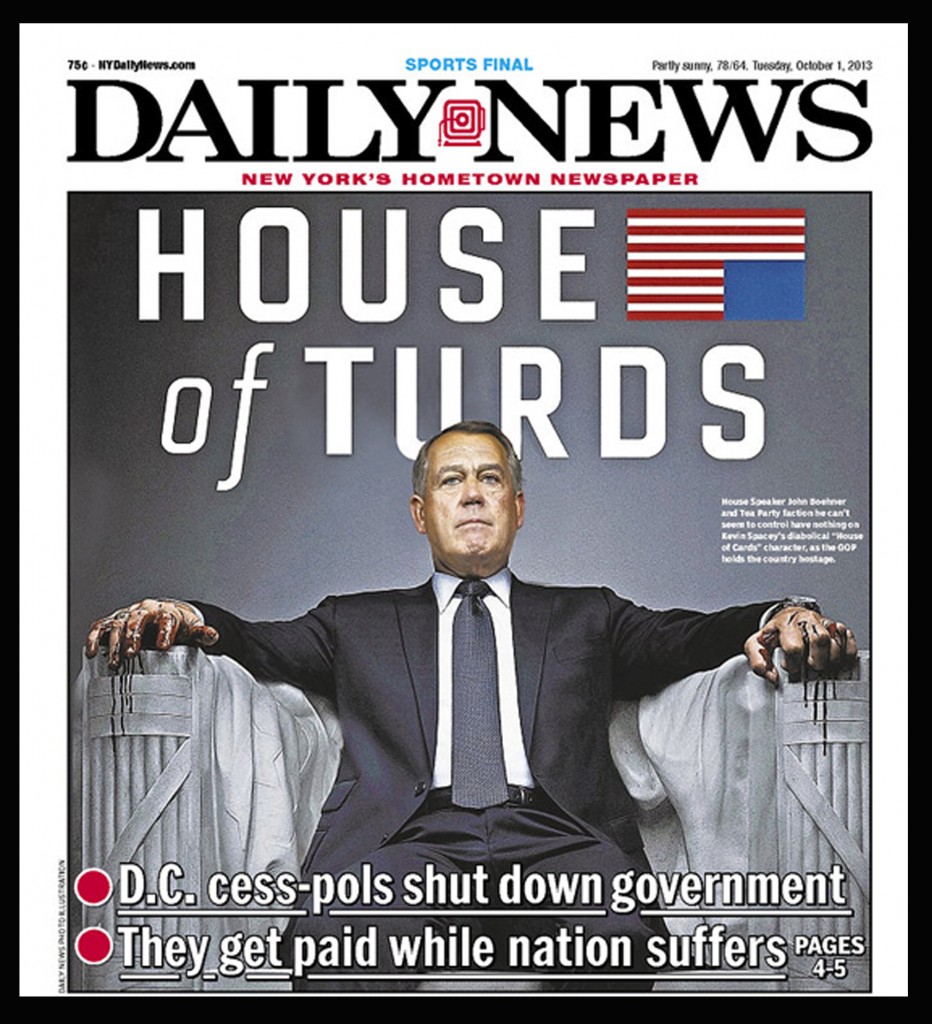 Unashamed and unaffected you are

You get paid no matter what

How much work is lost from the Shutdown of Government?

It’s O.K. for you Mr. Boehner and your Tea Party gang

If there are no jobs or the economy is bad

And shout out loud

“He is not a capable President”

Is that what all you prejudice people want?

Bring him down no matter what

Even if the country will collapse or default

He is not black

His skin is naturally brown

How come you are so tanned?

You are a white man aren’t you?

You are fooling yourself and others

By making your skin tanned

You have African blood too

It is your body and your prerogative

But by shutting down Government

You destroy the country!

That is your legacy

No one will forget

It is not too late

Get people back to work

Then they can do the Government’s work

That is what you want isn’t it?

You come to work for the country

Having fairness for the people

Who you are supposed to work for

Not just for one minority group of people

Do the right thing

You are stupid to Shutdown the Government

and Tea Party faction he can’t

seem to control have nothing on

“House of Cards” character as

the GOP holds the country hostage.

Whistling in my ear

We have more power than anyone

We can command the Shutdown of Government

Tea Party Republican and John Boehner with his tan skin

“We want fairness for American citizens.

American people told us so”

And all the other Republicans

You are all government workers too!

But you all get paid

Self’s protection, no matter what you want to do

Clever law makers are you?

You all get paid

Cut down the Food Stamp Fund

The Poor eat too much

The Republican said out loud

With kindness and God on their side

Not fair, not fair

And the rest of the Republicans

We have to shutdown government

To protect the wealthy pharmaceutical companies

All the Republicans show their Power

Who are the government workers?

Who care if the government workers

Waiting for the pay checks

For food, for rent, mortgages

Or medicine for sick children

And I do not care

We are all government workers too!

But we all get paid

Self’s protection, no matter what we want to do

We want to cut down the deficit

Sixteen days shutting down the government

Let alone the reputation and credit of the country

Cannot go to the APEC CEO Summit in Indonesia

Would be affected not only by the financial loss

But by the loss of jobs for American workers

All law makers should be concerned

Their job is to help the citizens

What is the consequence?

I do no know

And the rest of the Republicans agree

Show them we have power!

I do not understand much about the laws and the country’s policy but as an uninformed  person I think it is dangerous to have one man, Mr. John Boehner have authority to prevent the democratic votes in the house of representative and be able to cause the shutdown the government.  How can the country do all the business that the government is supposed to do for the citizens?  How about if Mr. John Boehner wants to hold on to his authority to shutdown government for longer than sixteen days, maybe a year or two or longer then does everybody has to comply?  I think the country will be doomed if this happens.  Who are the people who made this law? They probably are the same group that allows special privileges for law makers to get paid even though others will suffer while waiting the a merciful decision by the Republican leader in the house.

I do not think this type of law is of benefit to any one even if the Democrats have the majority in the house and use the same tactics the Republicans.  Republicans will not like it if the leader of Democratic Party in control of the House behaves as Mr. John Boehner does.  Mr. Boehner wants to keep his job more than keep his reputation and helping the citizens including government workers.  Who is going to get into trouble?  I think not the wealthy law makers but all the citizens that law makers swear to help.  Law makers are supposed to help all citizens to have a better and more peaceful life.

Something needs to be changed in order not to cause suffering to citizens who are affected by the shutdown of the government directly or indirectly.  This shut down produces turmoil for the entire country and the world.  If the country is going to progress democratically, becoming a more civilized society, then law makers have to have integrity, honesty and be willing to serve all citizens.

The members of Congress are elected to help all citizens but not elected to cause problems.  In the past corrupt members of Congress have been sent to jail or punished in some other way.  But in some cases politicians were able to use their position to cause a lot of trouble for citizens.  For example, Senator Joseph McCarthy used the Senate Committee on Un-American Activities during the period from 1950 to 1954 to destroy innocent people who lost their jobs and some killed themselves.  He called them Communists and traitors with lies and false claims in a process now known as McCarthyism.

Someone mention to me that Ted Cruz looks a lot like Joseph McCarthy. I hope Mr. Cruz will be aware enough of the comparison not to cause citizens and country to suffer the kind of trouble caused by Mr. McCarthy.  Politicians sometimes have hidden agendas to promote themselves first before attending to their duty to represent the people who elected them.  This lack of love of country and its citizens will do a lot of harm not only in the present but in the future affecting the next generation and those beyond.

Selfish people who elect selfish politicians to represent them have only themselves to blame when things go wrong.  Let us learn from the government shutdown and become more civilized.  We can show the world that Americans at the present time are able to cultivate themselves to be better, influencing the world to be closer, more peaceful and harmonious.

After I wrote the above passages I went to Google learning more about McCarthyism.  I found an article “Ted Cruz-The Reincarnation Of Joe McCarthy” written by Rick Ungar, Forbes website, if you have time please read this article.  The link is as follows: https://www.forbes.com/sites/rickungar/2013/02/18/ted-cruz-the-reincarnation-of-joe-mccarthy/3/

Link to Wikipedia on Joshep McCarthy is as follows:

Link for APEC CEO Summit 2013 Indonesia is as the follows: https://www.apec2013ceosummit.com/program.html