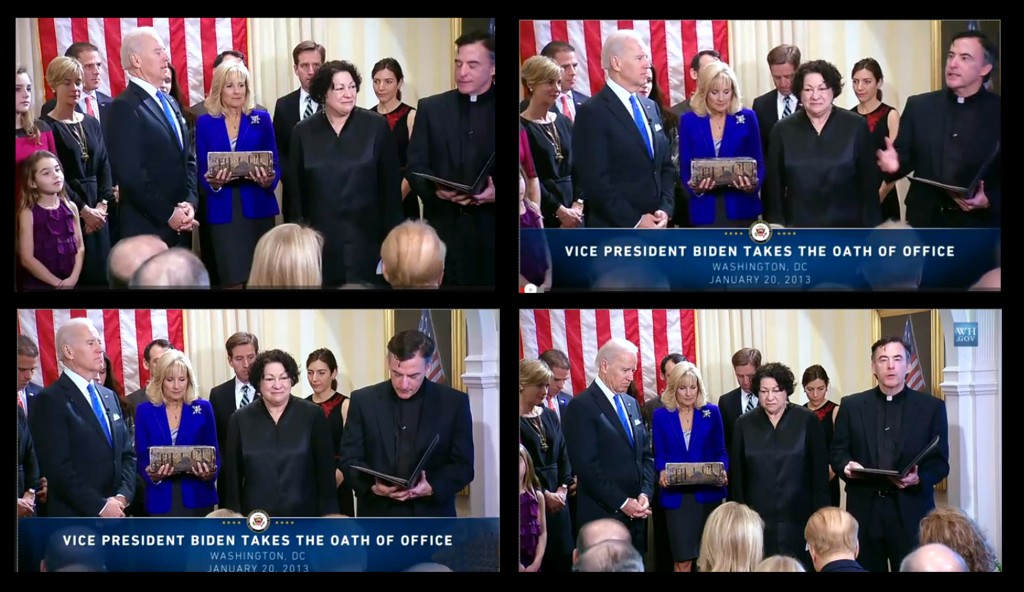 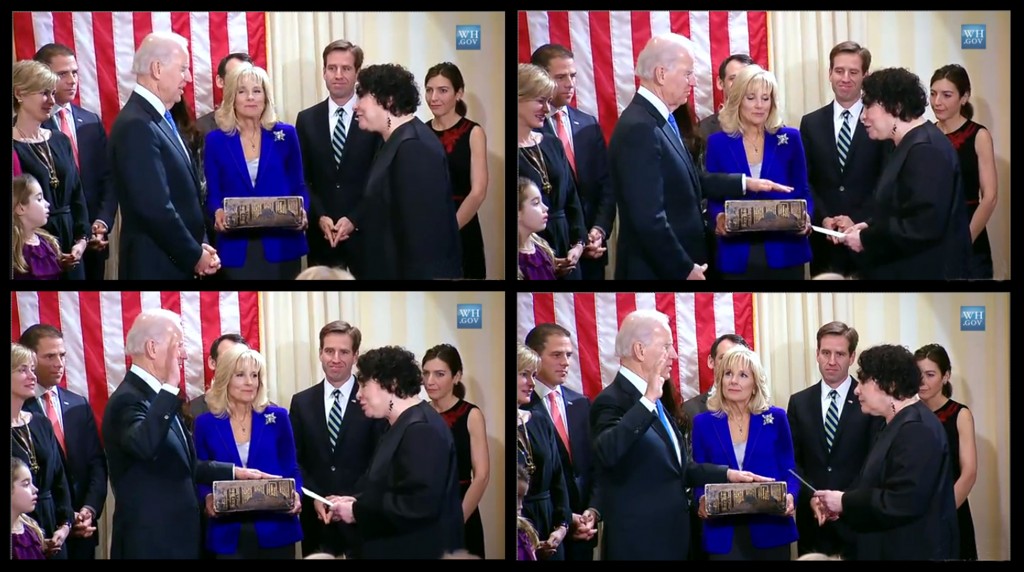 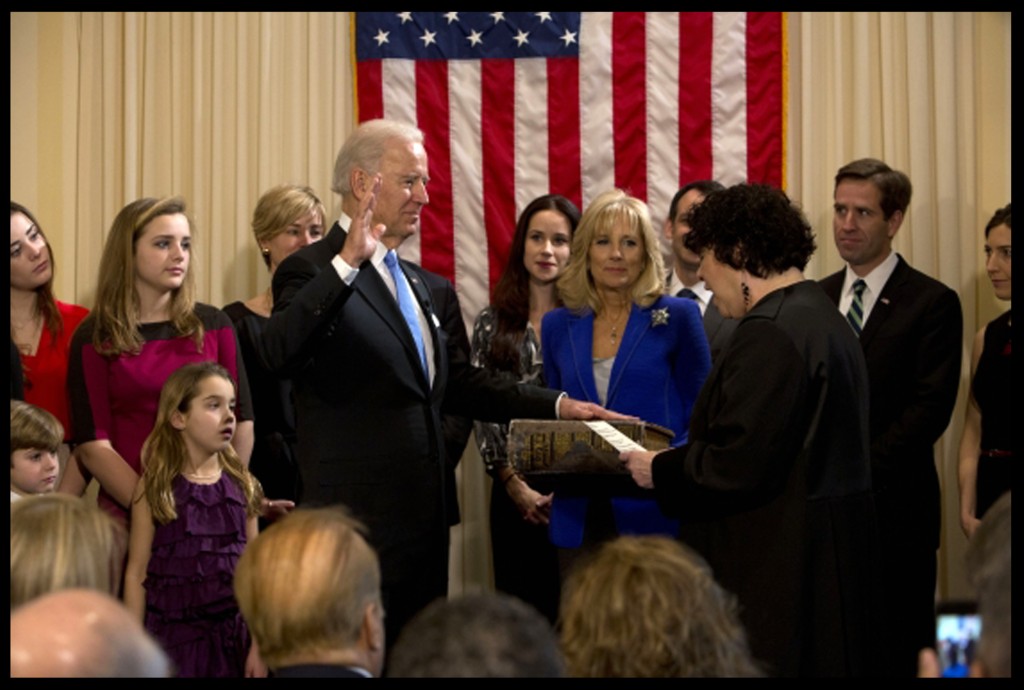 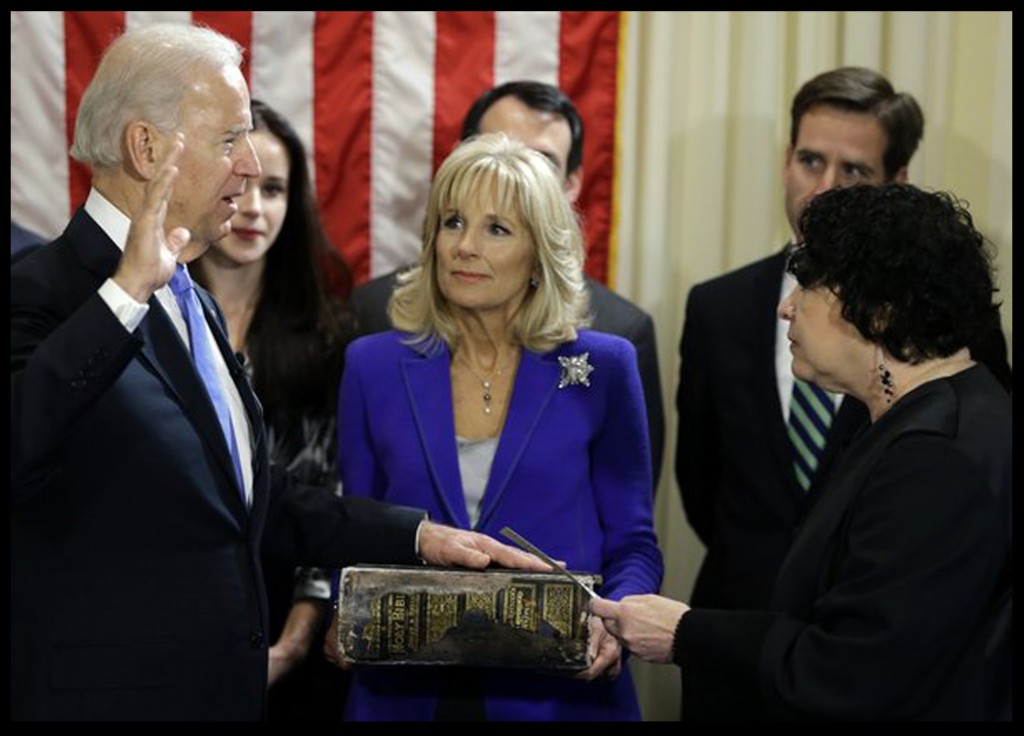 The oath of office was taken by Joe Biden on Sunday, January 20, 2013 as he began his second term as vice president:

I, Joseph R. Biden Jr., do solemnly swear that I will support and defend the Constitution of the United States against all enemies foreign and domestic; that I will bear true faith and allegiance to the same; that I take this obligation freely without any mental reservation or purpose of evasion; and that I will well and faithfully discharge the duties of the office on which I am about to enter. So help me God 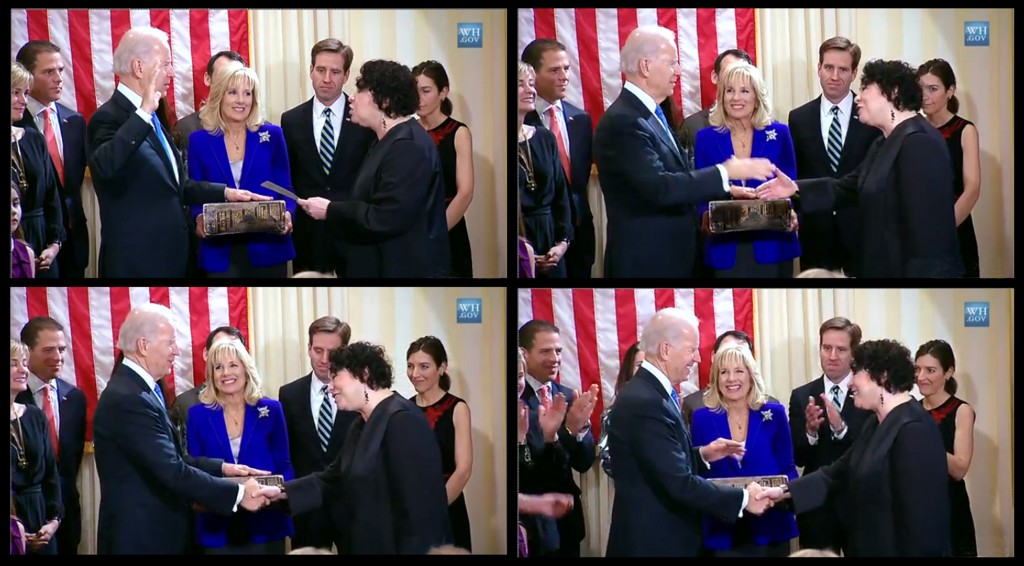 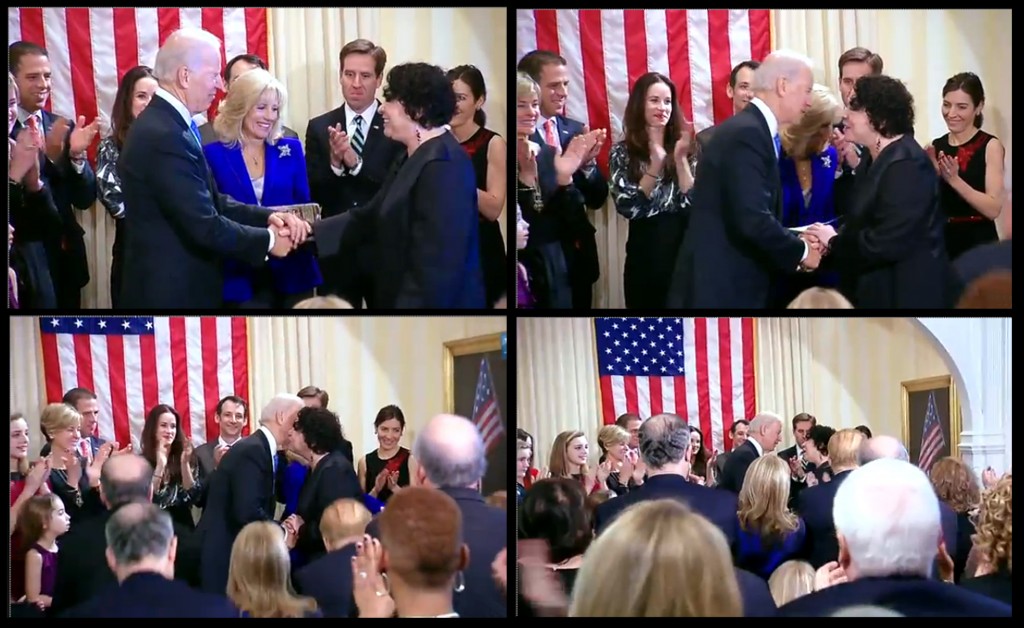 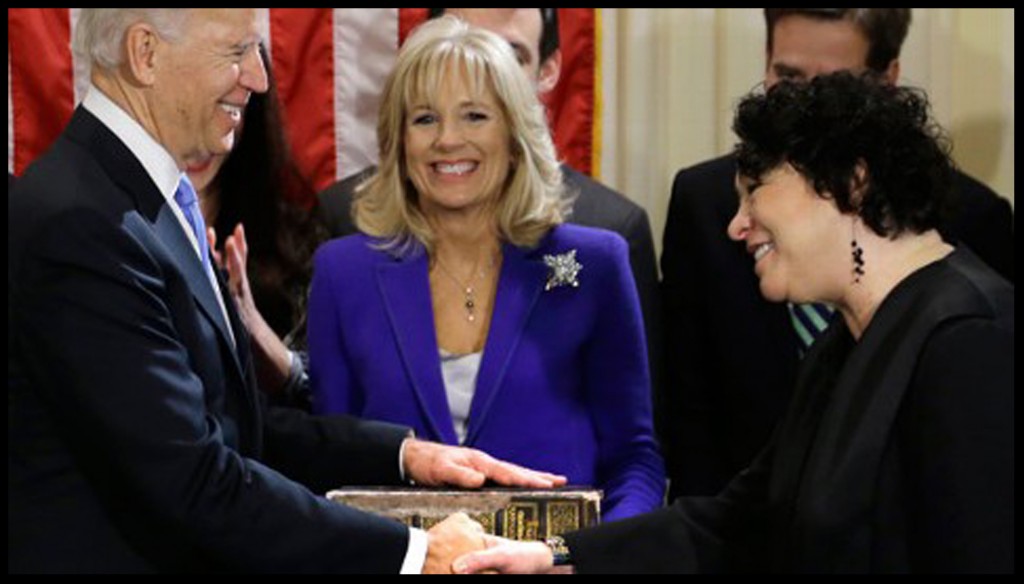 As mandated by the Twentieth Amendment to the United States Constitution, all presidents inaugurated since October 1933 begin their new term on January 20 at noon. Because January 20, 2013, fell on a Sunday, two ceremonies were scheduled. The official swearing-in of President Obama took place on Sunday, January 20, at the White House, while the official swearing-in of Vice President Biden took place on the same date at the Naval Observatory, his official residence. Chief Justice John Roberts administered the oath to the president and Justice Sonia Sotomayor administered the oath to the vice president. 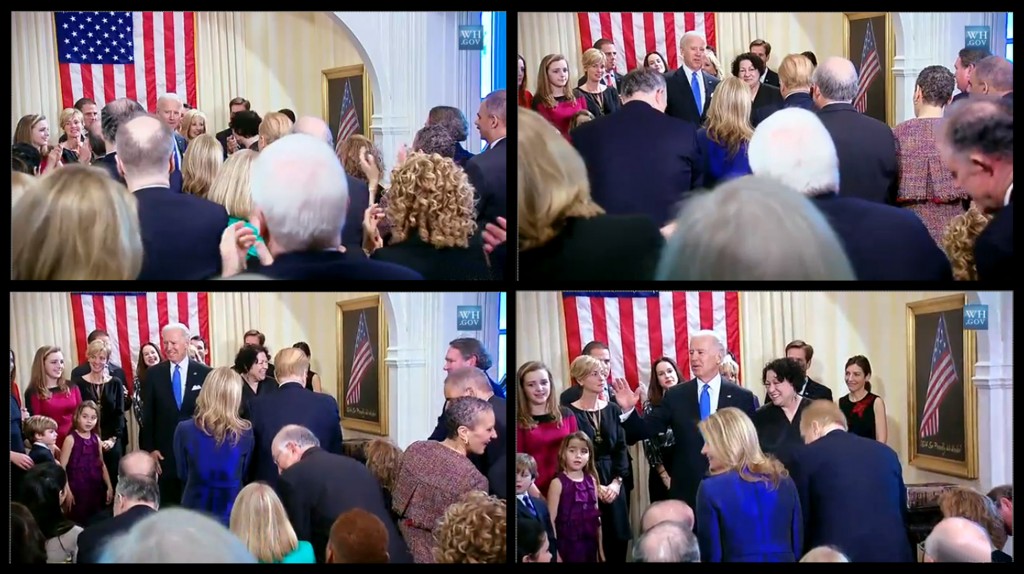 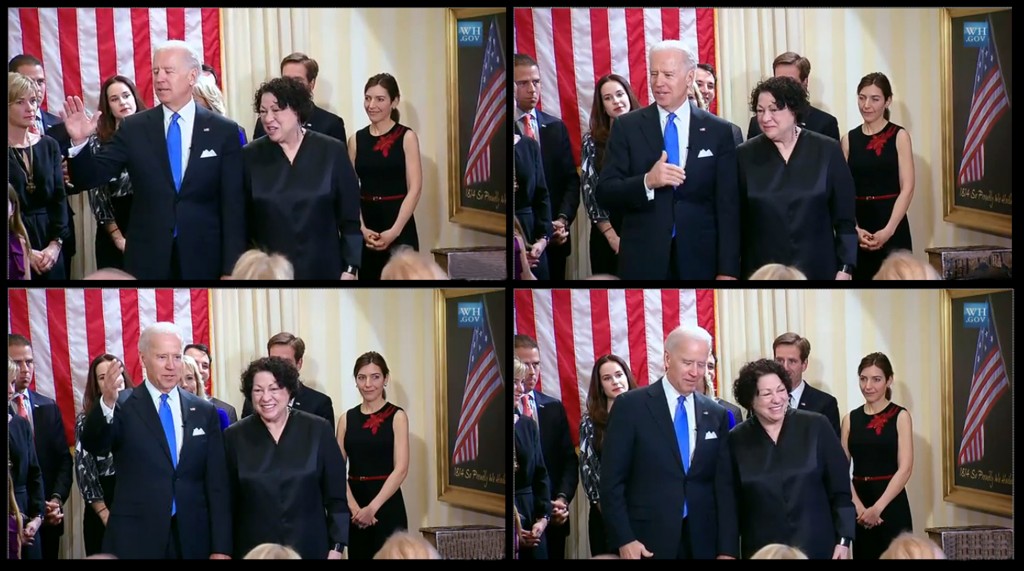 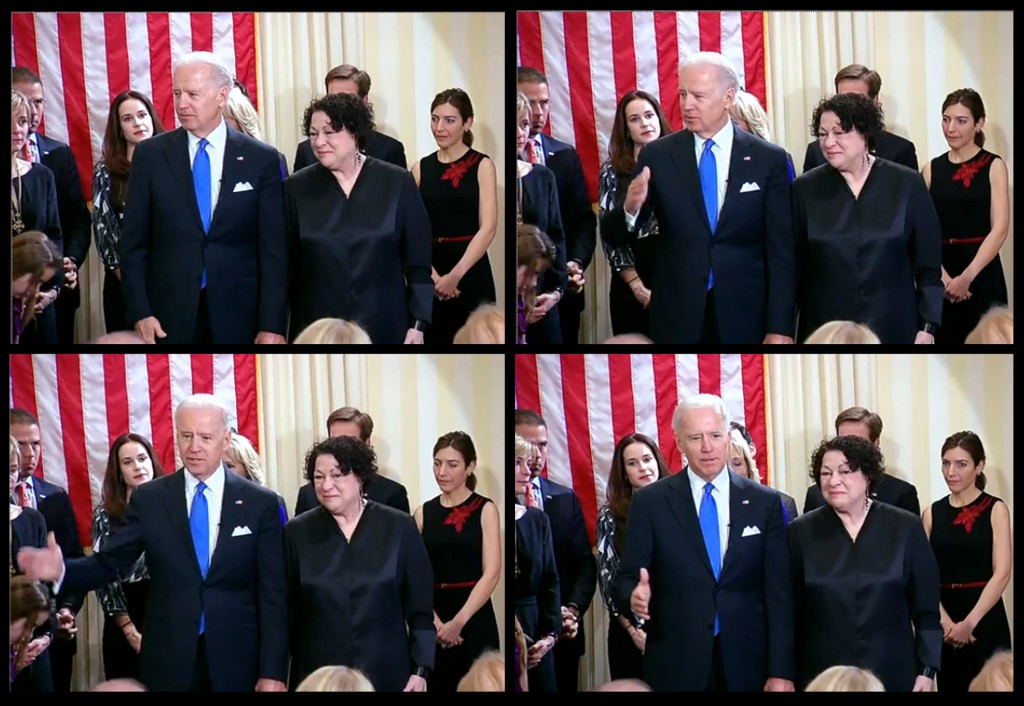 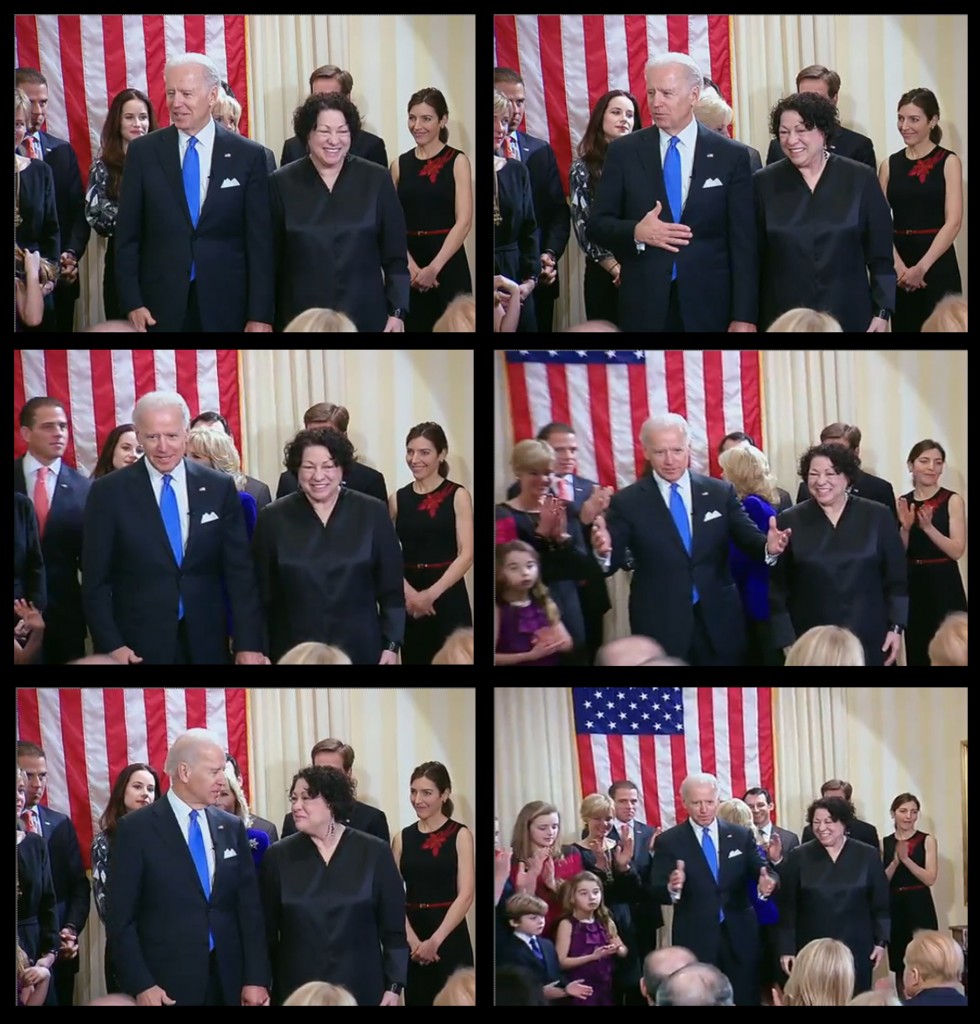 Generally, in an equal society we will see this event as not extra ordinary, but rather a joyful occasion for Vice President Joe Biden who took his oath of the office for second time.  But we still live in an unequal society and unequal world.  Some groups are rulers but majority of citizens who are less educated and poor are  busy with their lives trying to survive.  They have little chance to be in high positions.  Some people are able to educate themselves and able to work in high positions, a very good example is President Barack Obama, and a number of African Americans who are well educated and able to get jobs in high position.  But Hispanic people in the US until now see very few of their own in higher positions.

When Justice Sonia M. Sotomayor was elected as a Supreme Court Justice, she was the first Hispanic person to hold this high position.  Everyone is so glad because she can be a very good example for the younger generation of Hispanic descent.  This will encourage younger people to try their best to educate themselves and realize that there is a brighter future possible for them.  So when I saw Supreme Court Justice Sonia M. Sotomayor reading the oath to vice president Biden this make me smile and be happy.  We are reaching toward the perfection of equality.

I recently responded to one of my website viewers that, “We are in the world that is still improving and evolving.”  In this incident we are evolving and improving in the right direction.  It makes me very happy.  This is very good news.  Bad news can bring us down.  By the same token, good news makes us happy and this news is a good example for the younger generation and the rest of us.

Hopefully we can continue to improve evolving equality for all of our citizen and mankind.  This will help create the physical and mental well being that allows us to live in a peaceful and harmonious world.

Below is my response to, Brookyn, one of my website viewers.

Thank you for your comments.  I agree with you completely.  You are a very wise person who understands that without safety there will be no freedom and without freedom there will be no peace.  I like, and agree with you on, “it means to be free to do right things to express yourself in good way”.  You are mature enough to know what the right thing is and express yourself in good way.  But we are in the world that is still improving and evolving.  Some people are clever and mature, maybe due to the family and people around them taking time to cultivate their children.  But in some cases of broken families children are left alone to survive by themselves.  We may also have some of the people that did not behave in the right way and cause danger for society.

I am glad to know your memo (Gwendolyn).  She is very generous and punctual.  She came to see me today as she told.  I told her that about 90% of my costumers never come back to pick up the merchandise.  I do not care much about selling but I would like to be able to trust people.  My philosophy is that trusting is one virtue that no money can buy.

Thanks again for your comments on peace.  I hope to see you some day.  Please say hello to your memo for me.

Link to President Barack Obama, I Am Not Going To See This Again page: https://ingpeaceproject.com/events-president-barack-obama/i-am-not-going-to-see-this-again/