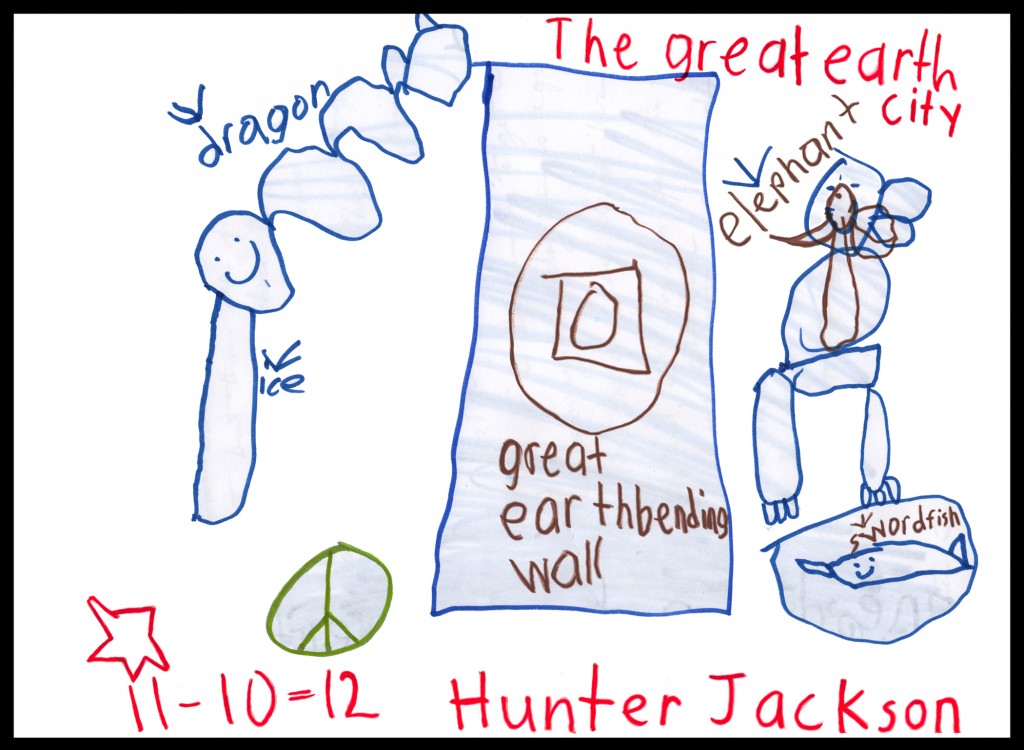 A long, long time ago there was a dragon named Show Kai.  He lived in China, and then he was banned.  He went to live in a desert.  Later he found the Great Earth Bending City, which was a place that the people can bend everything.  They did not need electricity.  They needed water and food.  They got food from the tea and dumpling store.  They made pottery from clay and something else.  One day there was the Earth Bending tournament to win the Earth Bending Belt and money. There was a Great Bending girl that no one can defeat.  She was blind but she can feel the movement.  One day the Avatar came.  He defeated her with Earth Bending, Fire Bending, Water Bending and Air Bending.  Then the dragon tried to break through the Great Earth Bending Wall.  He finally broke through and he drank all the water.

Hunter’s grandma called me about noon time saying she would like to know about Hunter’s lesson.  I thought I would like to give him a break from our usual math class because of Hurricane Sandy.  I told her that he can come for a lesson next week.  She said O.K. but he was in the shop with her.  I asked, “Do you think he would like to come?”  She said yes firmly.  I told her that if he would like to come then he can come at 3 P.M. as usual but I am not going to teach him any math lesson, he can do some drawing and he can make up a story.  Then I will post it on my website.  She said O.K.  Hunter came with his grandma about 3 P.M.  She showed me his math book from school that he needs to review.  I said O.K.

Hunter was glad to do some drawing.  I gave him paper and color markers.  He said he wanted to draw a dragon.  “Do you have a red marker?  I want to draw blood.  The dragon has a wound but he still can fight”, Hunter said.  “Would you do something nice, not violent?”  I told Hunter.  “O.K. then he has ice” After Hunter finished his drawing we worked on his math review for one chapter then I asked him to tell the story from his drawing.  I noted down what he told me.  John helped to correct the writing for the final touch.