Despite spending much of his life without the company of children, Mandela became famous for his ability to make connections with the very young.  Here he helps a blind child to find out what he looks like.  The village of Qunu, not much changed from the days when Mandela spent his childhood here.  This is the house he stayed in, the property of Thembu Paramount Chief Jongintaba Dalindyebo, who took in the boy and his mother after Mandela’s father, also a chief, was deprived of his property following a disputed with magistrate.  Mandela’s father had four wives; his mother Noqaphi Noscheni was the third wife.

Peace?  Trust no one

I can understand how you feel

There was disappointment and trouble in my younger life

But I never lost hope

At least I trusted myself

And behaved in such a way that others could trust me

If I want to trust others

I have to show others are able to trust me

We all go through life

Knowing some bad and good people

We learn and change

If we show kindness to others

There is a chance to receive kindness in return

I was sad about some of my troubles in life

But when I study about Nelson Mandela

Who passed away this month at the age of 95

I feel that I am a lucky person

He was jailed for twenty seven years

But was able to walk tall when he was freed

He over came his bitterness

Trusted people and people trusted him

People all over the world praised his good deeds

He is honored and admired

Just as Gandhi and Dr. King were admired

By being only a one term president

Mr. Mandela showed he was not greedy to hold on to power

He prevented civil war between black and white South Africans

He helped to raise funds to educate poor African children

And encouraged the fight against Aids

Mr. Mandela said his 27 years in prison gave him time to think

He educated other prisoners and cultivated a little garden

Growing tomatoes and other vegetables

His conduct earned him the respect of his jailers

When you are with Nelson Mandela

You want to be a better person

I too want to be a better person

After studying the life of Nelson Mandela

Peace? Trust no one

If you help others to the best of your ability

You will find others you can trust

Who in turn will trust you

And give help when it is needed

Then you will achieve a successful life

With happiness and peace in your heart

Rolihlahla Dalibhunga Mandela was born in 1918 and raised in the village of Qunuin theTranskei, a small village in South Africa’s eastern.  He was one of 13 children, a youngest son of a counselor to the chief of the Thembu clan.

As a young man, Nelson Mandela was a keen boxer.  “Boxing is egalitarian.  In the ring, rank, age, color and wealth are irrelevant.” he wrote in his autobiography, Long Walk to Freedom.

Nelson Mandela married his second wife Winnie Madikizela in 1958, and they have two daughters.  They never enjoyed much of a family life as they were both in and out of jail.  They divorce in 1996.

Right-Nelson Mandela revisited his cell several times after his release.

After more than 27 years in detention, Mandela walks out of Victor-Verster Prison in Paarl on February 11, 1990, accompanied by his wife Winnie.

Right- Nelson Mandela and FW de Klerk were jointly awarded the Nobel Peace Prize at a ceremony in Oslo,Norway on December 10, 1993 for their roles in ending apartheid.  FW de Klerk would go on to serve as one of Mandela’s deputy presidents.

Left-Mandela takes the oath on May 10, 1994, during his inauguration in Pretoriaas the country’s first back president. “The time for the healing of the wounds has come,” Mandela said.  “The moment to bridge the chasms that divide us has come.  The time to build is upon us.” 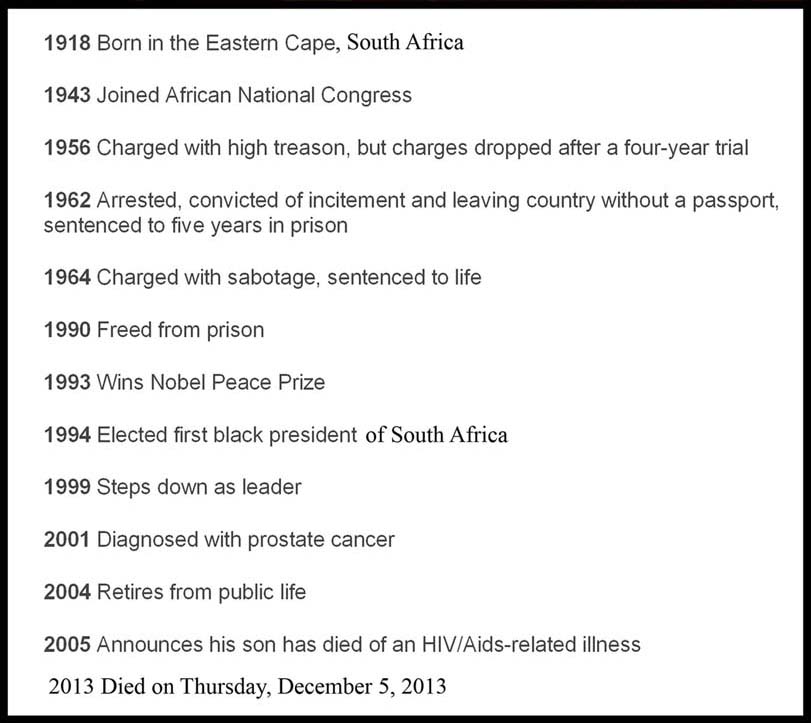 We come and go

To somewhere no one knows

Left on earth is what we did

When we were still alive

Wishing he would live forever

Wishing he had gone sooner

Or was never born

What will people think when

And others who want to keep

The power over people forever

What will people say?

Ten, fifty, or a hundred years is only a drop

We will be gone sooner or later

For we do not live forever

What are you doing Bashar Hafez al-Assad?

They are your people

Please, I beg you not to create

You are eighty nine years old

You still want to be president

What are you thinking?

That you will live forever?

Oh, yes both of you will live

Thousands years or longer in history

Will both of you and others hungry for power

Be good examples for future generations?

Or will future generations learn from Nelson Mandela

You who are alive

About what you are doing

Be part of those that keep peace

Between black and white in his country

For the next generation

If only one day you think of Mandela

Please hear this from

“Time for the healing of the wounds has come.

The moment to bridge the chasms

That divide us has come.

We understand it still that

There is no easy road to freedom.

We know it well that

None of us is acting alone can achieve success.

We must therefore act together as a united people,

For the birth of a new world.

Let there be justice for all.

Let there be peace for all.

Let there be work, bread, water and salt for all.

Let each know that for each the body,

The mind and the soul have been freed to fulfill themselves.

Never, never and never again shall it be that this

Of one by another and suffer the indignity

Of being the skunk of the world.”

Please visit In Memory of Nelson Mandela page for more information and pictures: