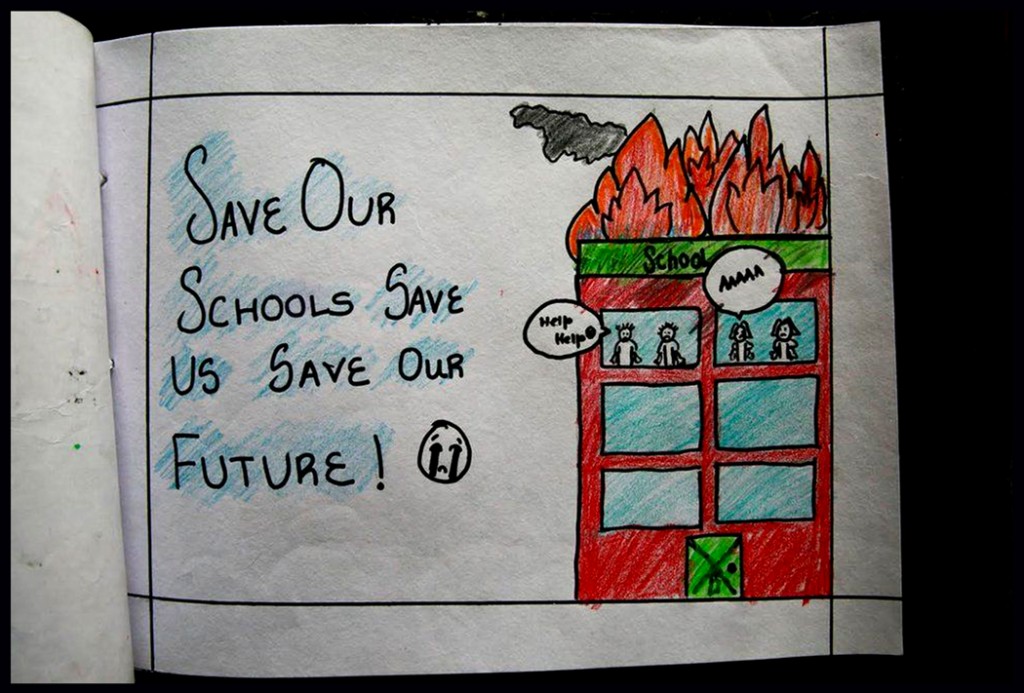 The stolen childhoods of Kashmir in pencil & crayon & Ing’s Poem 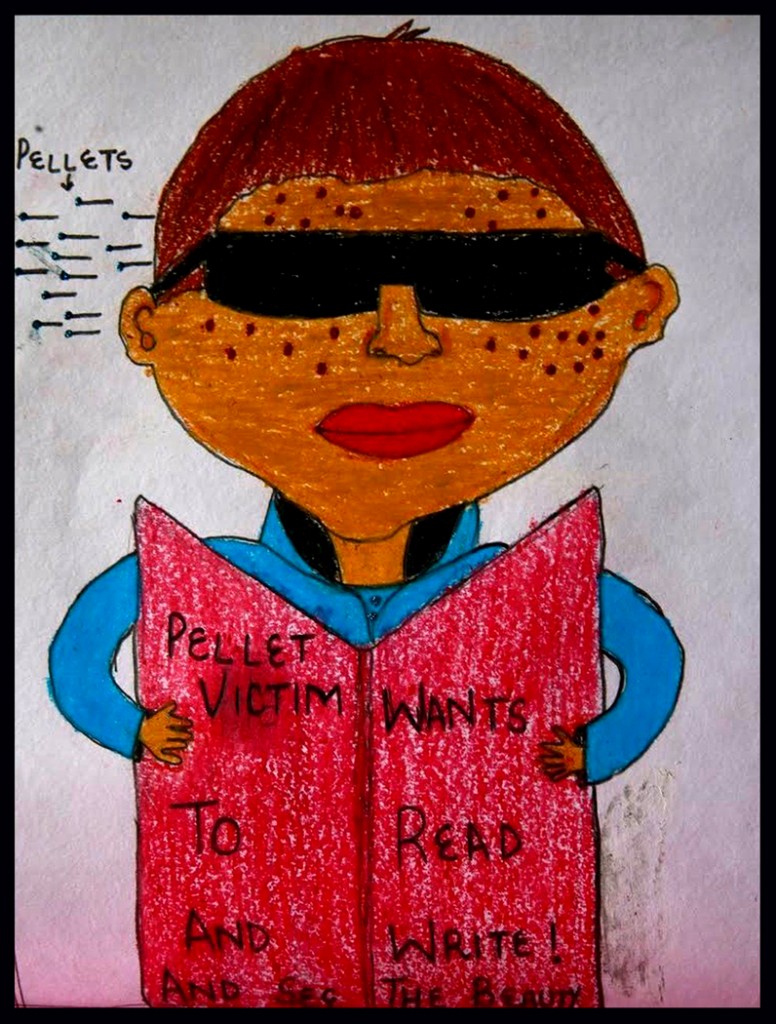 These are pictures of loss of childhood and innocence. They speak about a violent world outside shuttered homes. They reveal the terrors of the present and the fears for the future.

The colours are vivid. Red dominates, in blood and fire. Black is an ascendant colour, clouding the skies and scorching the earth. It’s not dark yet, but it’s getting there.

The artwork is by schoolchildren in Indian-administered Kashmir, home to one of the world’s most protracted conflicts. These days, they mostly depict childhoods ruined by the violence of adults.

The meadows, streams, orchards and mountains that make their home “heaven on earth”, as a Mughal emperor once exulted, is missing in much of their work. Stone-throwing protesters, gun-toting troops, burning schools, rubble-littered streets, gunfights and killings are some of the anxious, recurring themes on the canvas.

Last summer was one of the bloodiest in the region for years. Following the killing of influential militant Burhan Wani by Indian forces in July, more than 100 civilians died in clashes with security forces during a four-month-long lockdown in the Muslim dominated-valley.

Security forces fired metal pellets from shotguns into protesting crowds, leaving many blinded. More than 1,200 children below the age of 15 were among some 9,000 people injured in the protests. Most of them, according to reports, were “young, [and] were either blinded completely or lost their vision in one eye”.

As violence spread on the street, schools shut. Children stayed indoors for months, drowning in the noise of TV news. At other times, they read and drew. They missed their friends and cricket games. Teachers gave lessons at home, and parents invigilated during home exams. One school even held an exam in a small indoor stadium. 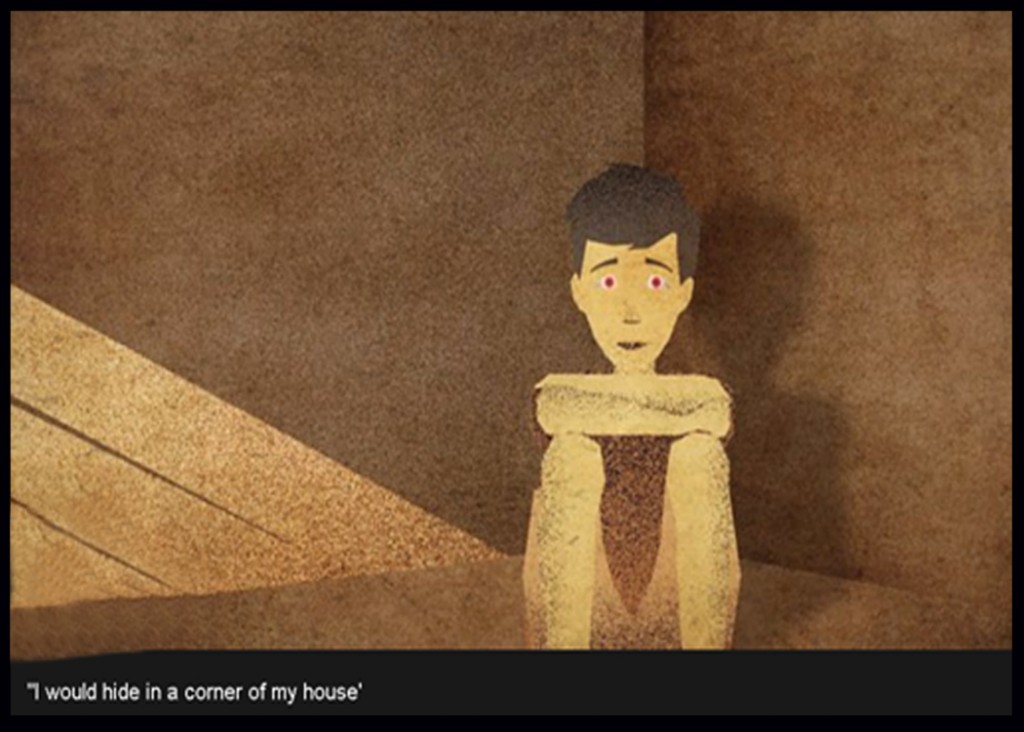 “I would hide in a corner of my house’ (Video production: Shalu Yadav and Neha Sharma) 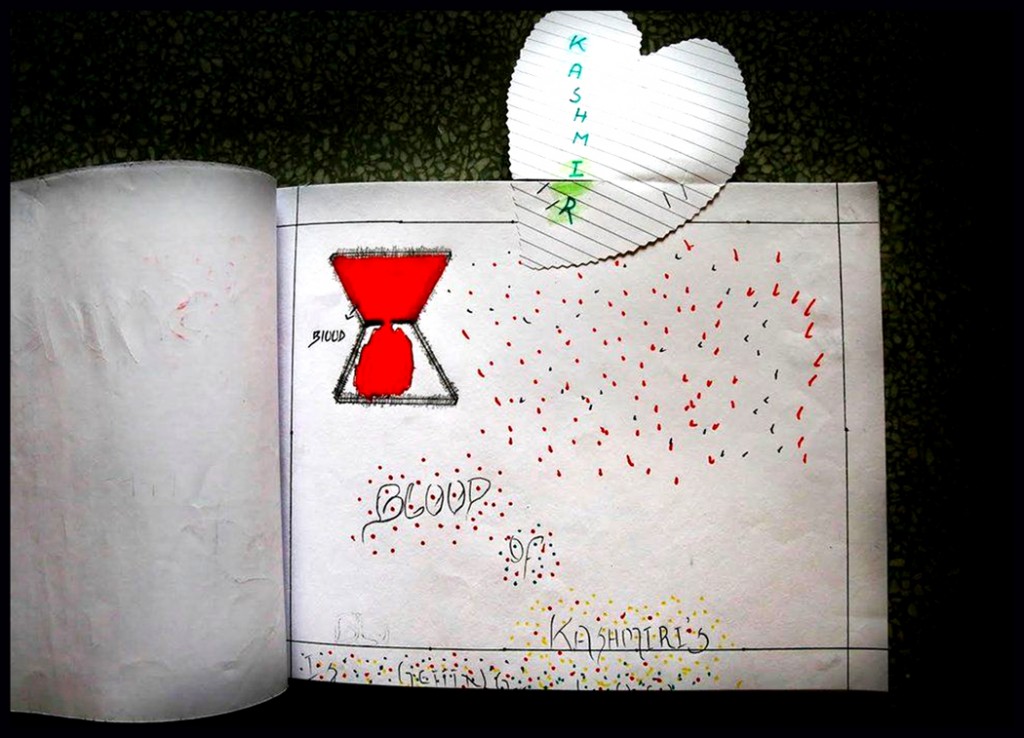 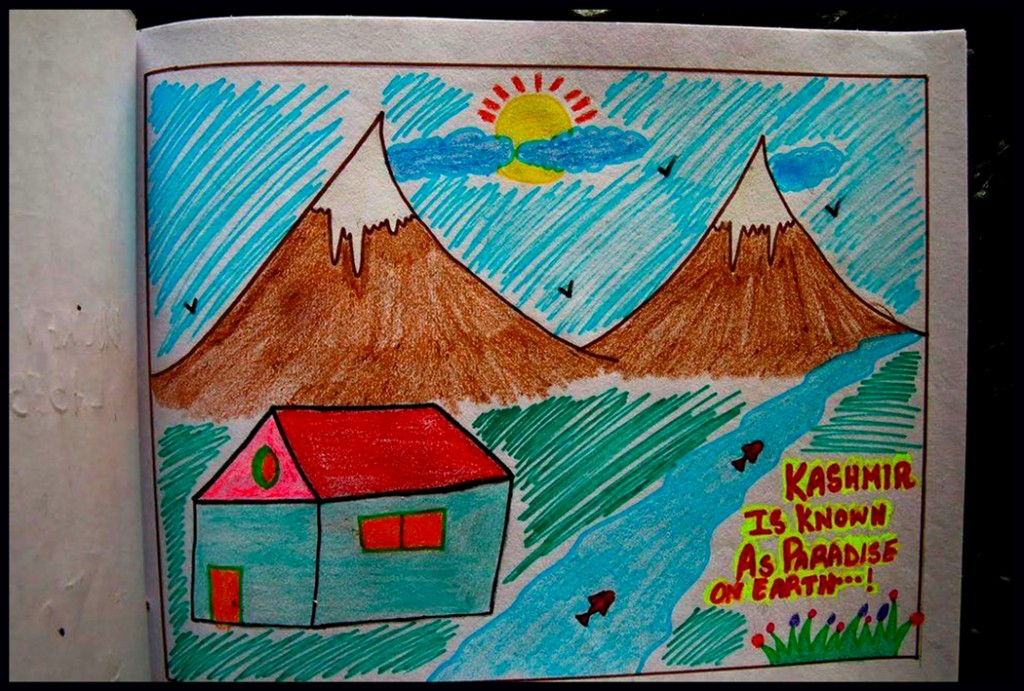 When the schools reopened in the winter, teachers found many of the students irate, nervous and uncertain. They were children of government workers, businessmen, doctors, engineers, bankers and farmers.

They came looking “pale, like zombies”, the principal of a leading school told me.

They cried and hugged each other. Having spent months cooped up in their homes in near-captivity, they asked their teachers why they had closed the school. Some of them behaved strangely. They screamed without any reason, banged the tables and broke furniture. Counsellors were called in to calm them down.

“There was anger, a lot of anger,” the principal said.

Then, some 300 of them went to a school hall and sat down with paper and pastels. And they drew furiously.

“That’s all they did on the first day. They drew what they wanted. They didn’t utter a word. It was all very cathartic.”

‘I cannot see the world again’

The children drew mostly in pastel and pencil. Many wrote over their pictures, using speech bubbles, headlines and sentences.

In many of their pictures, the valley is on fire, and streets are littered with the black detritus of rioting against an incongruent backdrop of a blazing sun and birds in the skies.

Then there are young faces scarred and eyes blinded by pellets. It is a recurring, heart-wrenching theme.

“I cannot see the world again and cannot see my friends again. I am blind,” says the subject of one such haunting image.

Childhood is the kingdom where nobody dies, as a poet wrote, but in Kashmir, children have lived in the shadow of death for as long as one can remember. There are bodies lying on the street, and there are people on fire in the paintings.

“These are the mountains of Kashmir. And here’s a school for kids. On the left are army men and opposite them are stone-throwing protesters who are demanding freedom,” said a schoolboy in Anantnag, explaining his drawing. 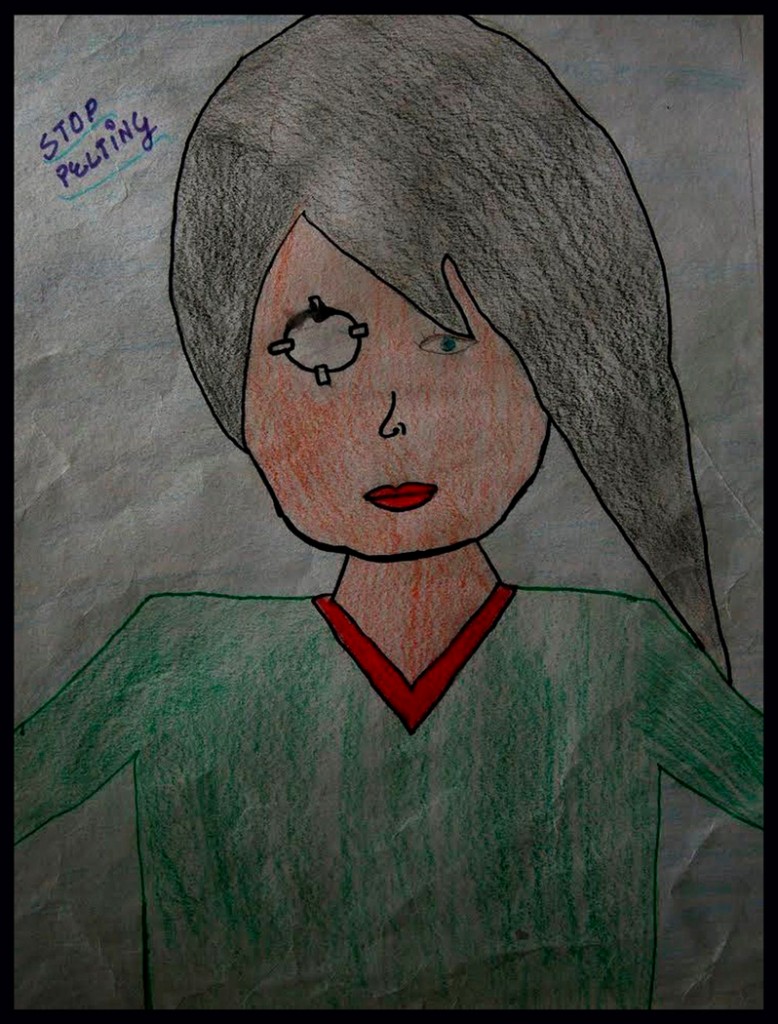 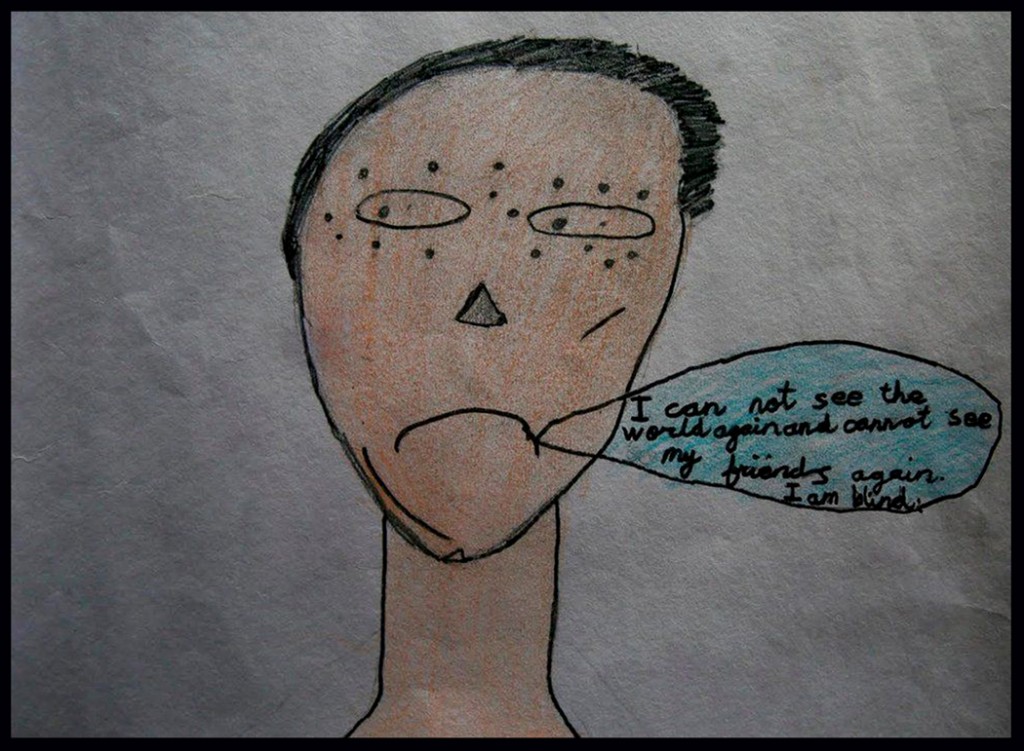 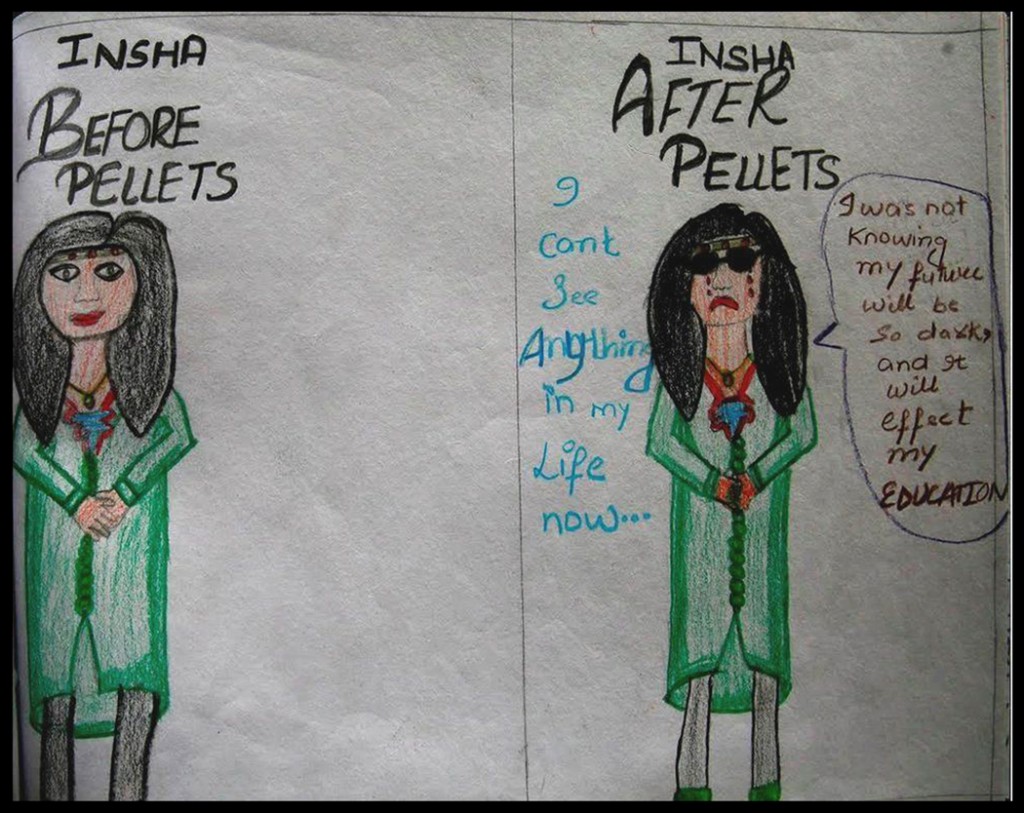 “When protesters throw stones at the army, the army opens fire at them. In the crossfire, a school kid dies and his friend is left alone.”

The other recurring theme – and nightmare – is the burning down of schools. There’s a powerful picture of children trapped in a school on fire, screaming, “help us, help us. Save our school, save us, save our future”.

Others are angrier and more political.

There are drawings with pro-freedom graffiti, and signposts which say Save our Kashmir in pastels. Others extol Burhan Wani, and resonate with anti-India slogans. There are maps of Kashmir oozing red.

In another village in southern Kashmir, a prominent artist found children drawing Indian flags fluttering on top of their houses.

A scowling face of a man split into two is a metaphor for the bitter and festering rivalry between India and Pakistan, and the tragedy of a land sandwiched between the rival neighbours.

There’s a heart-breaking pencil drawing of a mother waiting for her son. The children also vent their frustration over the shutdown of internet and mobile phone services during the protests.

Five years ago, Australian art therapist Dena Lawrence conducted some art lessons with young people in the valley. She found black was the predominant colour in their paintings, and most of them reflected “anger, rage and depression”.

Kashmiri artist Masood Hussain, who has been judging art competitions for children aged four to 16 for the past four decades, says their subjects have changed.

“They have gone from the serene to the violent,” he tells me. “They draw red skies, red mountains, lakes, flowers and houses on fire. They draw guns and tanks, fire-fights and people dying on the street.”

Arshad Husain, a Srinagar-based psychiatrist, says the artwork of the children in the valley betrays their collective trauma. 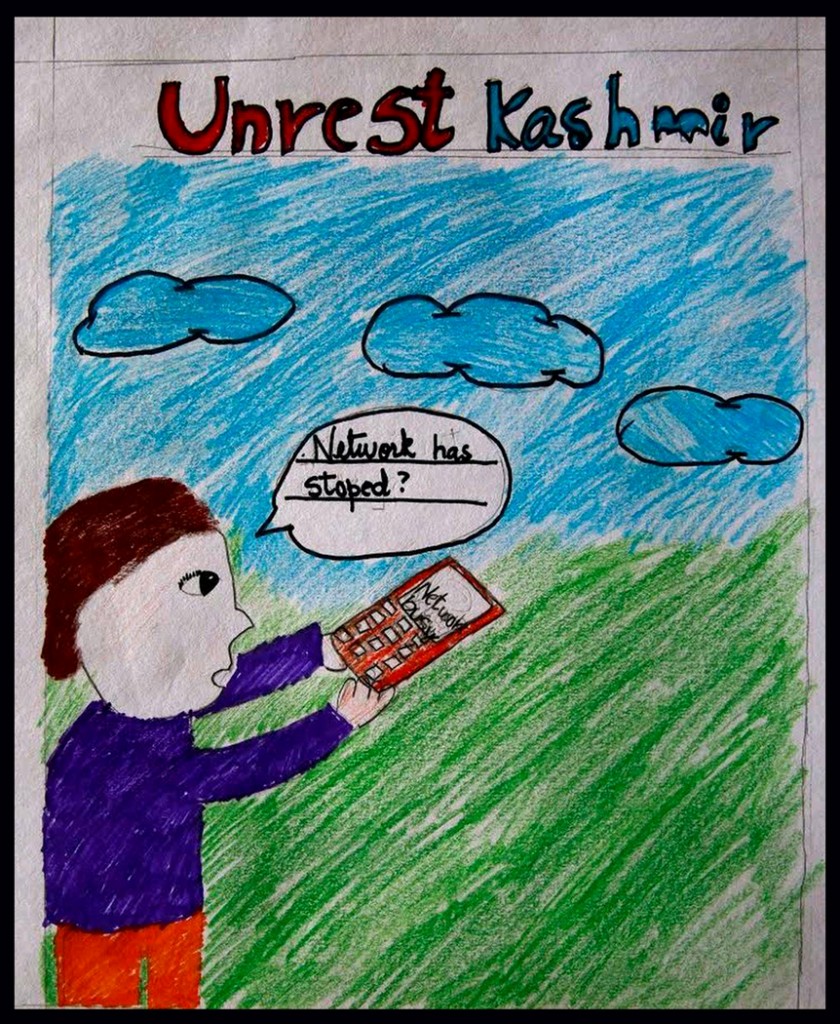 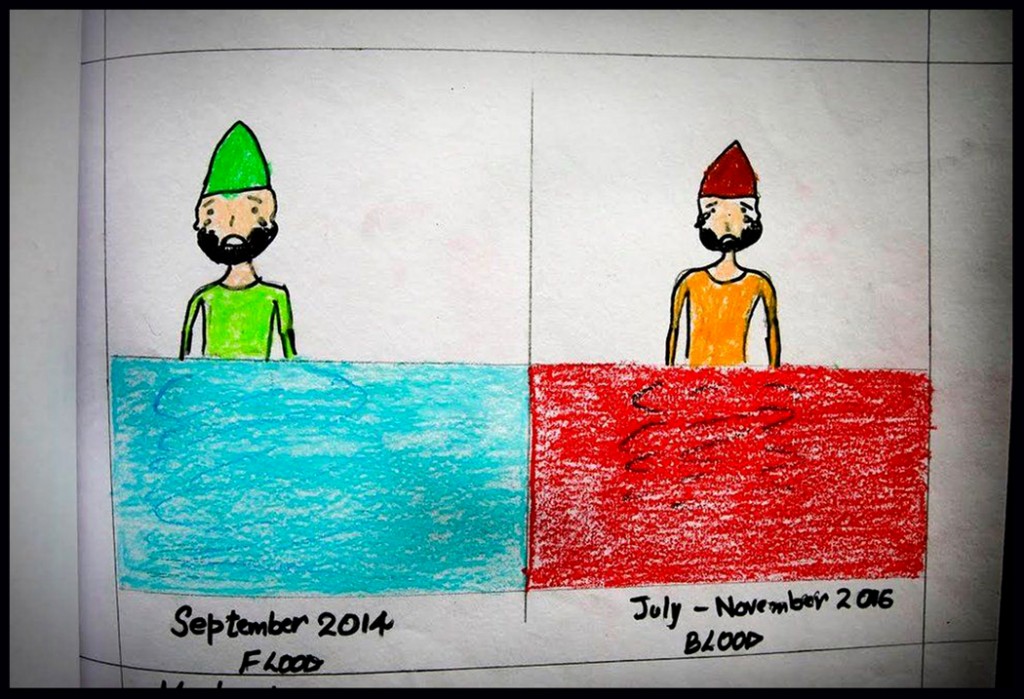 “We think children are too young to understand. That’s not true. They absorb and assimilate everything around them. They express it in their own way,” he says.

“Mind you, most of this artwork is coming from children who stayed at home. Imagine the children on the streets who are closer to the violence.”

It is all reminiscent of children’s art inspired by 9/11: weeping children, the twin towers on fire and being yanked off the ground by Osama Bin Laden against a blood-red skyline, a scarred girl wearing an I Love New York T-shirt. 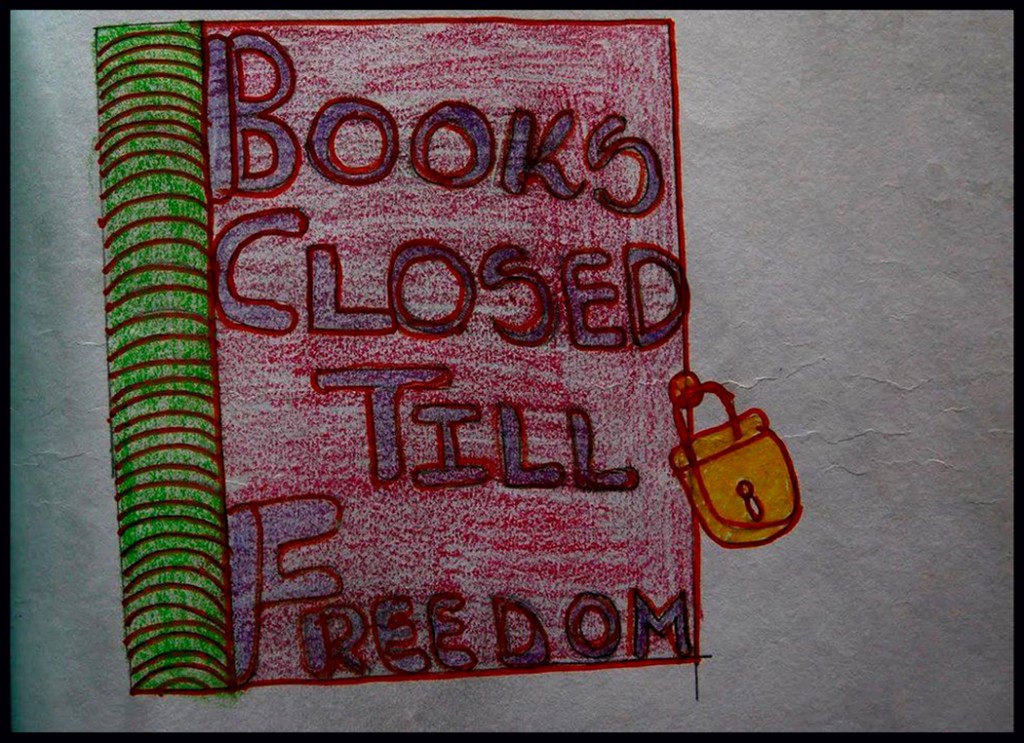 In Kashmir, where fairy tales quickly turn into nightmares, hope is not extinguished yet.

Let our future be bright, make us educated, don’t make this crisis a reason for darkness, pleads a girl in a drawing. It’s never too late. 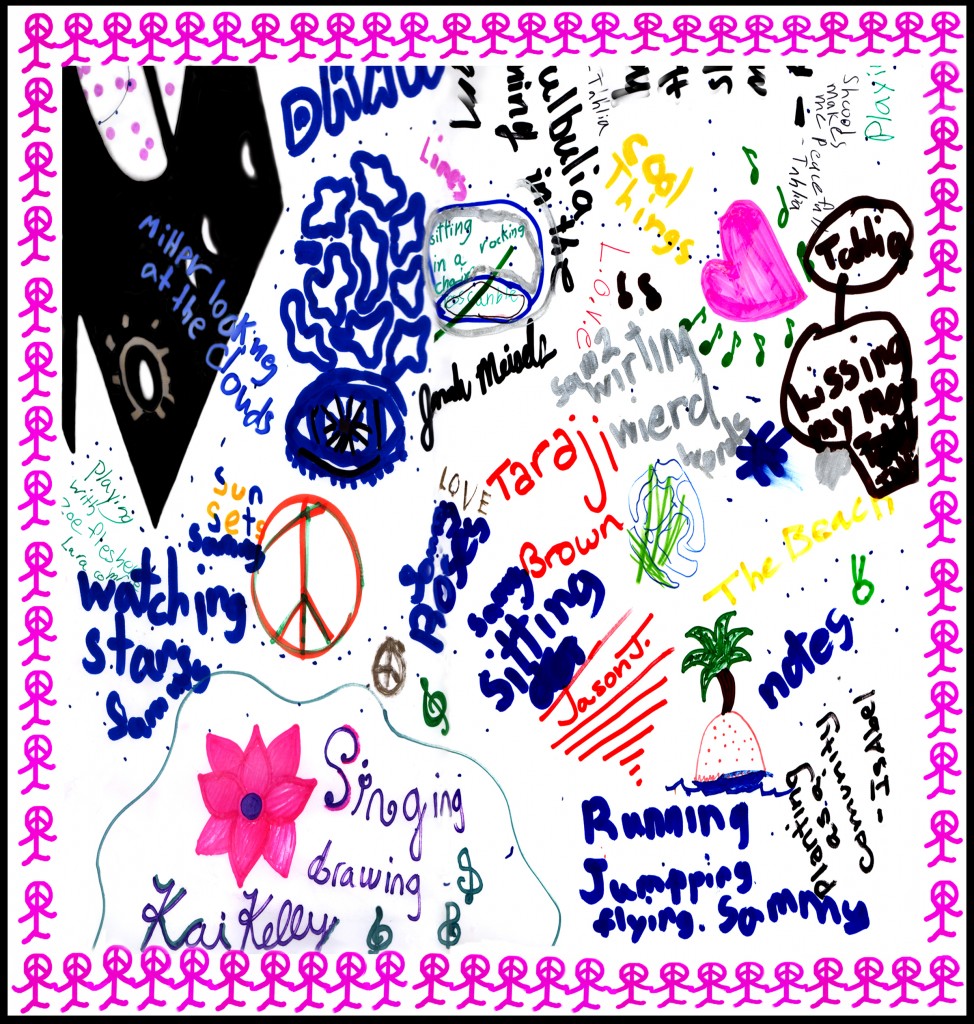 The following are Far Brook School and ST. Phillips Academy in Newark, NJ, Ben’s 2nd grade and two 4th grade classes also, the adults Comments and artwork on “What does Peace mean to you?” Shadow of Peace poster 5:

Planting as a community

I included “Ing’s Peace Project and Far Brook School & ST. Philips Academy in Newark, Ben’s 2nd grade and two 4th grade classes also, the adults Comments and artworks”, into this project because I would like to show how the children in a country without war expressed in writing and artwork.  Their comments and artwork are opposite. When adults make decisions to do something, they have to keep in mind how it is going to affect little children.  This can apply to families that have no war experience, but when parents fight or neglect children then the result will be as bad as affects on children in the war torn countries, such as is expressed in the following news on, “Texas toddlers die ‘after left intentionally in car for 15 hours’”. 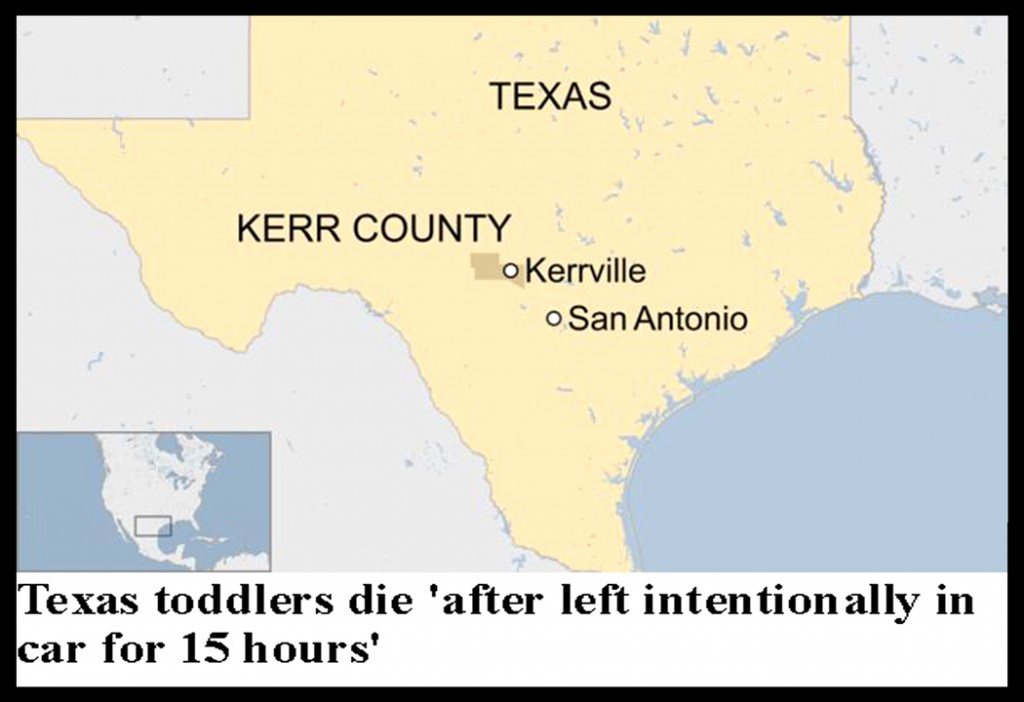 Texas toddlers die ‘after left intentionally in car for 15 hours’

Two young sisters have died in Texas after their mother allegedly left them in a car for 15 hours in temperatures of up to 32C (90F).

Her daughters cried during the night but she ignored them, a sheriff said, and returned only at noon the next day.

Ms Hawkins has been charged with two counts of child endangerment.

Kerr County Sheriff Rusty Hierholzer said it was the worst such case he had seen in 37 years on the force.

Ms Hawkins left one-year-old Brynn Hawkins and two-year-old Addyson Overgard-Eddy in the car to visit a 16-year-old male friend and others at a house in the town of Kerrville, 65 miles (105 km) north-west of San Antonio.

The sheriff said the male friend had at some point slept in the car alongside the children but they were not let out.

Ms Hawkins finally took the children out at noon the next day and found them unconscious.

She tried the bathe them, the sheriff said, but fearing she would get into trouble did not seek medical help immediately.

Only after a friend suggested it did she take them to the nearby Peterson Regional Medical Center.

She reportedly told staff that she, the teenage male and the children had been at a nearby lake and the girls had “collapsed after smelling flowers”.

“They thought maybe they’d gotten into something poisonous – that’s what the story was,” Sheriff Hierholzer told the CNN affiliate station KABB.

“She left them in the car – intentionally in the car – while her and the 16-year-old male friend were in the house,” he said.

The girls were quickly taken to the University Hospital in San Antonio but died at about 17:00 on Thursday.

Police say the charges may now be upgraded.

Ms Hawkins’ husband was reportedly not present during the incident.

I was preparing the project about article, “The stolen childhoods of Kashmir in pencil and crayon”.  I feel very bad and sad for the children in Kashmir.  This morning I went to the BBC News website to check on the current news; I found the news article, “Texas toddlers die ‘after left intentionally in car for15 hours”.  This news provoked my thoughts about human behavior in all parts of the world.  One has to be educated and conscious in everything everywhere.  An accident can happen anytime and anywhere but if the result of the accident came for ignorant or selfishness people then we have to exam the way that society behaves.  It is so sad when bad things happen to anyone but it is worse when that accident causes innocent children to suffer or lose their lives from the adult’s action. 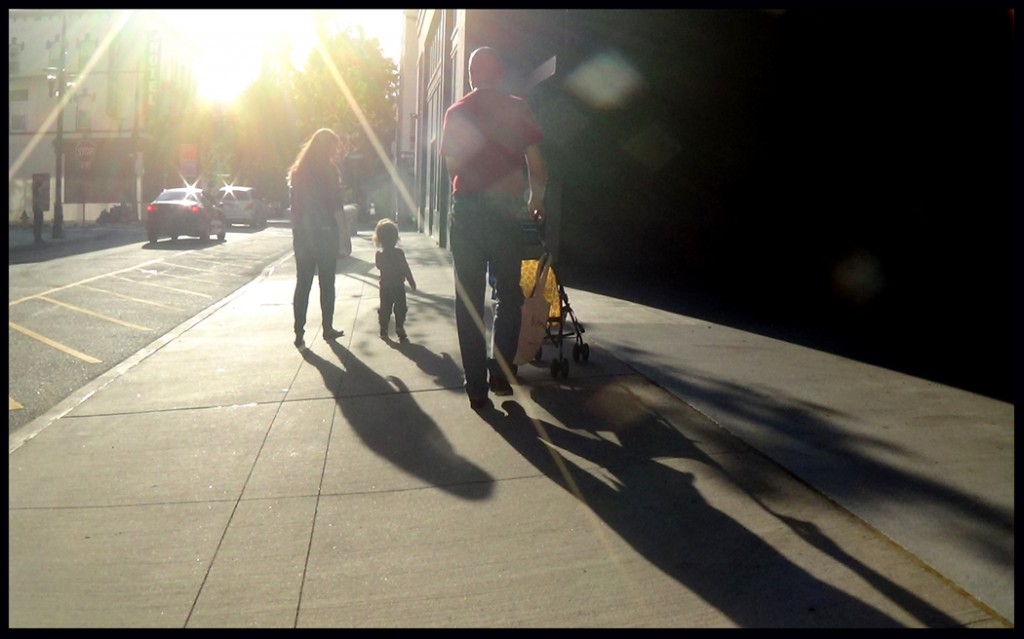 Face to the Sun with Three Generations

Grandpa helping with the baby carriage

Mother walks close to her son

In the parameter of the sun rays

Their shadows shine upon the ground

To the next generation

Forming a link of chain

Continuing to nurture and progress

With separation and despair

The end of the link become weak

For all the adults and the leaders of countries at war

Remember that your children are going to suffer

From the action that you created

Wise men and women will want

To see their children grow and glow

Then peace will come

When you are closing your eyes

And taking your last breath on earth

On Friday, May 31, 2017 about 5 pm I was walking our grandson home from the play ground at the Military Park.  Just before we reached to the intersection of Halsey Street and New Street I met my husband and our daughter wanting to see me and our grandson in the park.  We decided to walk home.  I saw the evening sun rays shining on my husband, daughter and grandson, and the three shadows cast upon the ground.  I took some photos of this image with my camcorder.  When I saw the pictures I decided to write a poem about this beautiful moment.

I saw the article from the BBC News on “The stolen childhoods of Kashmir in pencil and crayon”.  I thought about my poem, in which I talked about the war torn countries causing so much trouble to all their citizens, especially the children, who will suffer the most.