Nelson Mandela’s funeral was on Sunday, December 15, 2013, the funeral service accompanied a mixture of rituals. His body was escorted by a full guard of honor and marked by a 21-gun salute, while warriors in traditional Xhosa dress chanted and danced.

There was a gathering of leaders from around the world in South Africa. Even though Nelson Mandela had gone, his legacy of political and other contribution to the society will be remembered always.

Another of his legacies was that for the first time in history, Nelson Mandela’s death brought people of all races, faiths, ages and income levels together to grieve as one in South Africa. 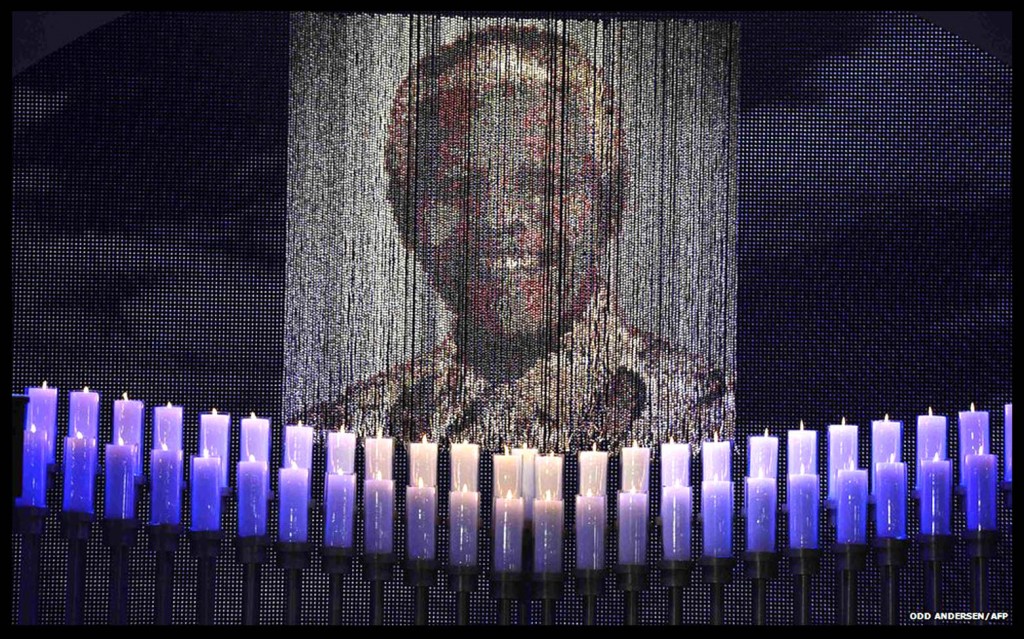 Inside the marquee, Nelson Mandela’s portrait had been placed behind 95 candles, representing one for each year of the late president’s life.

A military honor guard lines the route for former South Africa president Nelson Mandela’s funeral procession as it makes its way to his final resting place in his home village of Qunu, on Sunday, December 15, 2013. 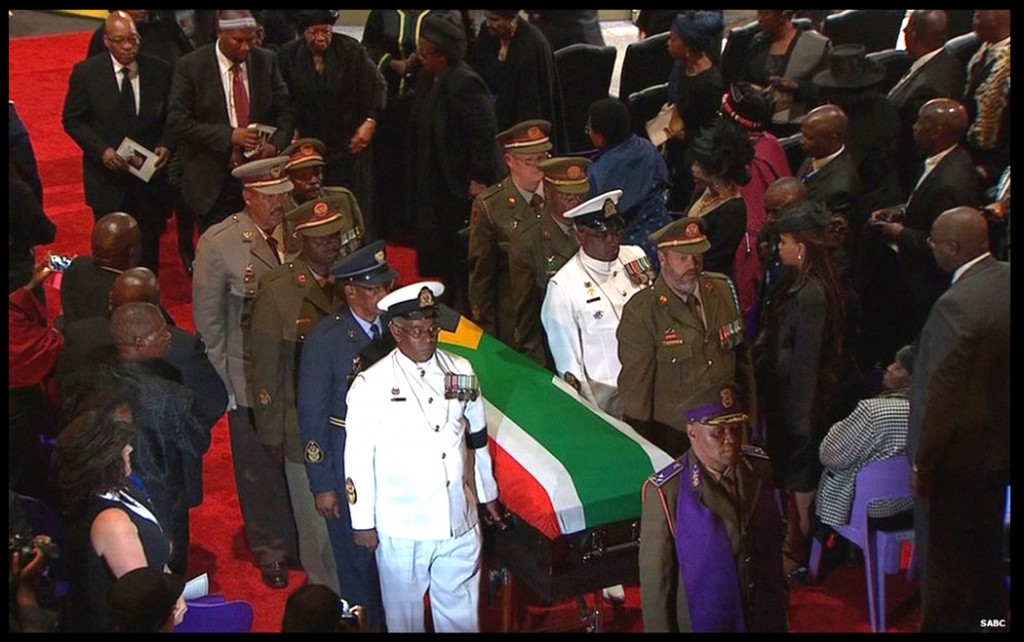 At the end of memorial ceremony a military guard of honor carried Nelson Mandela’s coffin, draped in the South Africa flag, out of marquee as the audience sang.

A marching platoon of the presidential guard, wearing green ceremonial uniforms and carrying rifles with fixed bayonets, escorted the coffin, which had been transferred to a gun carriage, to the burial site.

Member of the South Africa Navy lined the road from the Mandela family house to his burial site in Qunu.

Left-Soldiers stand at attention over former South Africa president Nelson Mandela’s casket before his burial in his home village of Qunu, Sunday, December 15, 2013.

Right-Nelson Mandela was laid to rest following a short graveside sermon by Bishop Siwa.  As a military bugler played the Last Post, followed by Reveille, the pall bearers saluted and then withdraw as did the cameras, allowing the Mandela family a private moment at the graveside. 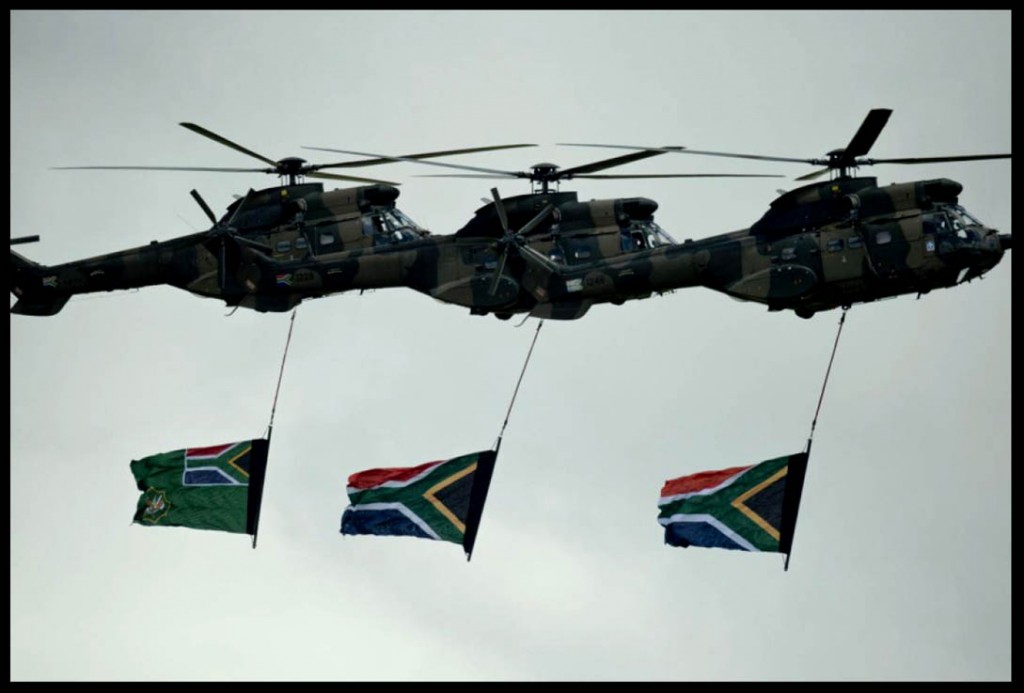 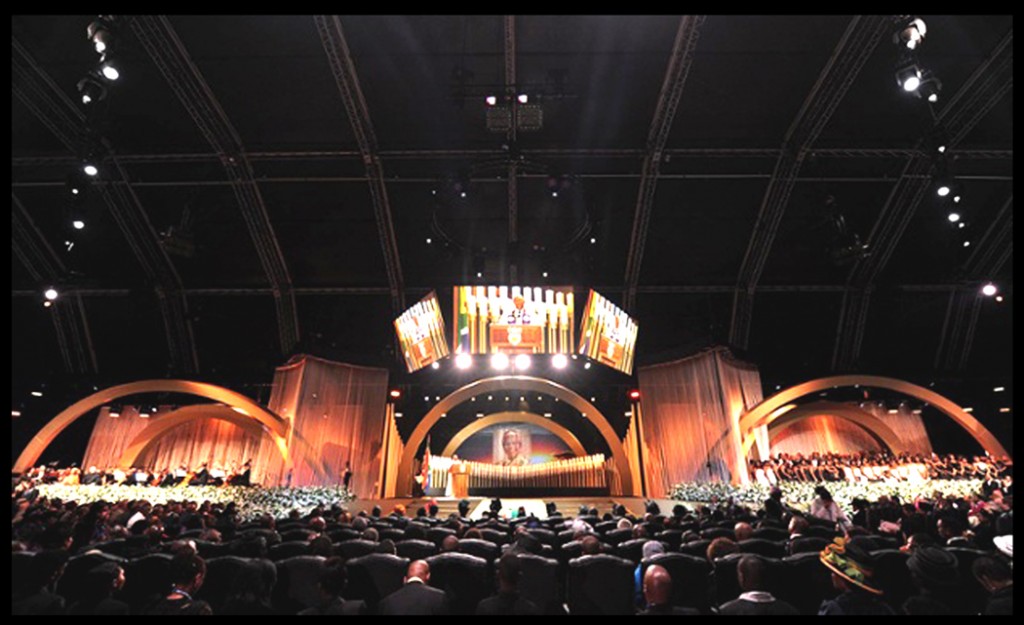 Inside the marquee guests listen to the speeches contributing to the late former South Africa president Nelson Mandela at his home village of Qunu, on Sunday, December 15, 2013. 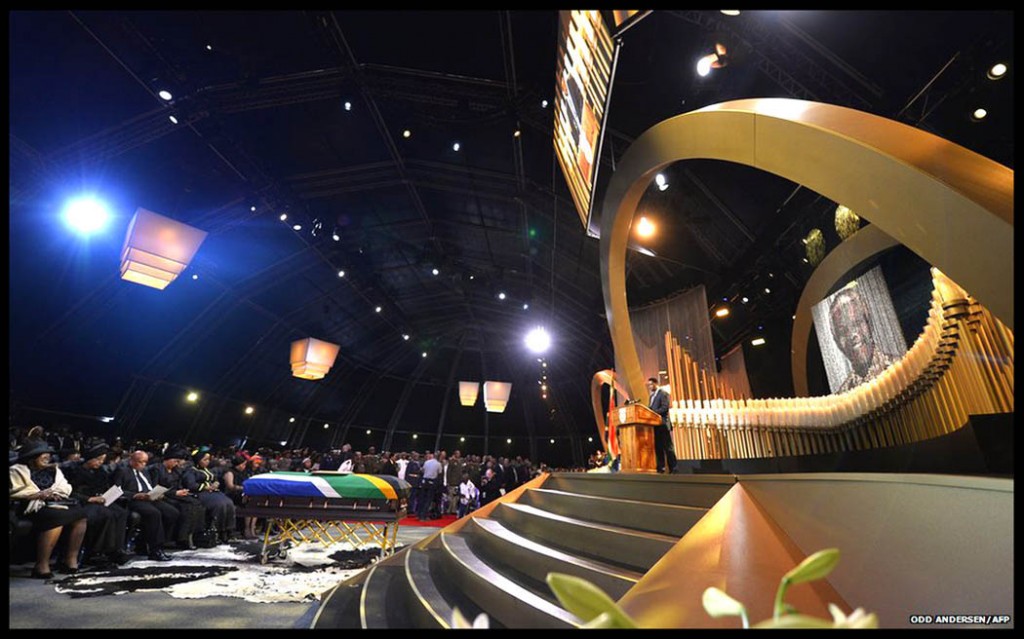 Nelson Mandela spent much of his childhood in the small, Eastern Cape village of Qunu– a place he chose to return to after his release from prison. The ceremony was held in a marquee constructed for the event. 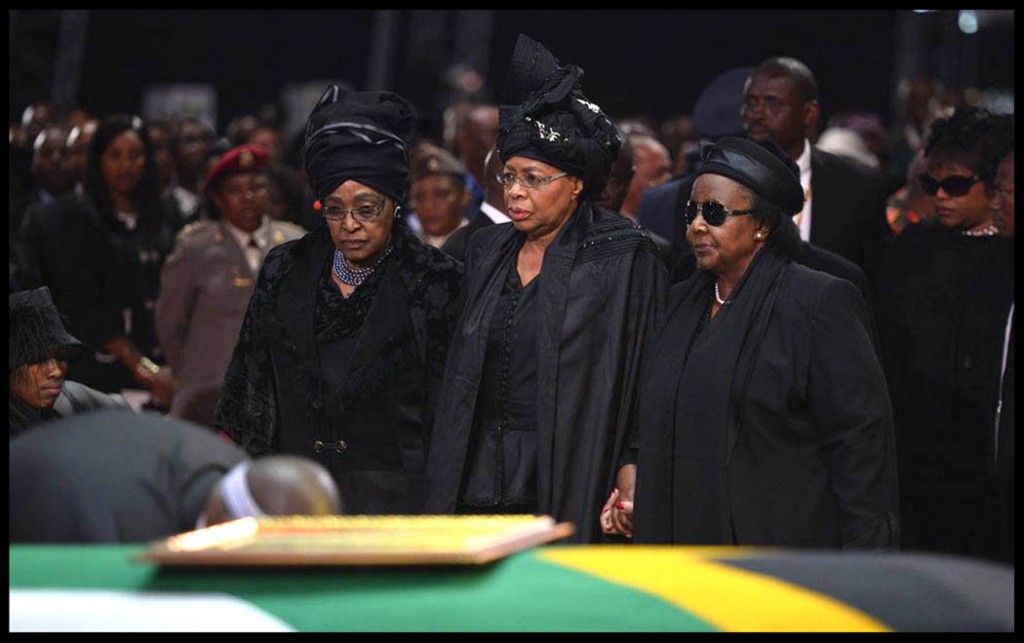 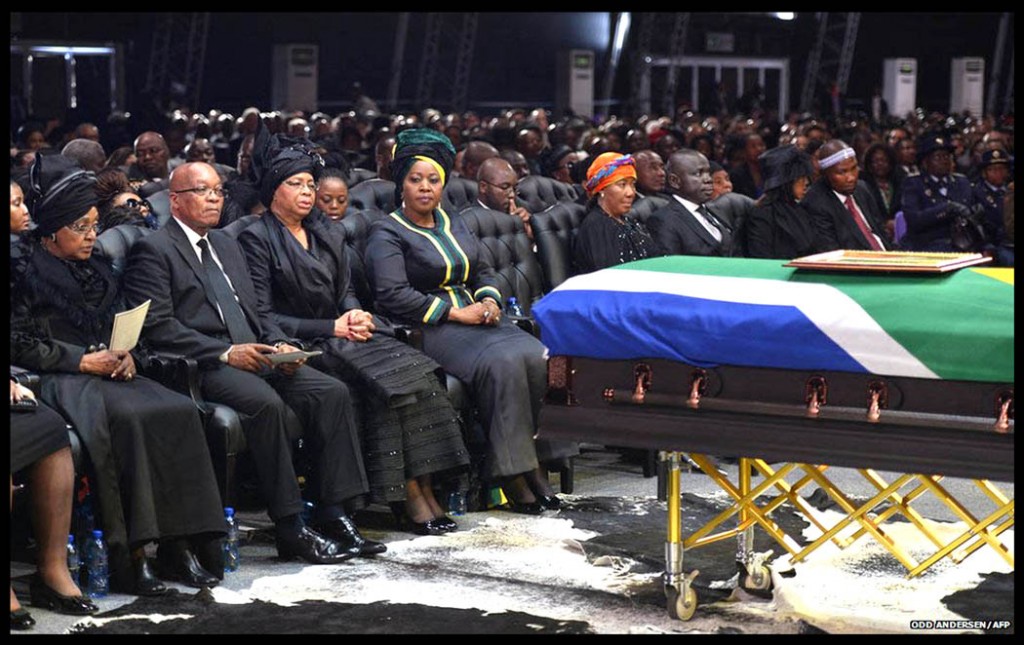 After the two-hour service, Nelson Mandela’s Thembu community will conduct a private traditional Xhosa ceremony – including songs and poems about Mandela’s life and his achievements. 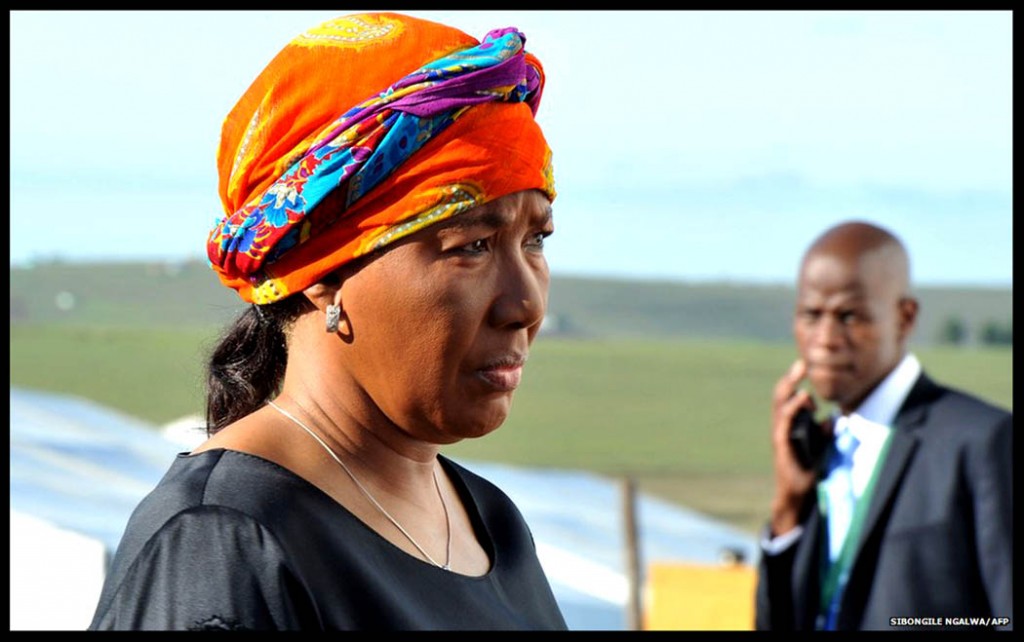 Nelson Mandela’s daughter Makaziwe told the BBC earlier in the week that the former president’s family gathered around him to say goodbye in his final hour.  She is seen here arriving for the funeral in Qunu.

Nelson Mandela’s granddaughter, Nandi speaks to attendees.  She recounted stories and anecdotes of her grandfather’s family life, “He was a true servant of the people, his mission in life was to make lives better.” She says, “He truly cared for his family and children.”    Photograph: Odd Andersen/AFP/Getty images 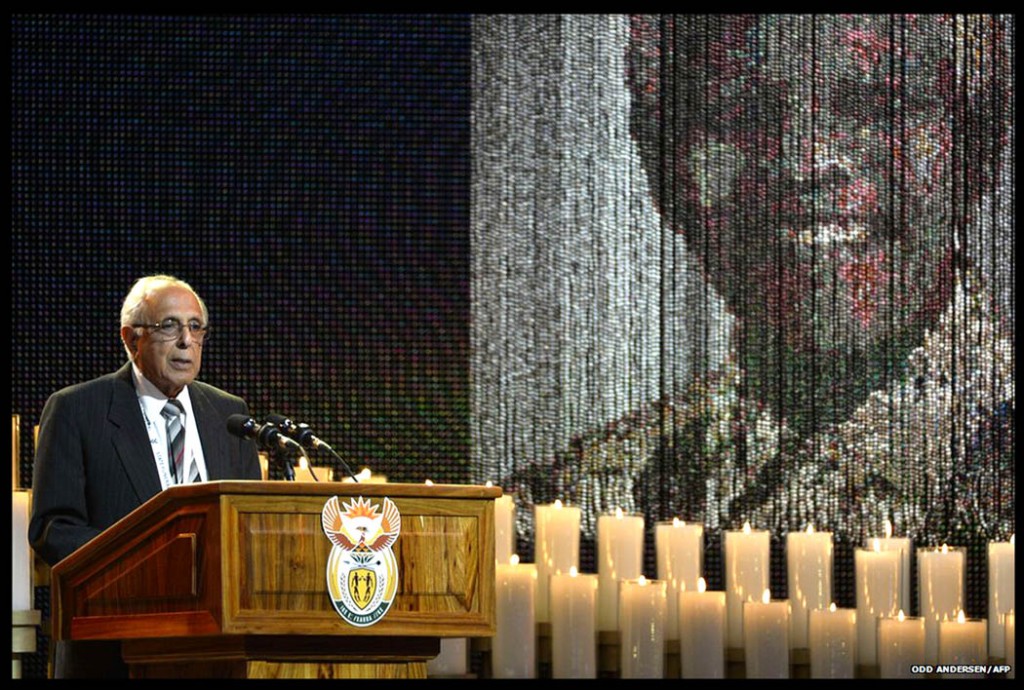 Left-Prince Charles was among the guests that attended the funeral of South Africaf ormer president Nelson Mandela in Qunu on Sunday, December 15, 2013.

Please visit the links below for more pictures and information: