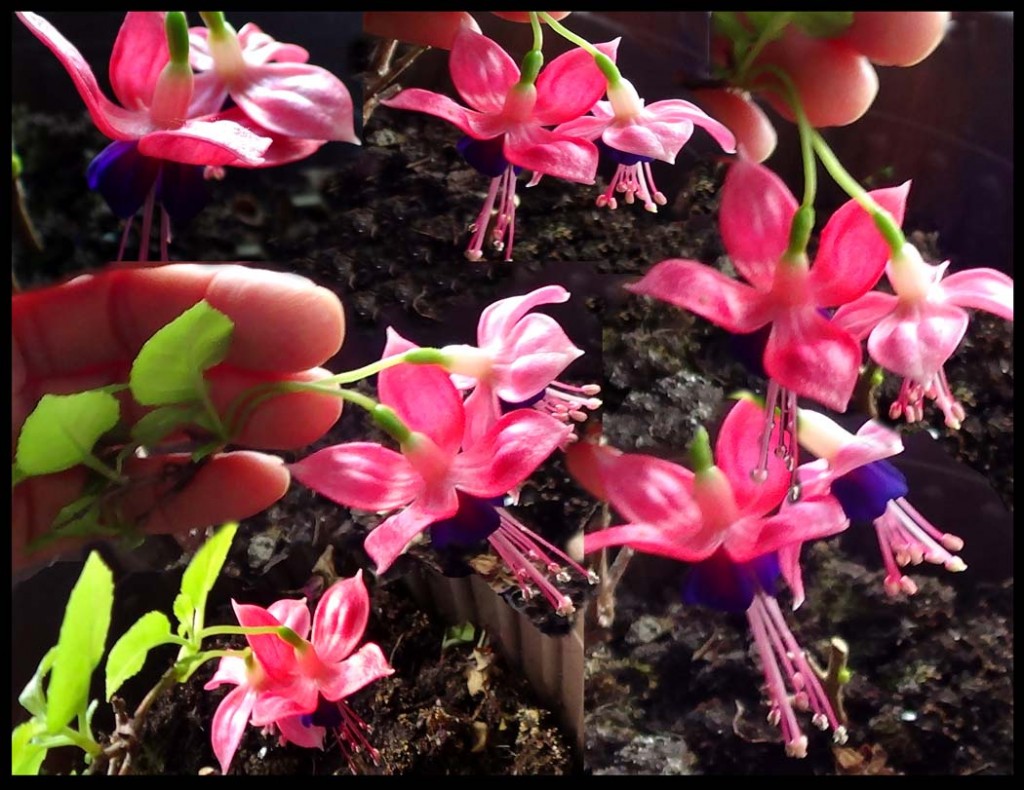 Please do not destroy

And time to go

In my indoor garden

As a cup of hot tea

Now is the time

A moment of happiness

This Project is for John.  He loves Fuchsia Flowers. 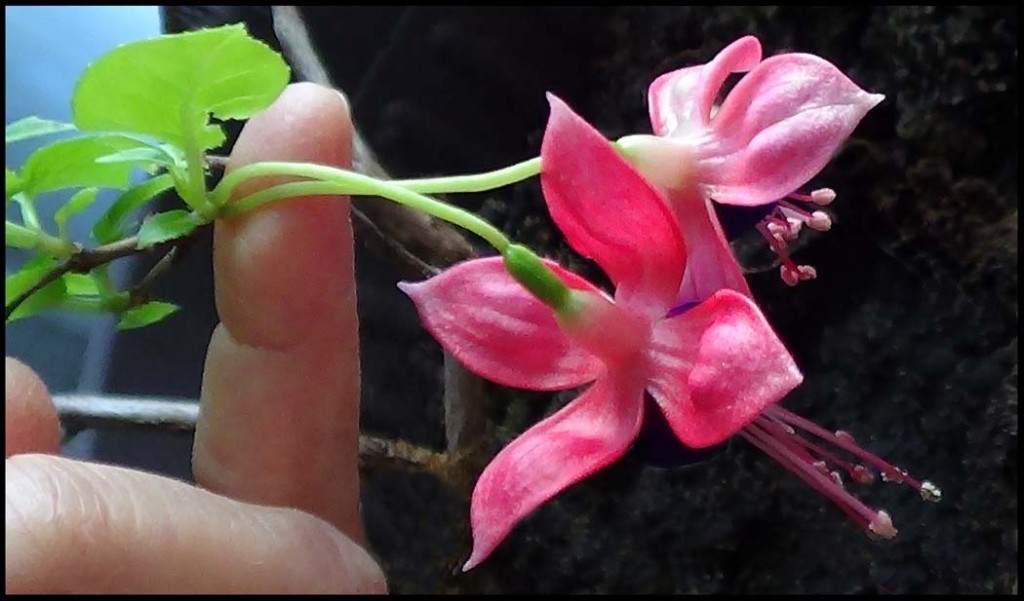 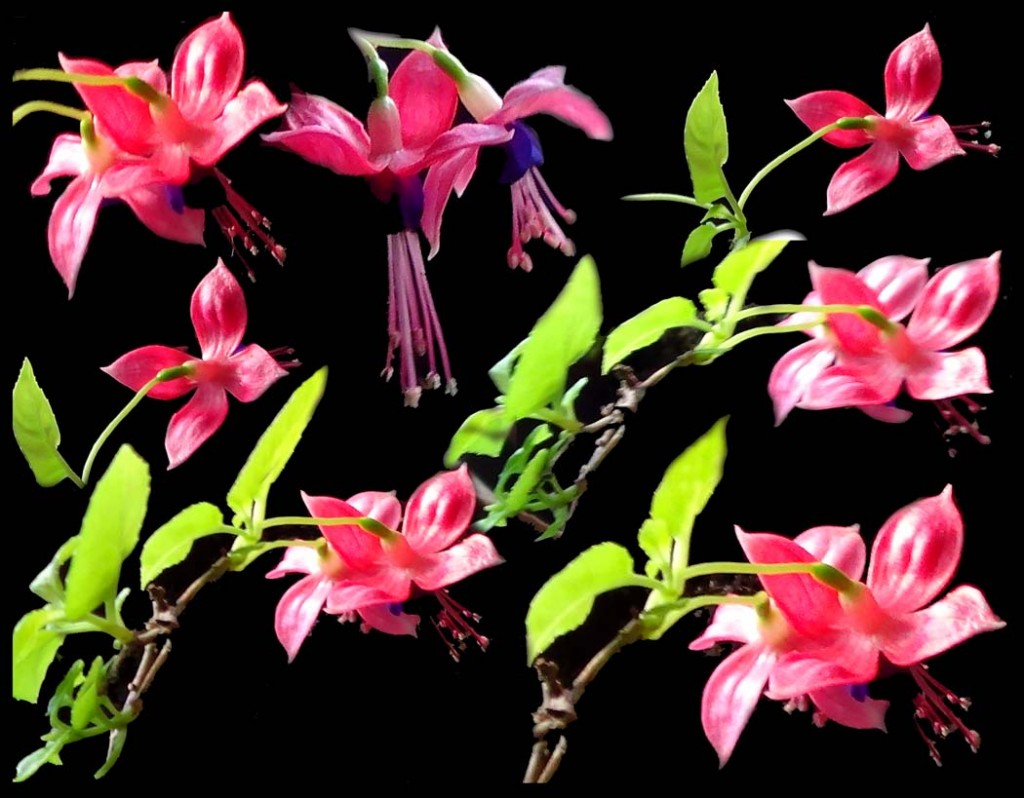 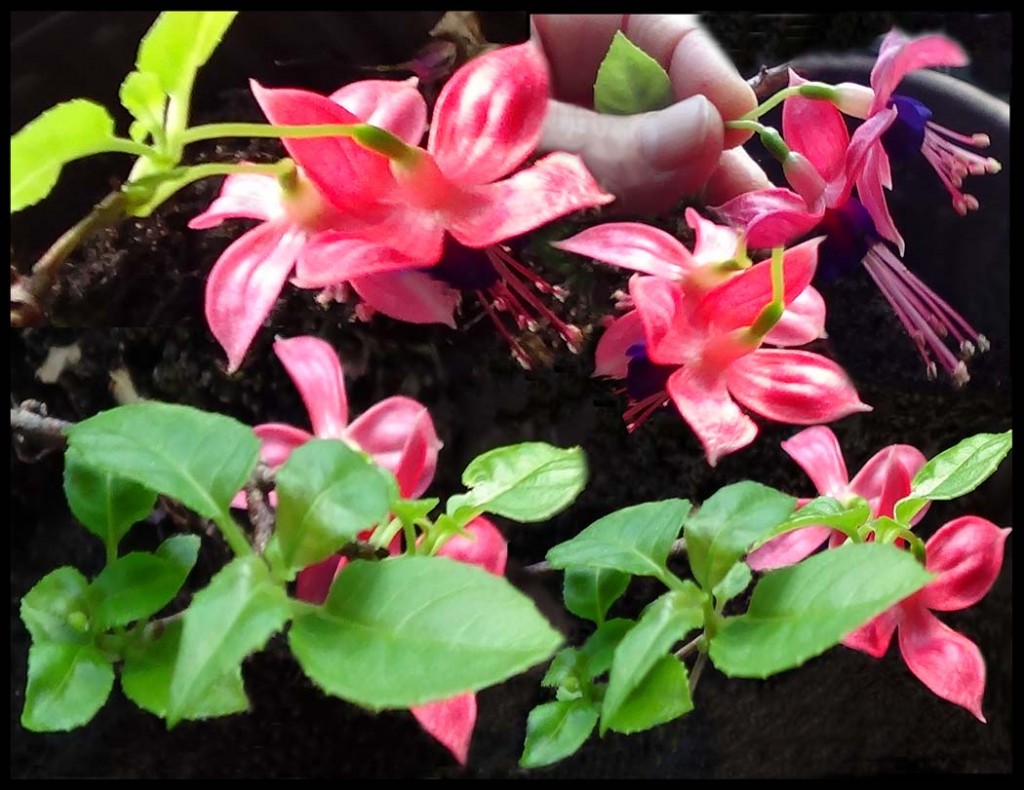 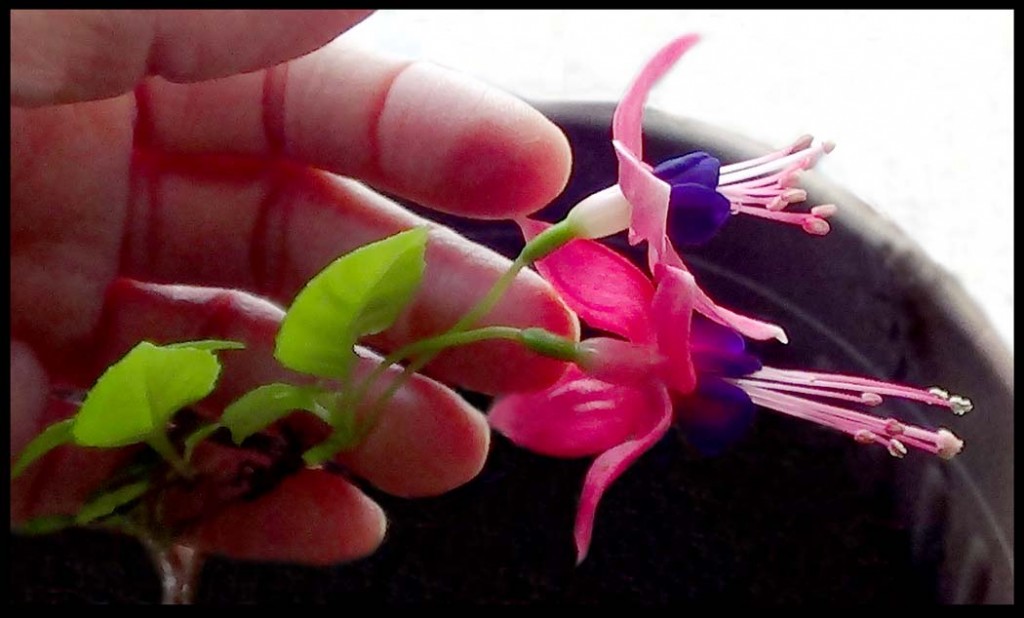 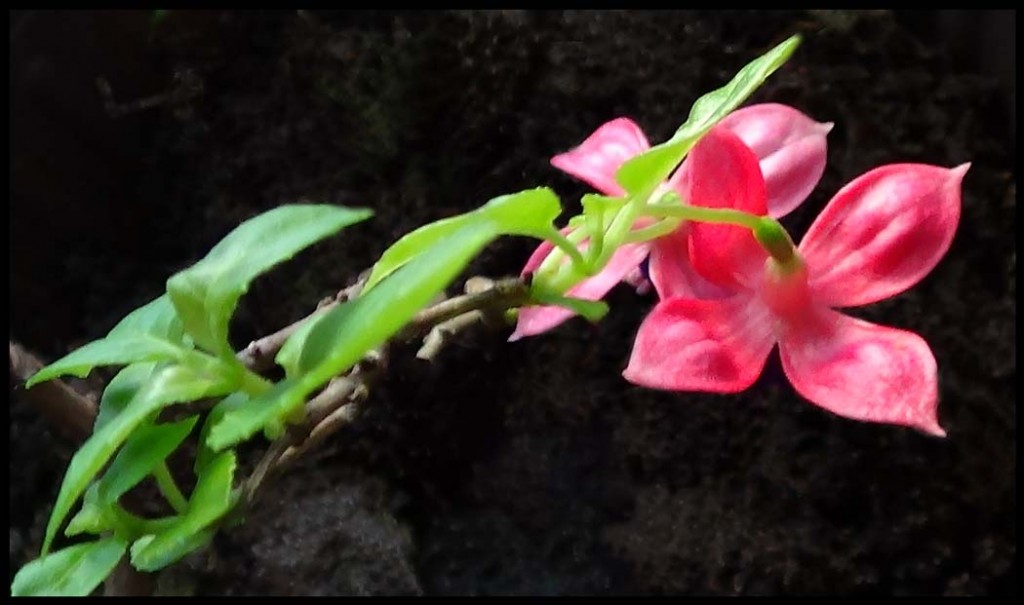 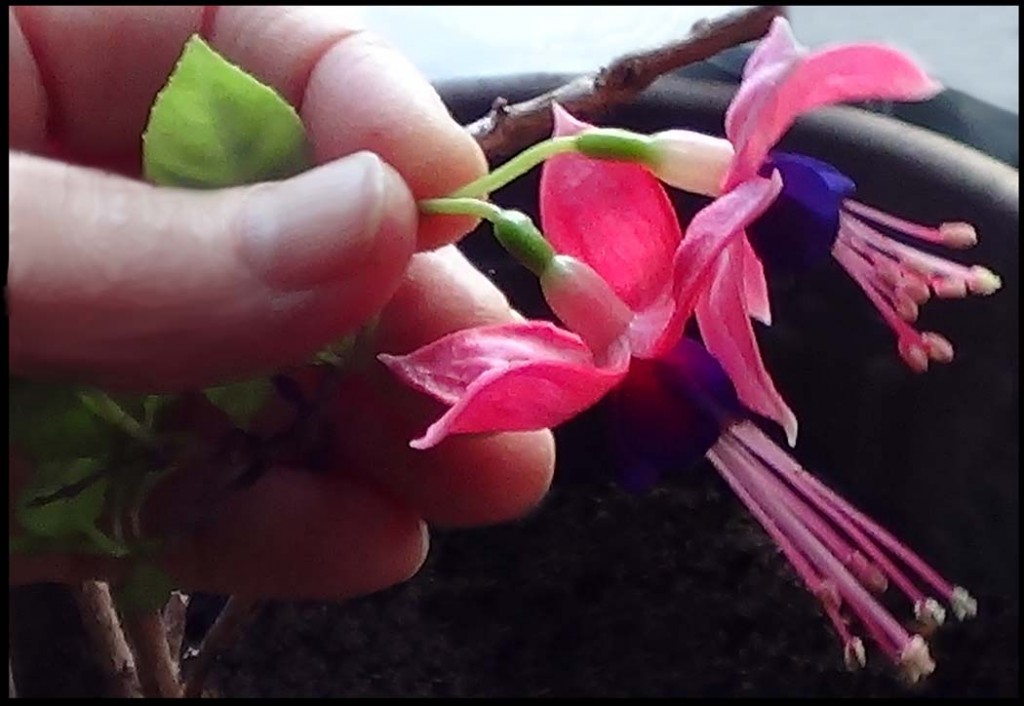 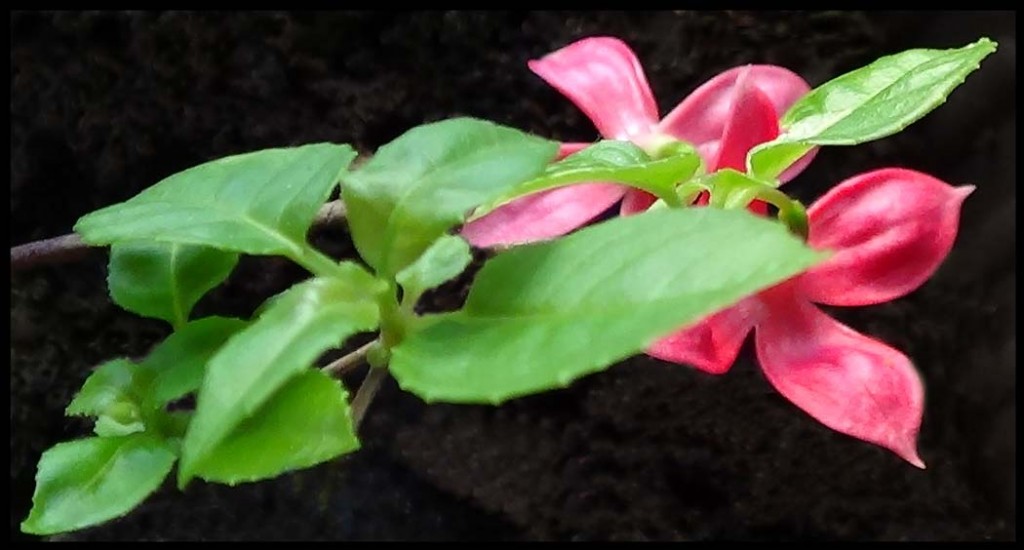 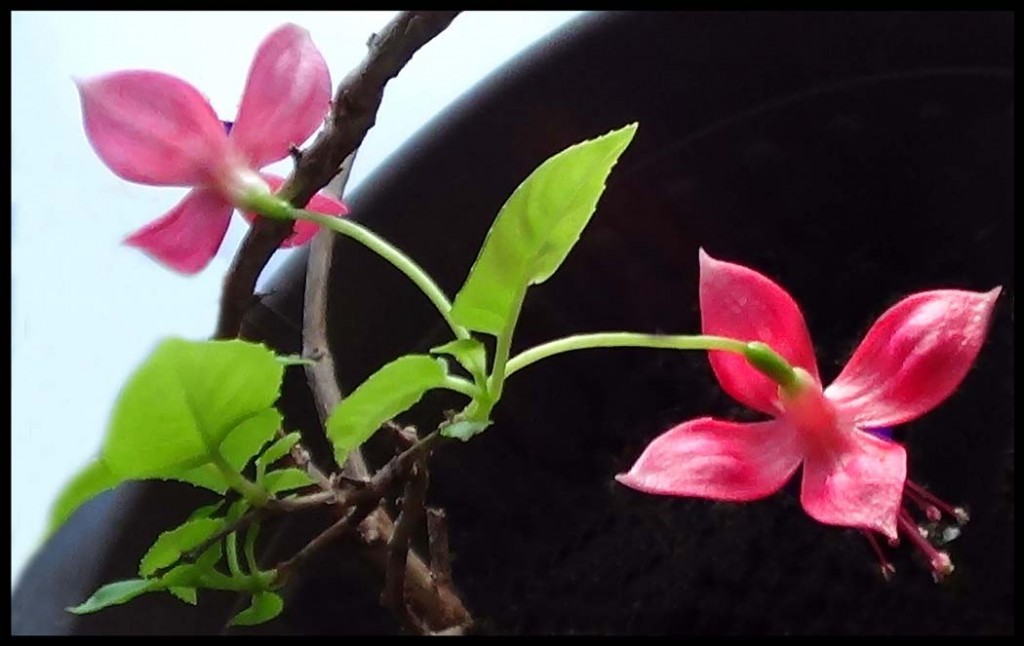 Fuchsia /?fju???/ is a genus of flowering plants that consists mostly of shrubs or small trees. The first, Fuchsia triphylla, was discovered on the Caribbean island of Hispaniola (present day Dominican Republic and Haiti) in about 1696–1697 by the French Minim monk and botanist, Charles Plumier during his third expedition to the Greater Antilles. He named the new genus after the renowned German botanist Leonhart Fuchs (1501–1566).[2][3]

There are currently almost 110 recognized species of Fuchsia. The vast majority are native to South America, but with a few occurring north through Central America to Mexico, and also several from New Zealand to Tahiti. One species, F. magellanica, extends as far as the southern tip of South America, occurring on Tierra del Fuego in the cool temperate zone, but the majority are tropical or subtropical. Most fuchsias are shrubs from 0.2–4 m (8 in–13 ft 1 in) tall, but one New Zealand species, the k?tukutuku (F. excorticata), is unusual in the genus in being a tree, growing up to 12–15 metres (39–49 ft) tall.

Fuchsia leaves are opposite or in whorls of 3–5, simple lanceolate and usually have serrated margins (entire in some species), 1–25 cm long, and can be either deciduous or evergreen, depending on the species. The flowers are very decorative; they have a pendulous “teardrop” shape and are displayed in profusion throughout the summer and autumn, and all year in tropical species. They have four long, slender sepals and four shorter, broader petals; in many species the sepals are bright red and the petals purple (colours that attract the hummingbirds that pollinate them), but the colours can vary from white to dark red, purple-blue, and orange. A few have yellowish tones, and recent hybrids have added the colour white in various combinations. The ovary is inferior and the fruit is a small (5–25 mm) dark reddish green, deep red, or deep purple berry, containing numerous very small seeds.

The fruit of fuchsia species and cultivars is edible, with the berry of F. splendens reportedly among the best-tasting. Its flavor is reminiscent of citrus and pepper, and it can be made into jam. The fruits of some other fuchsias are flavorless or leave a bad aftertaste.[4] 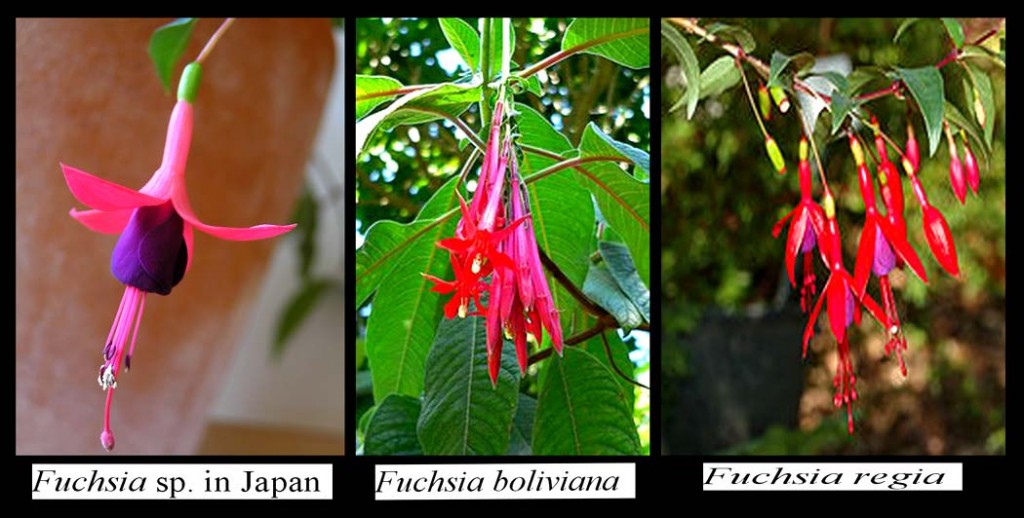 Fuchsias are popular garden shrubs, and once planted can live for years with a minimal amount of care. The British Fuchsia Society[13] maintains a list of “hardy” fuchsias that have been proven to survive a number of winters throughout Britain and to be back in flower each year by July. Enthusiasts report that hundreds and even thousands of hybrids survive and prosper through out Britain. In the United States, the Northwest Fuchsia Society maintains an extensive list of fuchsias that have proven hardy in members’ gardens in the Pacific Northwest over at least three winters.[14]

Fuchsias from sections Quelusia (F. magellanica, F. regia), Encliandra, Skinnera (F. excorticata, F. perscandens) and Procumbentes (F. procumbens) have especially proven to be hardy in widespread areas of Britain and Ireland, as well as in many other countries such as New Zealand (aside from its native species) or the Pacific Northwest region of the United States. A number of species will easily survive outdoors in agreeable mild temperate areas. Though some may not always flower in the average British summer, they will often perform well in other favorable climatic zones. Even in somewhat colder regions, a number of the hardier species will often survive as herbaceous perennials, dying back and reshooting from below ground in the spring.

Due to the favorably mild, temperate climate created by the North Atlantic Current, fuchsias grow abundantly in the West Cork region of Ireland and in the Scilly Isles, and have even colonised wild areas there. While F. magellanica is not widespread in Scotland it has been known to grow wild in sheltered areas, such as the banks of local streams in Fife.[15] In the Pacific Northwest region of the United States, F. magellanica also easily survives regional winters. 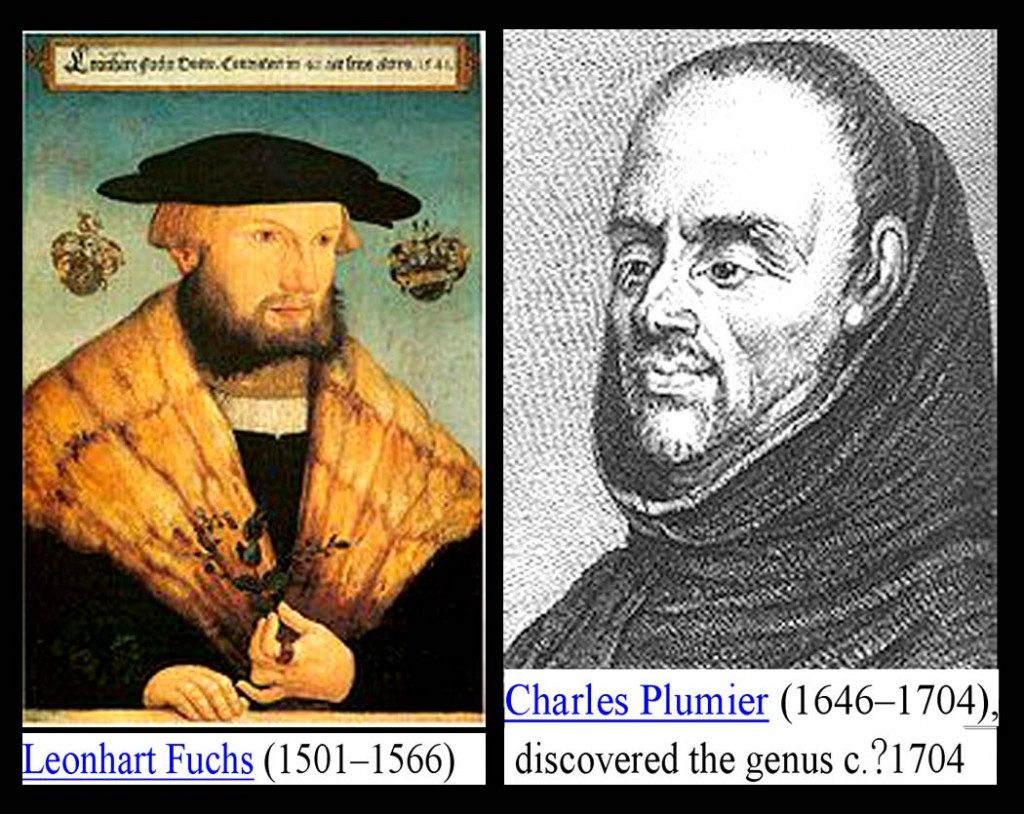 The fuchsia was introduced to England in the 18th century by Plumier who took some seeds there after his expedition. The species he took was Fuchsia triphylla flore coccinea where specimens appeared in France. There is a reference to a fuchsia under the name of “Thiles” in the Journal des Observations Botaniques in 1725. Thiles seems to be the French version of the Spanish, Thilco or Tilco. However, Thilco, or more properly Chilco, is derived from the name by which the indigenous Mapuche people of Southern Chile and Southwestern Argentina referred to their native Fuchsia magellanica. In the Mapuche language, Chilco means “that which grows near the water” and this is a reference to its being found growing abundantly in moist but well-drained areas along streams and lakes. In Chile today, F. magellanica is still called Chilco.[28]

Professor Philip Munz, in his A Revision of the Genus Fuchsia, 1793 says, however, that the fuchsia was first introduced into England by a sailor who grew it in a window where it was observed by a nurseryman from Hammersmith, a Mr. Lee, who succeeded in buying it and propagating it for the trade. This was one of the short tubed species such as magellanica or coccinea.

Leonhart Fuchs was born in 1501. He occupied the chair of Medicine at the Tübingen University from the age of 34 until his death, on 10 May 1566. Besides his medical knowledge, according to his record of activities which was extensive for the time, he studied plants. This was natural, as most of the remedies of the time were herbal and the two subjects were often inseparable.

In the course of his career Fuchs wrote De Historia Stirpium Commentarii Insignes, which was published in 1542. In honour of Fuchs’ work the fuchsia received its name shortly before 1703 by Charles Plumier. It was Plumier who compiled his Nova Plantarum Americanum, which was published in Paris in 1703, based on the results of his plant-finding trip to America in search of new genera.

Please visit Wikipedia for more information, the link is: https://en.wikipedia.org/wiki/Fuchsia

Fuchsias, or Ladies’ Eardrops, as they have often been called, were first introduced into Great Britain from Chile about 1788.

At the height of their early popularity less than a hundred years later, there were 541 known species and varieties; today we have between 3,000 to 5,000 species and cultivars.

In fuchsias, one can have many color combinations in either single or double form. Don’t start with large, well-established plants if you want them to adjust to your indoor conditions and be amenable to training.

Get small ones no more than five joints tall, and begin at once the business of shaping the plants into the form you prefer.

When the plants are finally established in the pot size you want them to flower in, use a liquid plant food in place of every third watering, fuchsias are heavy feeders, and soon spindle out unattractively unless kept well fed.

To keep your old plants through the winter, place them in a very cold but frost-free spot, and from October through December give them only enough water to keep the wood from shriveling.

Then in January move them to a minimum temperature of 50 degrees, and give more water. As soon as all the live “eyes” can be located, trim the plants to shape and remove all dead wood.

Next step – turn them out of the pots, wash all the soil from the roots, and repot in the same size pot using fresh soil.

Increase the amount of water given as the plants require it, pinch two or three times before the end of May, and either shift to larger pots when necessary or begin supplemental feeding when roots have filled the soil.

Plants may also be started from seed in January or February, if you have facilities for seed-starting.

If you prefer to start from cuttings, you can take soft green wood ones in February or March or take them in August from plants which have summered outdoors.

The best cuttings are from suckers which start up from the base of the plants, and should be about three inches long.

Add more sand to the potting soil to start them in, give them shade, a temperature no less than 60 degrees, and spray them lightly if they show signs of wilting.

After they are well rooted, handle them as you would newly purchased small plants.

First, of course, fuchsias need coolness above all else. They prefer that temperatures never go over 65 but they can stand higher ones providing the humidity is high, too.

When you are planning to grow fuchsia flowers, you need to pay attention at some aspects. The first aspect is the sunlight. If you are planting the flower with too much sun, it will grow smaller and have fewer flowers. You need to plant the flower in partial sun since it will produce a heavy layer of mulch and keep the roots cool. For people who plant their flower in container, you need to use a clay or wood pot. Avoid using plastic pot since it can heat faster than other materials. As another option, you can also place other heat tolerant plants around the container plants to give protection the fuchsia’s pot from direct sunlight.

Another important aspect in growing fuchsia flowers is soil. Fuchsia will grow better in well-drained soil which is rich with organic matter. Make sure you amend the soil with compost before planting. The compost has the function to increase drainage and the composition of the soil. In planting the flowers, you need to plant those flowers 4 to 6 inches deep.

You also need to consider the moisture. It is important for you to water the fuchsia flowers frequently. People are recommended to water the flower in the morning to avoid getting the leaves wet in the warmth of the sun. The flowers grow better in moist soil but not wet soil. Fuchsia flowers which are planted in clay and wood will get dry out faster than plastic containers since clay and wood are more porous. People have to check their flowers for some times during hot summer months. It needs to be done to prevent the roots from drying out.