Elephants at the Water Lily Pond

As the sun turns towards the horizon

A herd of elephants are marching

To their favorite place

Their stomachs are more than half full

Their legs are tired

And the skins are baked

From the afternoon sun

Helping to quench their thirst

Spraying water on their heated skins

Especially fun for young ones 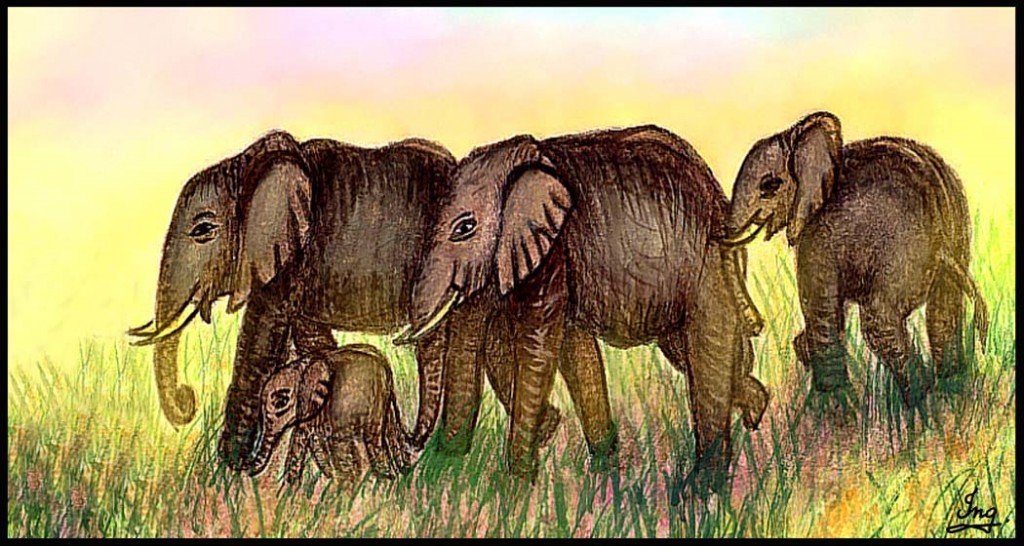 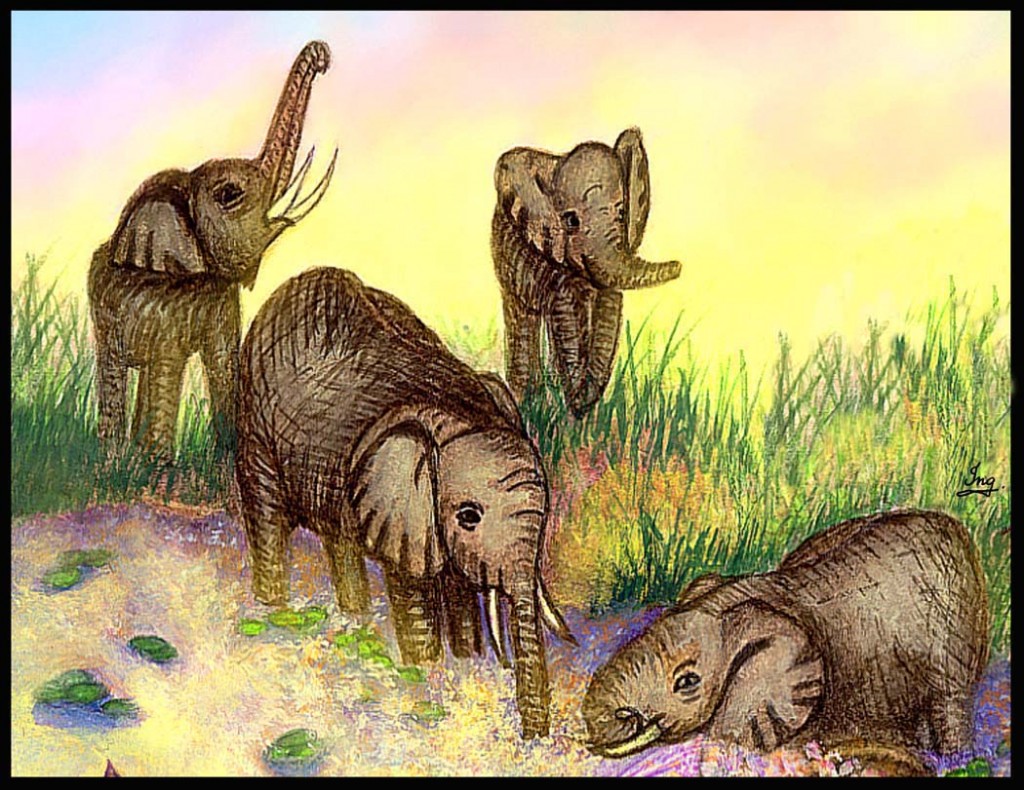 As the golden rays of sun reflect on the water

It turns the pond and the elephants gold

Accenting the beauty of nature

When nature is in harmony

With all other livings creatures of the world

Humans can make peace with themselves

Only humans are capable of

Making the world better or worse

No other creatures can

Are we ready to make it better? 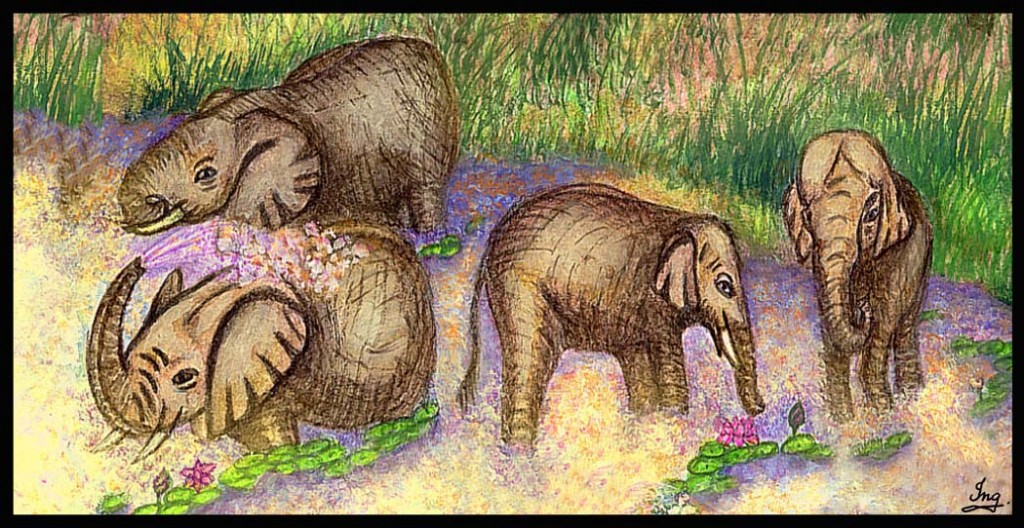 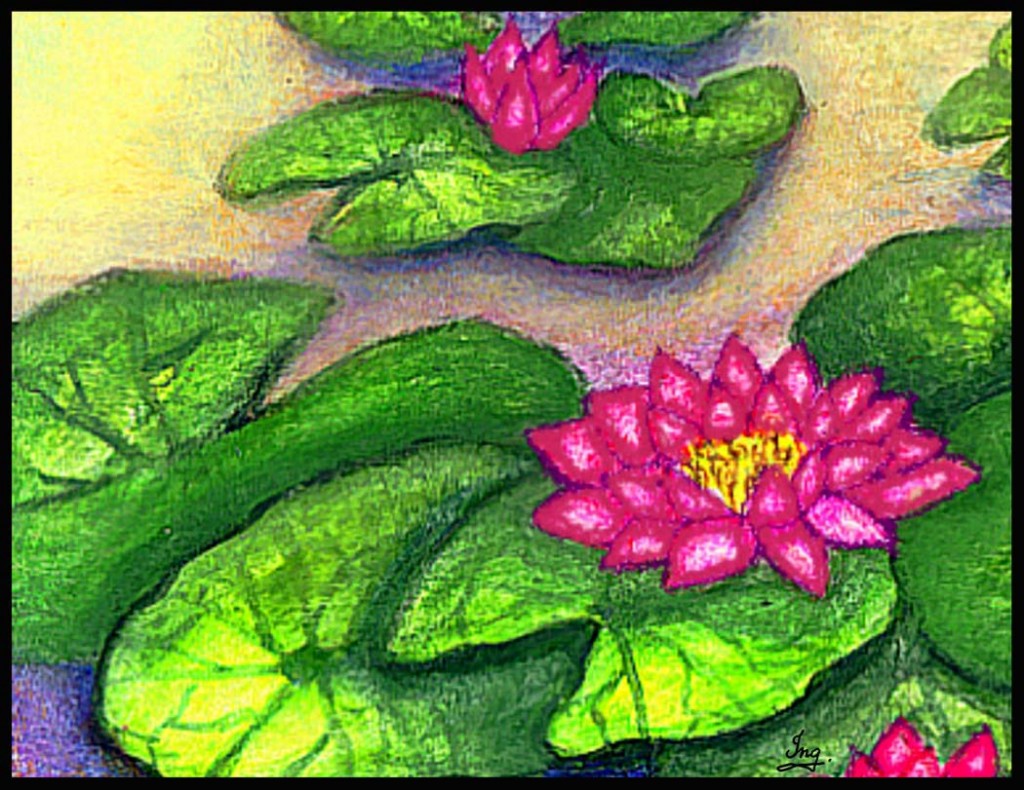 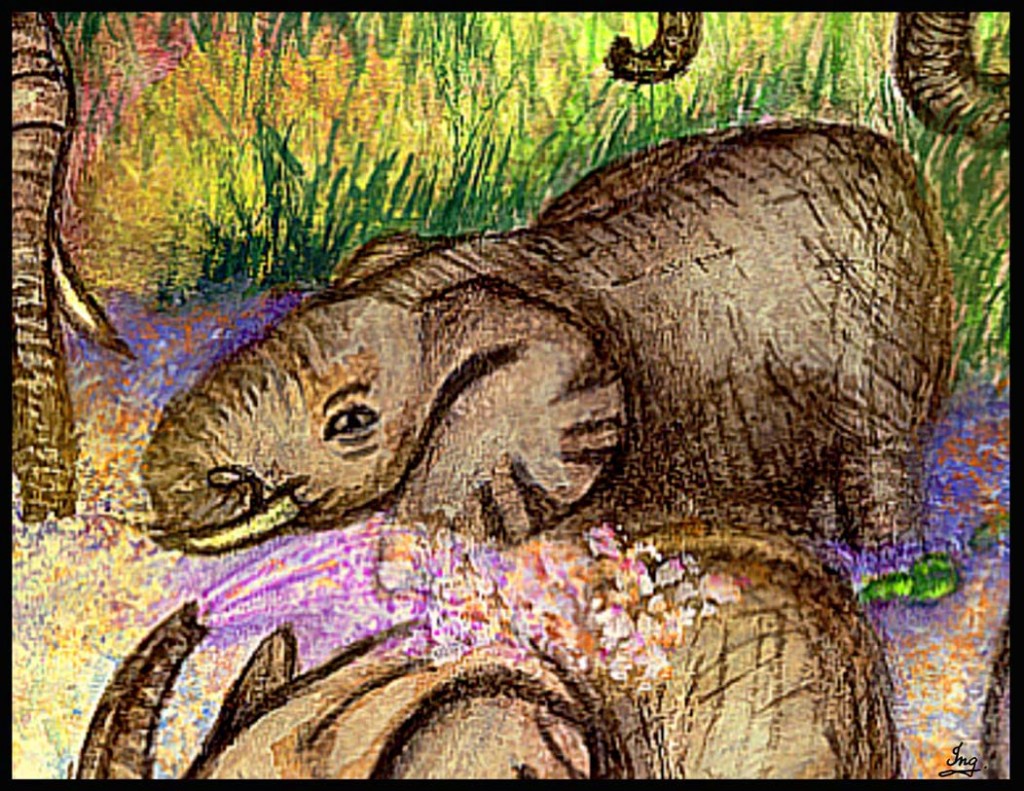 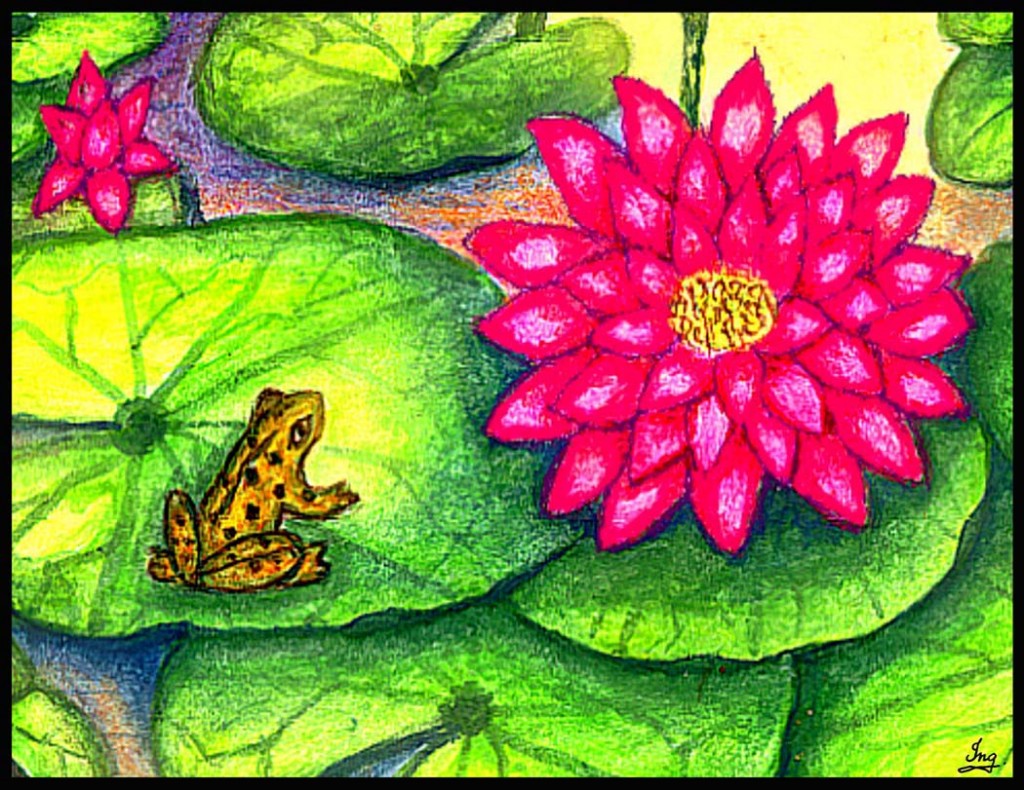 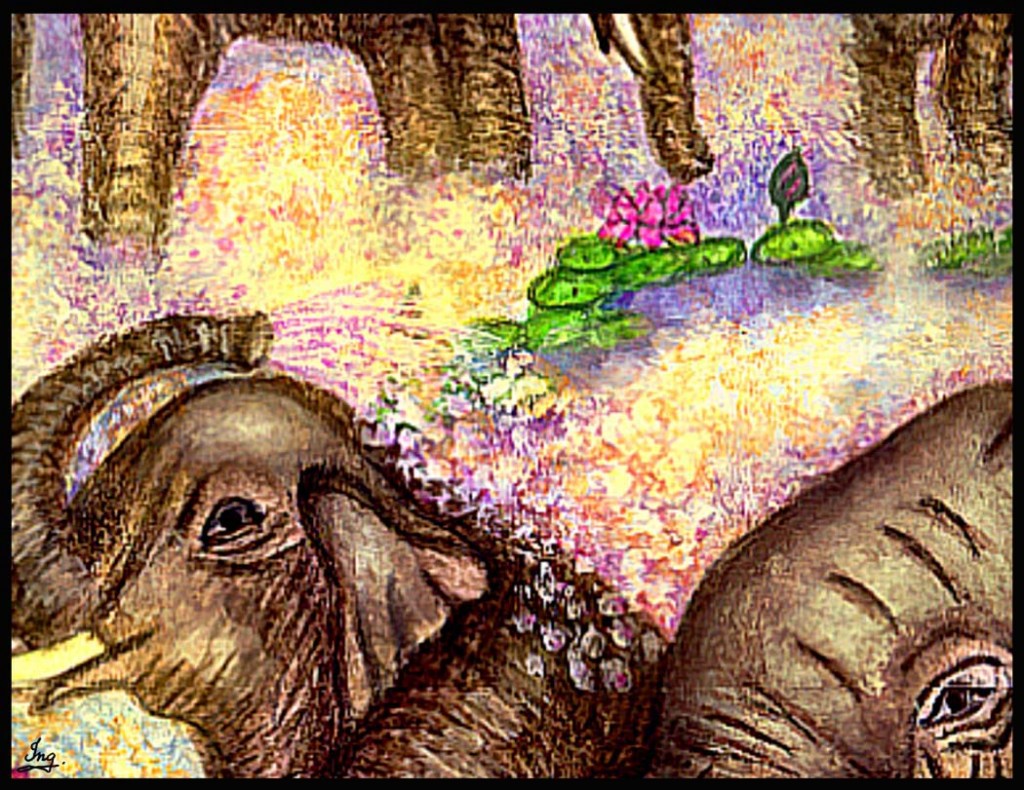 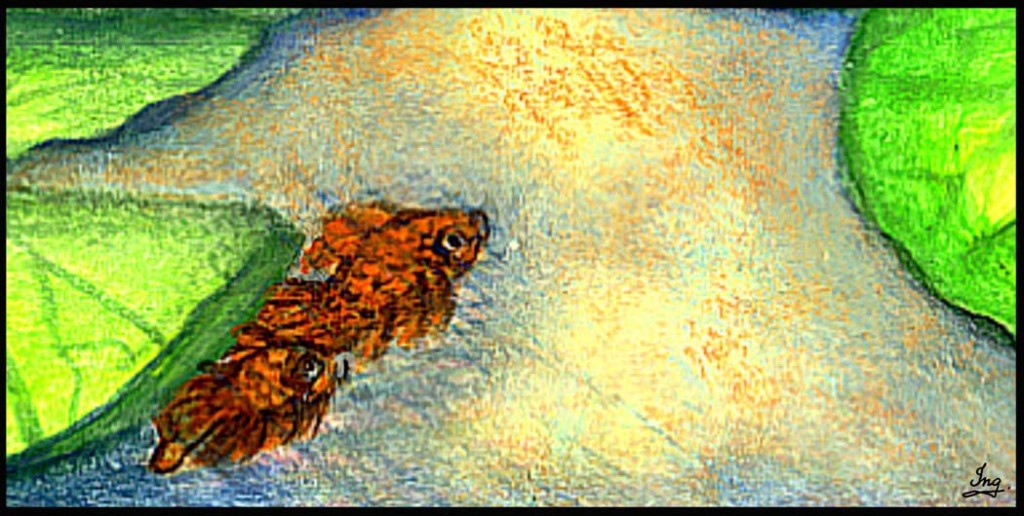 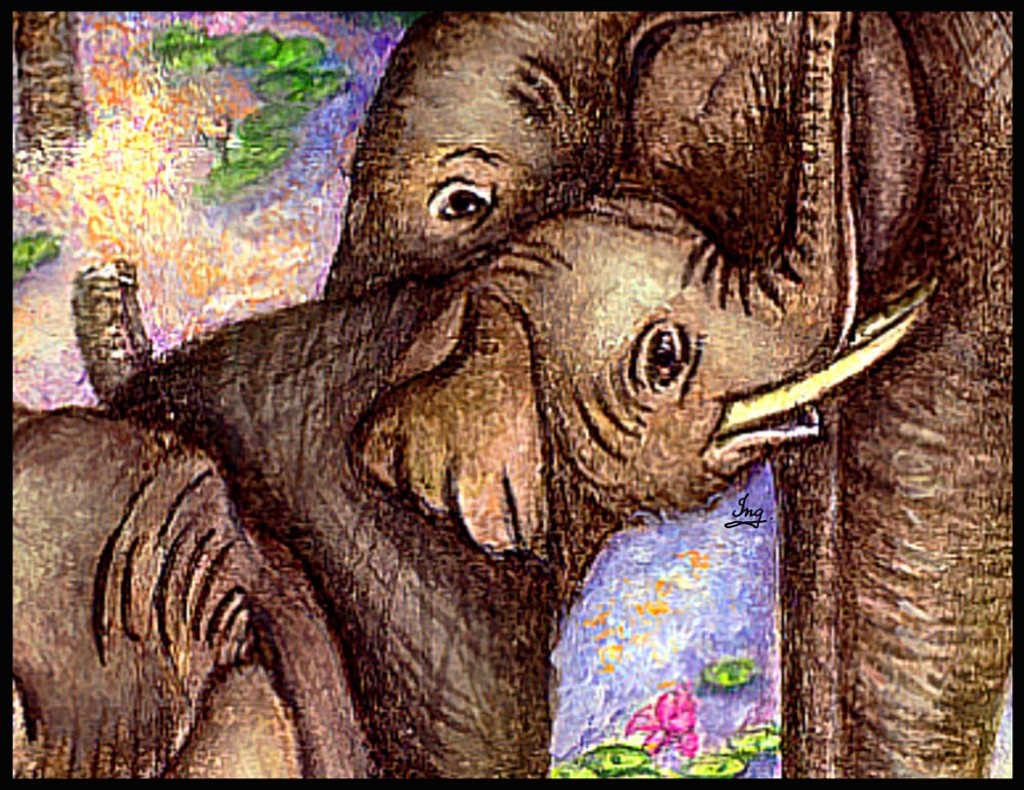 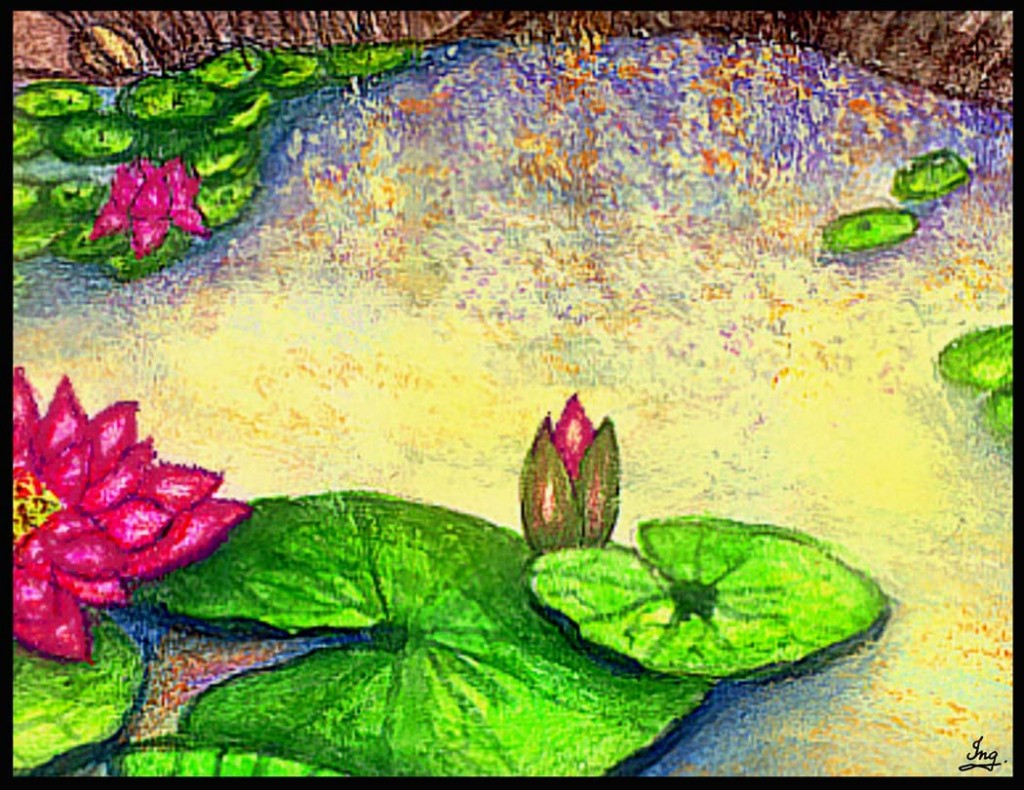 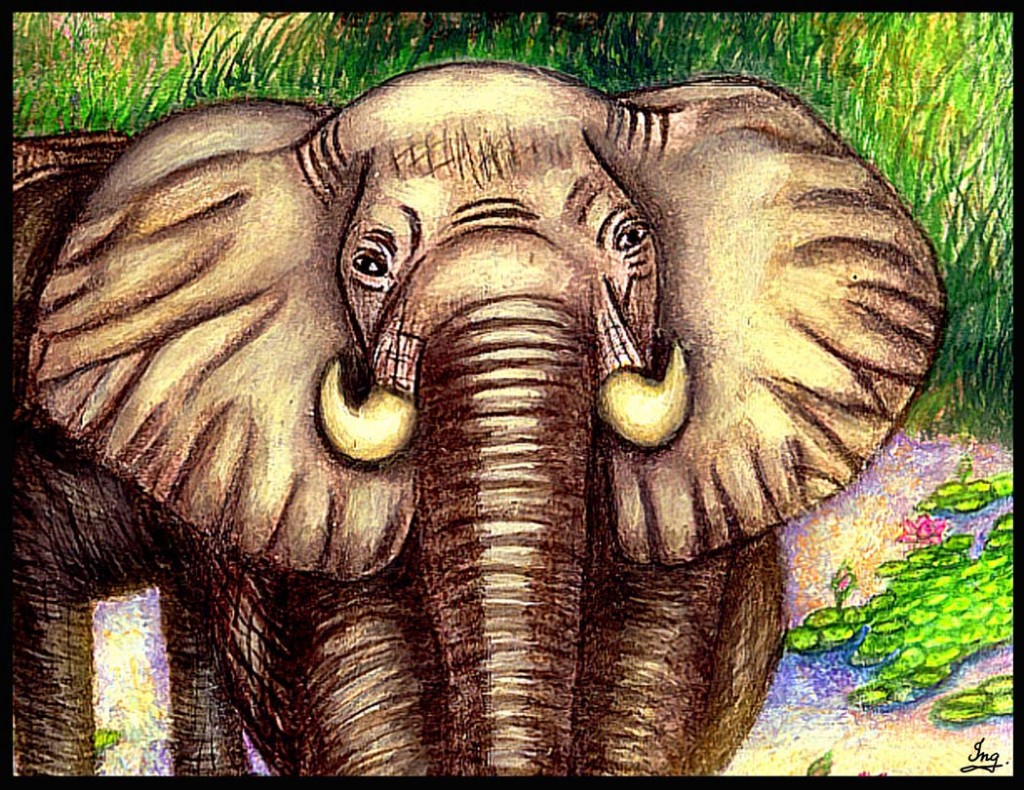 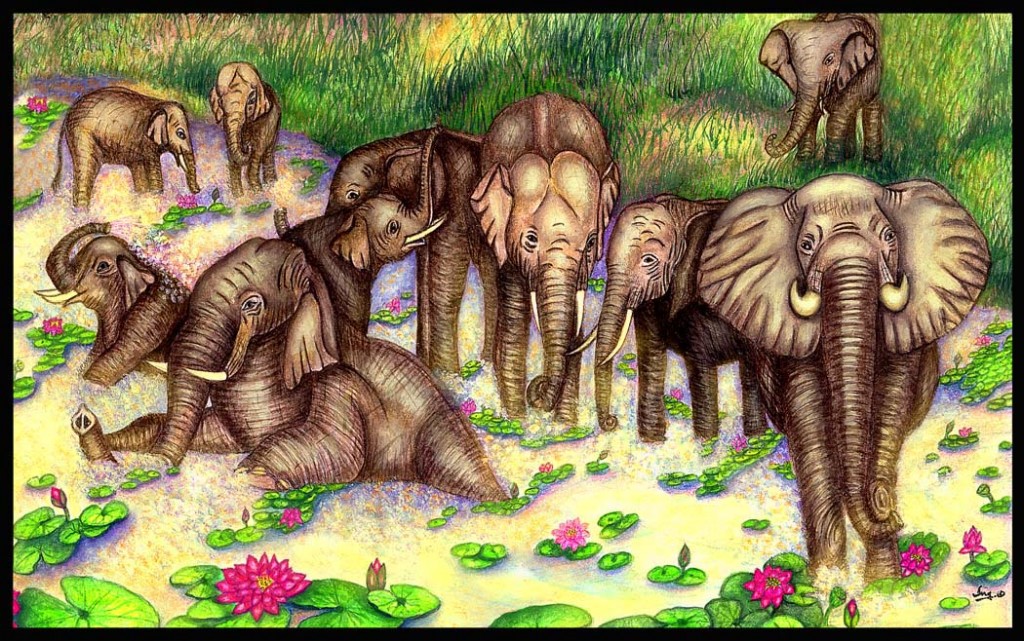 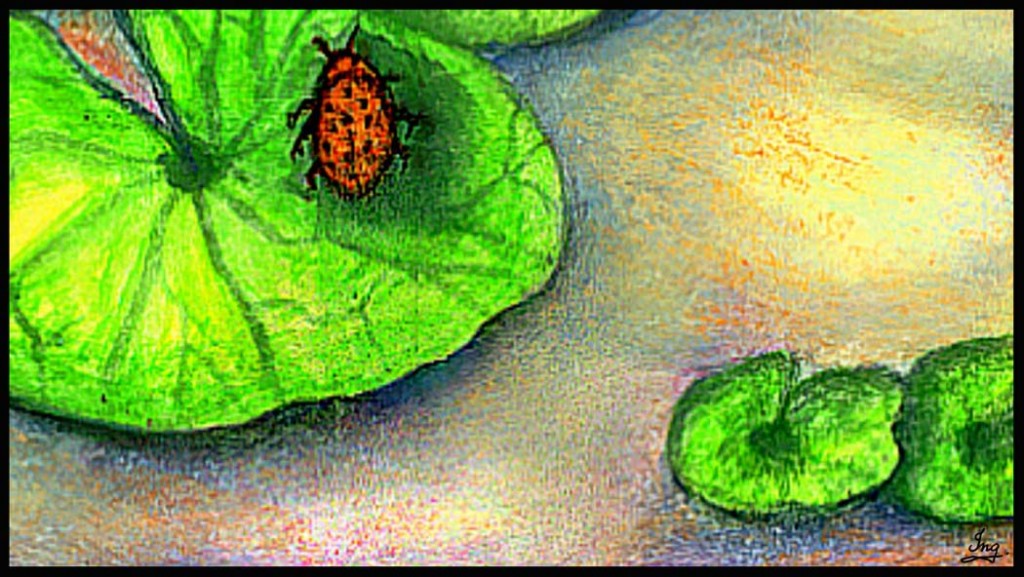 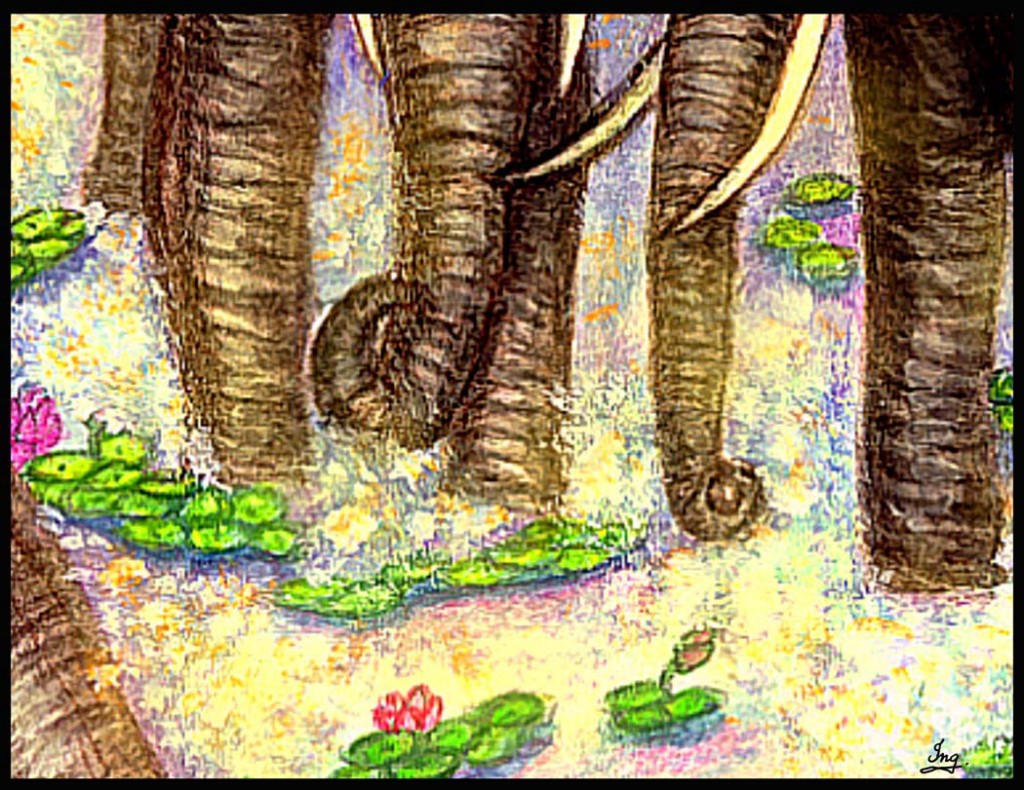 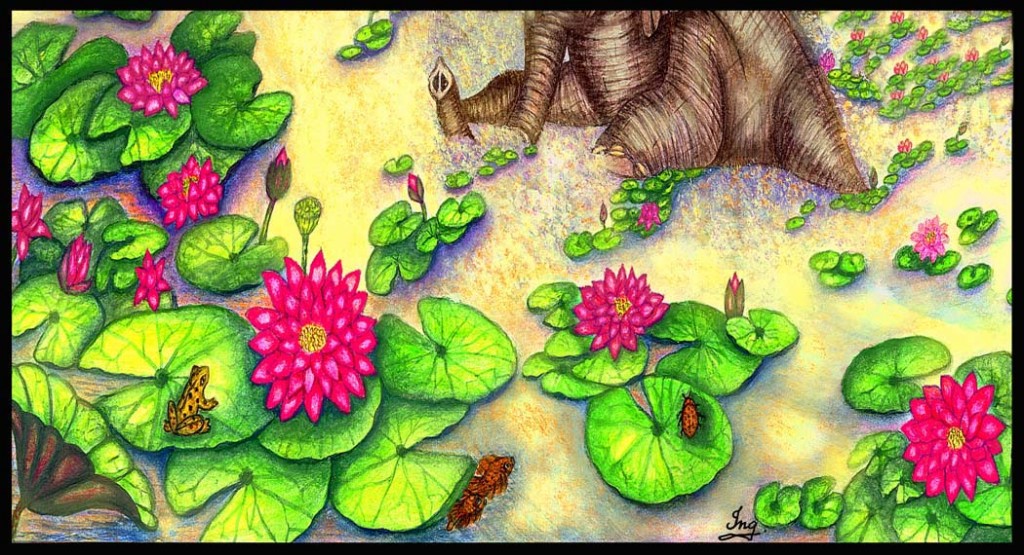 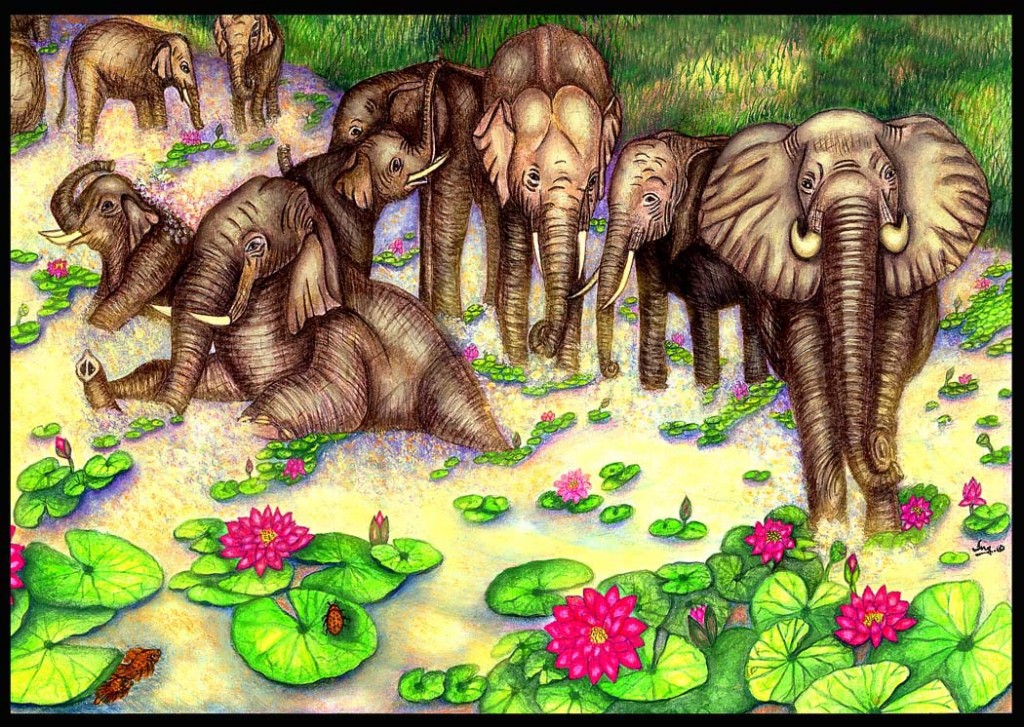 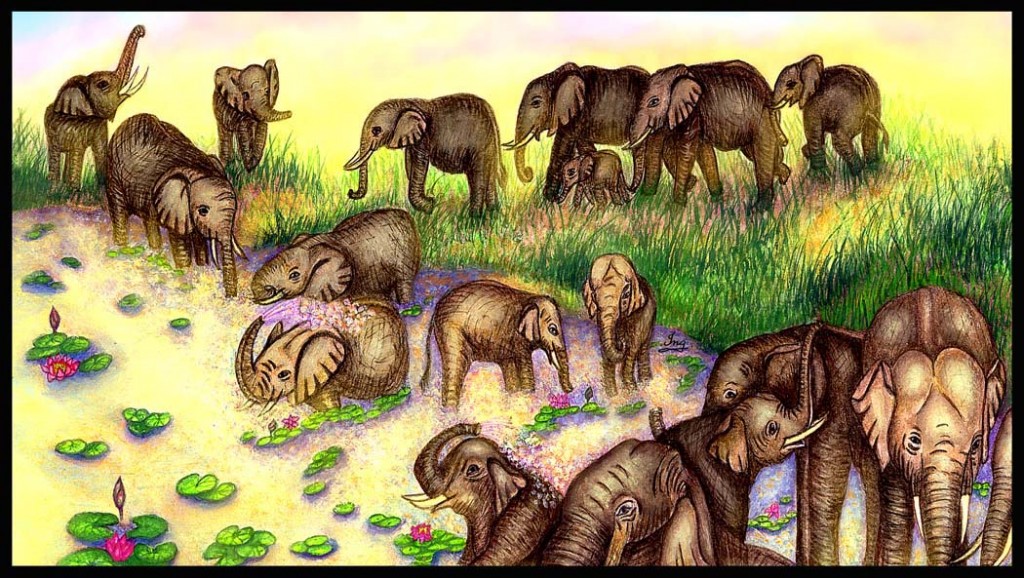 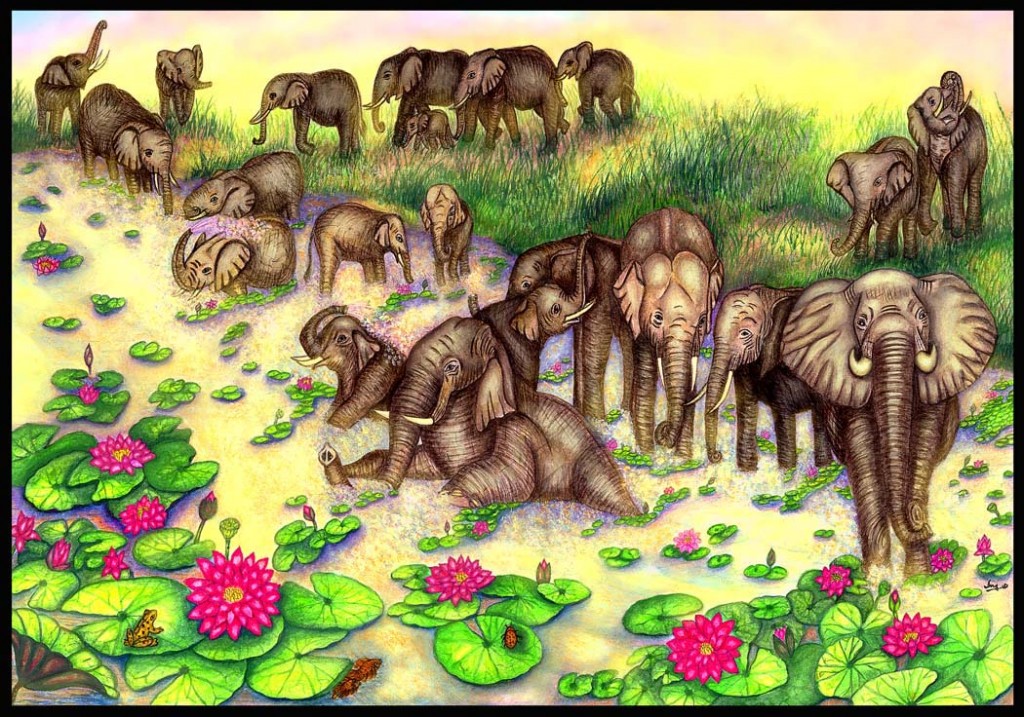 I produced Elephants at the Water Lily Pond in 1999, because I heard about deforestation.  I have been very concerned about humans invading the animals’ habitats by cutting down the forests for housing and farm land.  Some humans do not believe in global warming that is caused from mismanaging the environment so they go on making their wealth from destroying the land for mining and the forest for the wood products.  Some trees are cut down to produce throw away chopsticks and other wasteful products.

Please read the following article from National Geographic about the plight of elephants:

Two of the rare mammals died in the process, group says. 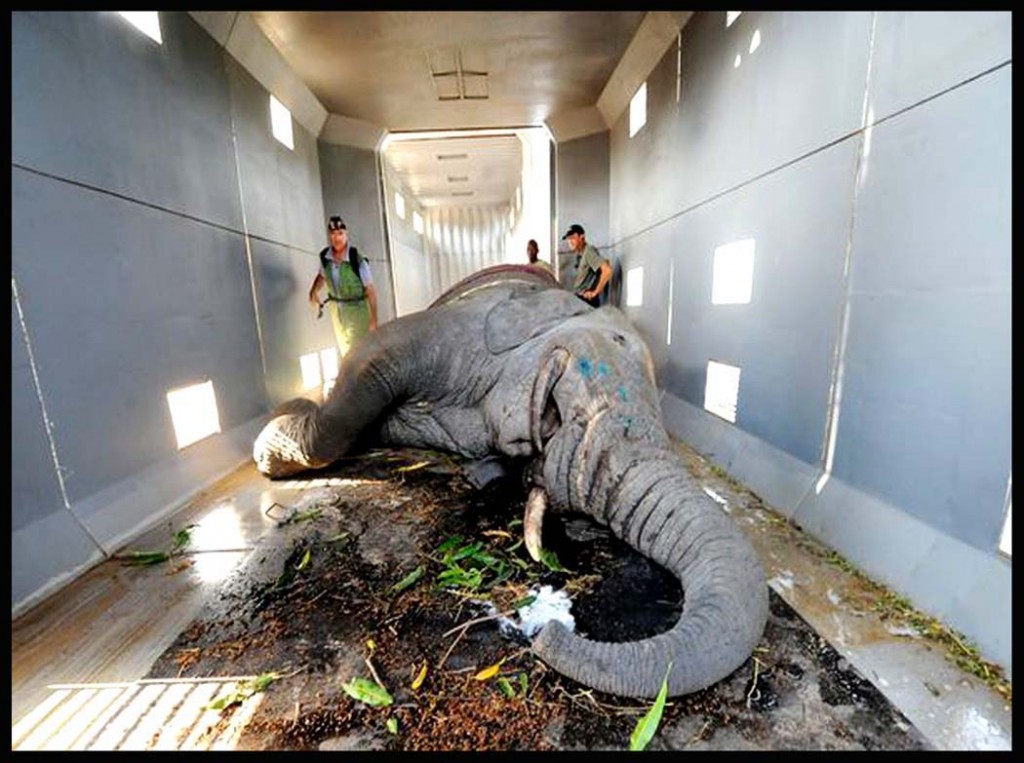 An elephant wakes after being tranquilized outside of Daloa,Ivory Coast.

The challenging relocation was conducted to relieve growing conflict between the large animals and villagers in Daloa, a town near the elephants’ home in Marahoue National Park.

Four of the elephants made it, two of the rare mammals died—a loss that’s high but “not surprising” for this type of risky operation, said Joyce Poole, co-founder of the conservation group ElephantVoices. (Related: “Success and Tragedy: IFAW’s Project to Relocate Elephants in Cote d’Ivoire.”) 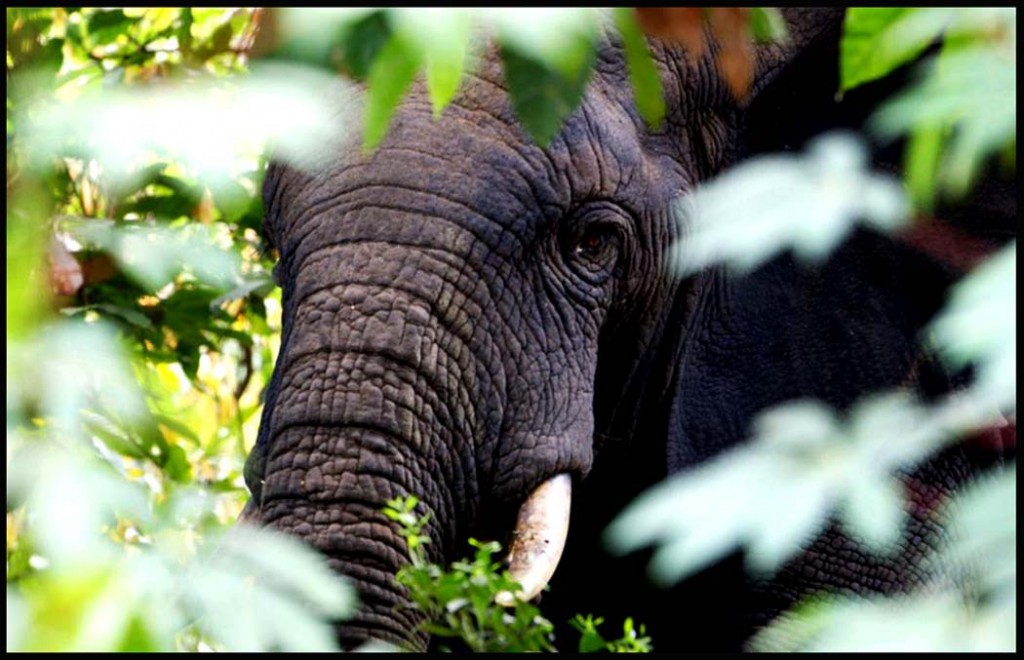 An African forest elephant hides in the forests outside of Daloa.

One of the rarest subspecies on the continent, there are an estimated 60,000 to 150,000 African forest elephants left in the wild, according to Cornell University. The International Union for Conservation of Nature lists the species as vulnerable.

“Translocating elephants [as a] solution is only used as last resort—the operation is risky and very expensive,” said Céline Sissler-Bienvenu, a director at the IFAW.

“Instead of killing these elephants, which are the country’s national emblem, they wanted to find a humane solution, and knew we had moved elephants in Malawi before,” said Sissler-Bienvenu. 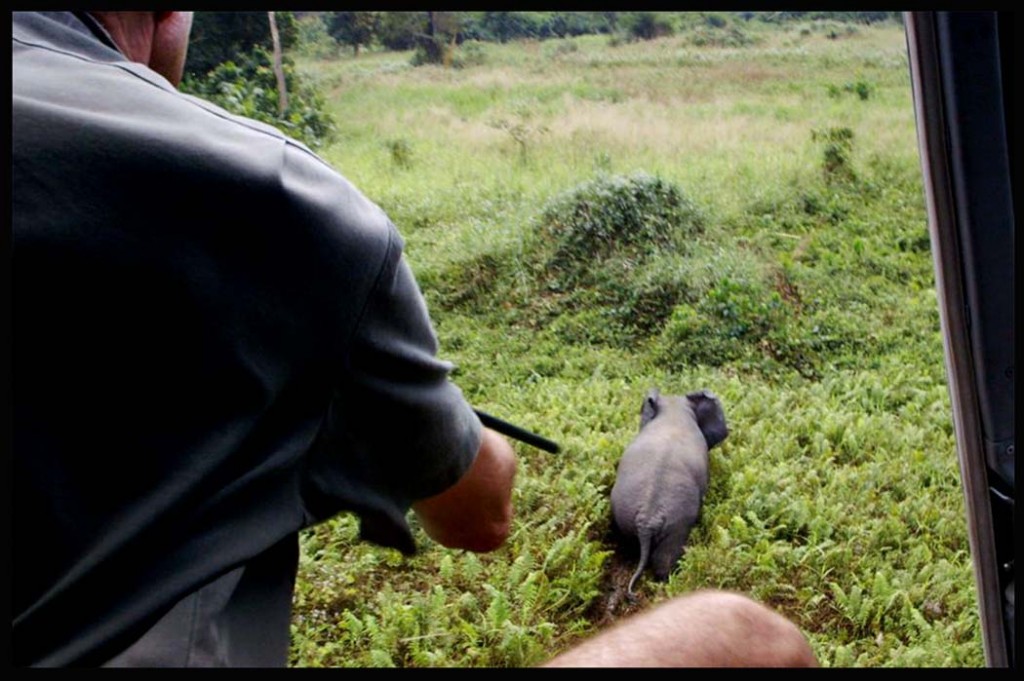 An African forest elephant is shot with a tranquilizer dart from a helicopter.

Deforestation in Marahoue National Park is one reason that conflicts escalated between elephants and humans. According to Sissler-Bienvenu, an estimated 80 percent of the park has been converted to agriculture since the Ivorian Civil War began in 2002.

Without homes or food, the restless and hungry elephants began to roam, becoming dangerous neighbors for the residents of Daloa and other surrounding villages: The animals have stomped three people to death and eaten much of the local crops. (Listen to an interview about living with lions in the Serengeti.)

When villagers threatened to kill the encroaching species, the Ivory Coast government intervened in April 2012, asking the IFAW to help resolve the conflict.

So, to protect the pachyderms, the IFAW translocated four males, tranquilizing them and transporting them in trucks about 310 miles (500 kilometers) from Daloa to Asagny National Park, a federal wildlife reserve that consists of 19,400 hectares (47,938 acres) of forest and wetlands along the Gulf of Guinea.

Please view the following link for more pictures and information: