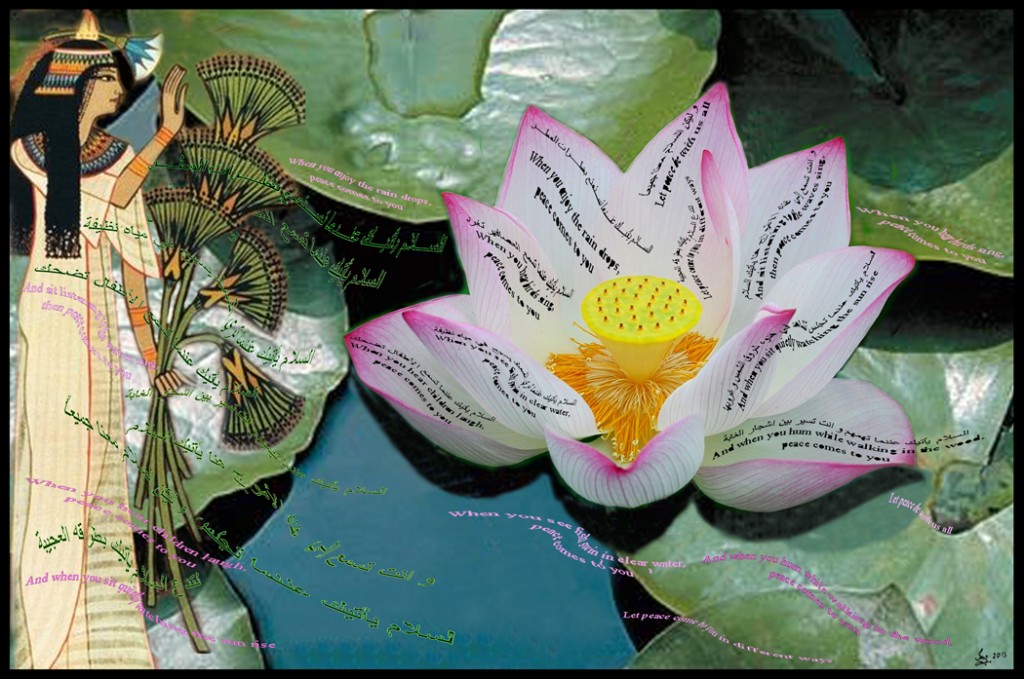 In ancient times the Egyptian lotus was worshipped, especially in Egypt. It was considered a symbol of creation there. In Ancient Greece, it was a symbol of innocence and modesty.

The Egyptian lotus is the national flower of Egypt. It is depicted on many of the seals of the different Provinces in Thailand. It is also an element of the Coptic flag.

Translated into Arabic by Nancy Emad on October 14, 2015 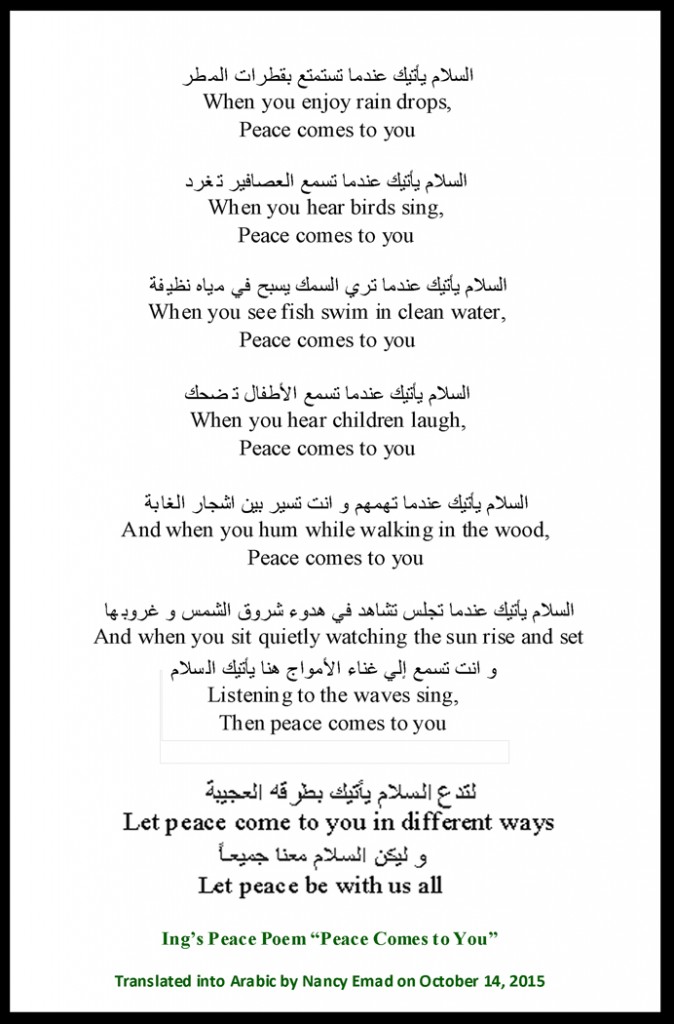 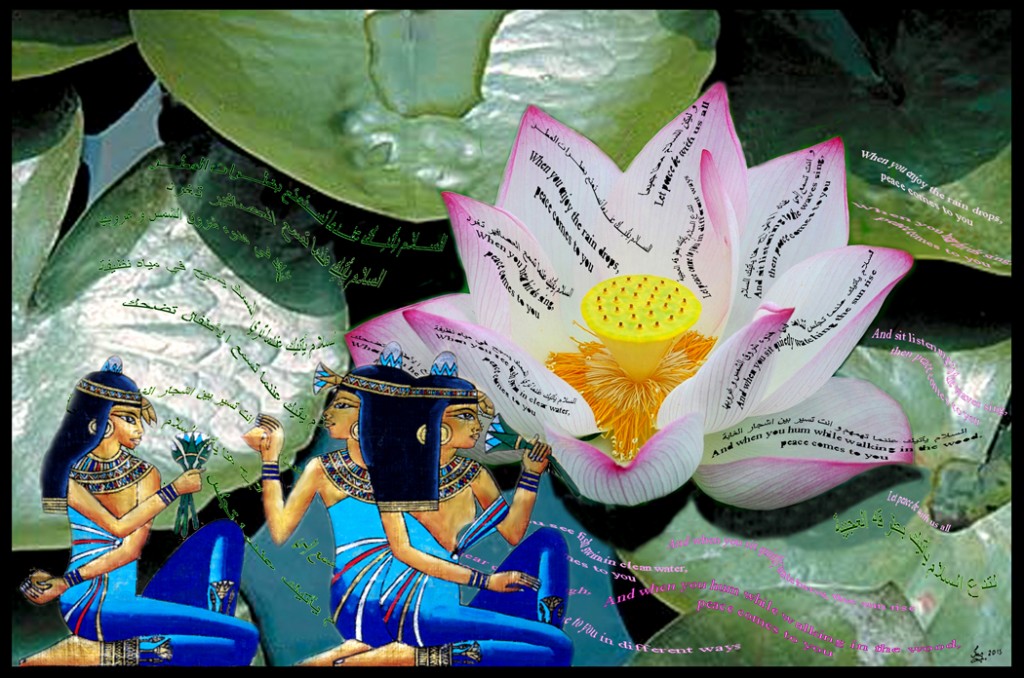 Hatshepsut and Mortuary Temple of Hatshepsut c.1473–1458 BC 18th Dynasty 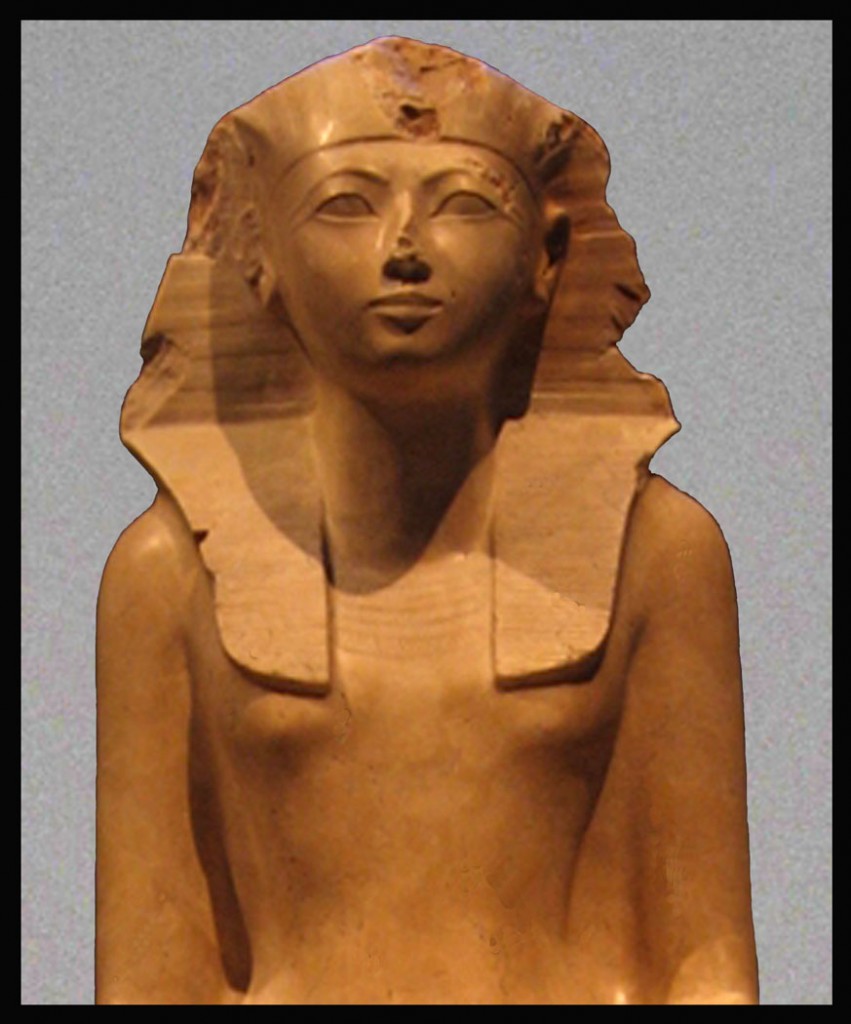 Statue of Hatshepsut on display at the Metropolitan Museum of Art

Detail of Hatshepsut, Eighteenth dynasty of Egypt, c. 1473-1458 B.C. Indurated limestone sculpture at the Metropolitan Museum of Art, New York City. Hatshepsut is depicted in the clothing of a male king though with a feminine form. Inscriptions on the statue call her “Daughter of en:Re” and “Lady of the Two Lands.” Most of the statue’s fragments were excavated in 1929, by the Museum’s Egyptian Expedition, near Hatshepsut’s funerary temple at Deir el-Bahri in Thebes. The lower part of the statue was acquired by Karl Richard Lepsius and taken to Berlin in 1845. The head, left forearm, and parts of the throne were excavated by the Museum, 1926-27 season and acquired in the division of finds. The Berlin fragment was acquired by the Museum in an exchange in 1929.

Hatshepsut (/hæt???ps?t/;[4] also Hatchepsut; meaning Foremost of Noble Ladies;[5] 1508–1458 BC) was the fifth pharaoh of the eighteenth dynasty of Egypt. Hatshepsut came to the throne of Egypt in 1478 BC. Officially, she ruled jointly with Thutmose III who had ascended to the throne as a child one year earlier. Hatshepsut was the chief wife of Thutmose II, Thutmose III’s father. She is generally regarded by Egyptologists as one of the most successful pharaohs, reigning longer than any other woman of an indigenous Egyptian dynasty. According to Egyptologist James Henry Breasted she is also known as “the first great woman in history of whom we are informed.”[6] 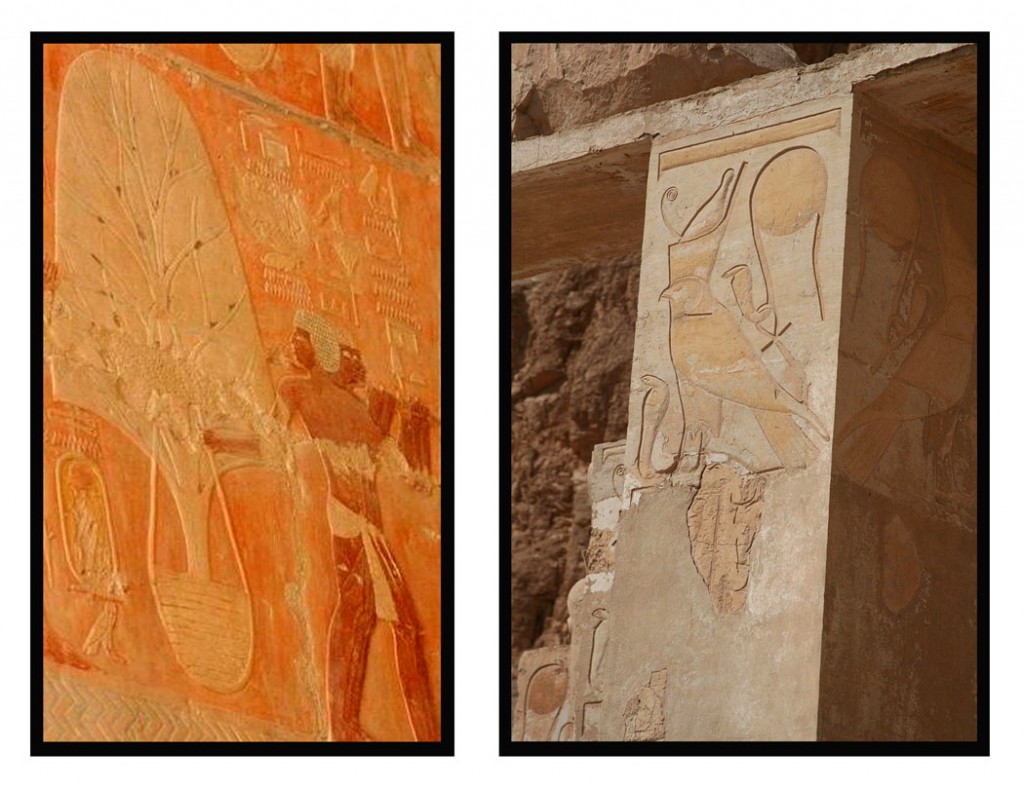 Left:  Trade with other countries was re-established; here trees transported by ship from Punt are shown being moved ashore for planting in Egypt—relief from Hatshepsut mortuary temple

Photograph of a portion of a painted relief showing trees being transported from Punt to Egypt for transplantation; from Deir el Bahari in the Mortuary Temple of Hatshepsut, a pharaoh of the eighteenth dynasty of Ancient Egypt reigning from c. 1479 to 1458 BC

Right:  The Hawk of the Pharaoh, Hatshepsut—Temple at Luxor 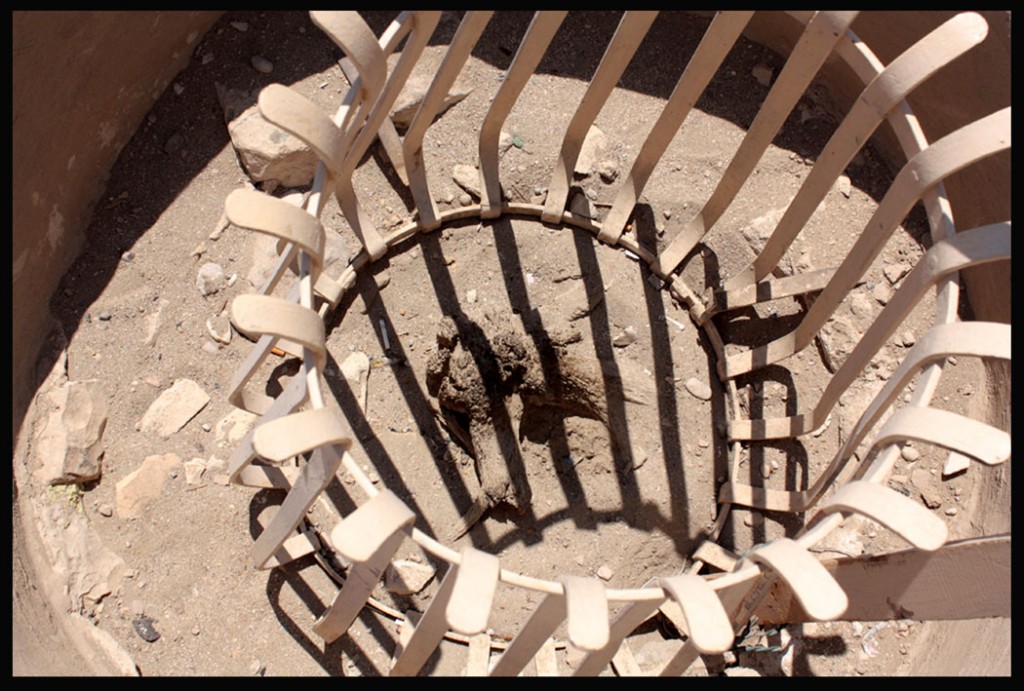 A tree in front of Hatshepsut’s temple, claimed to have been brought from Punt by Hatshepsut’s Expedition which is depicted on the Temple walls, Edal Anton Lefterov – Own work 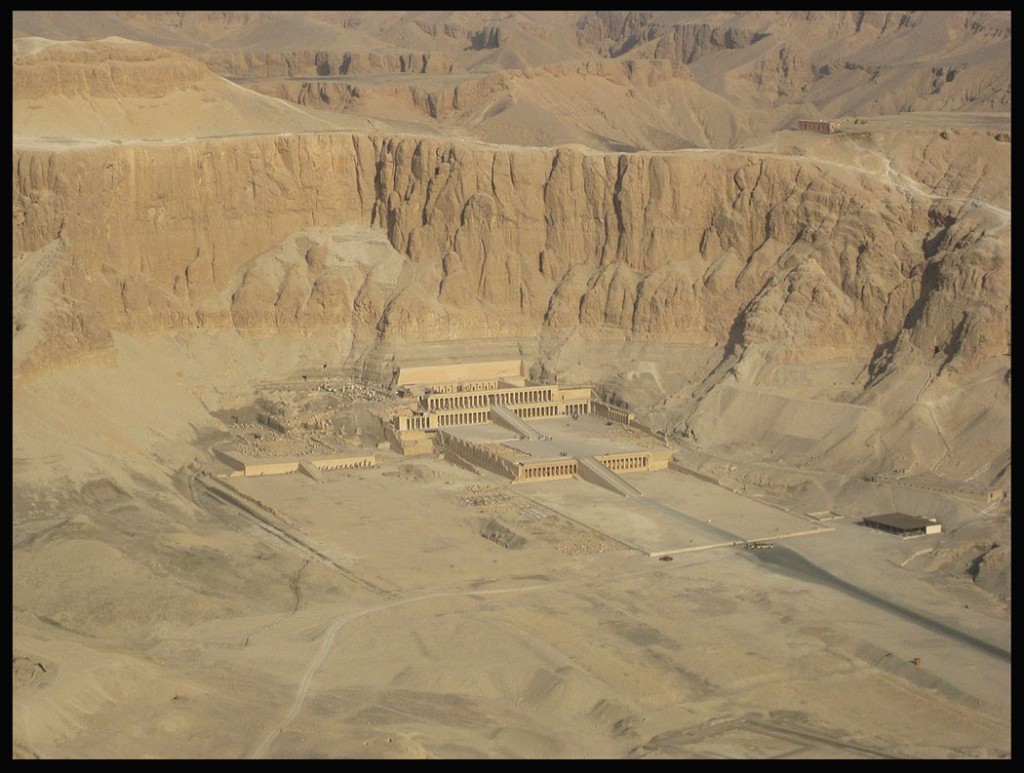 Djeser-Djeseru is the main building of Hatshepsut’s mortuary temple complex at Deir el-Bahri. Designed by Senemut, her vizier, the building is an example of perfect symmetry that predates the Parthenon, and it was the first complex built on the site she chose, which would become the Valley of the Kings 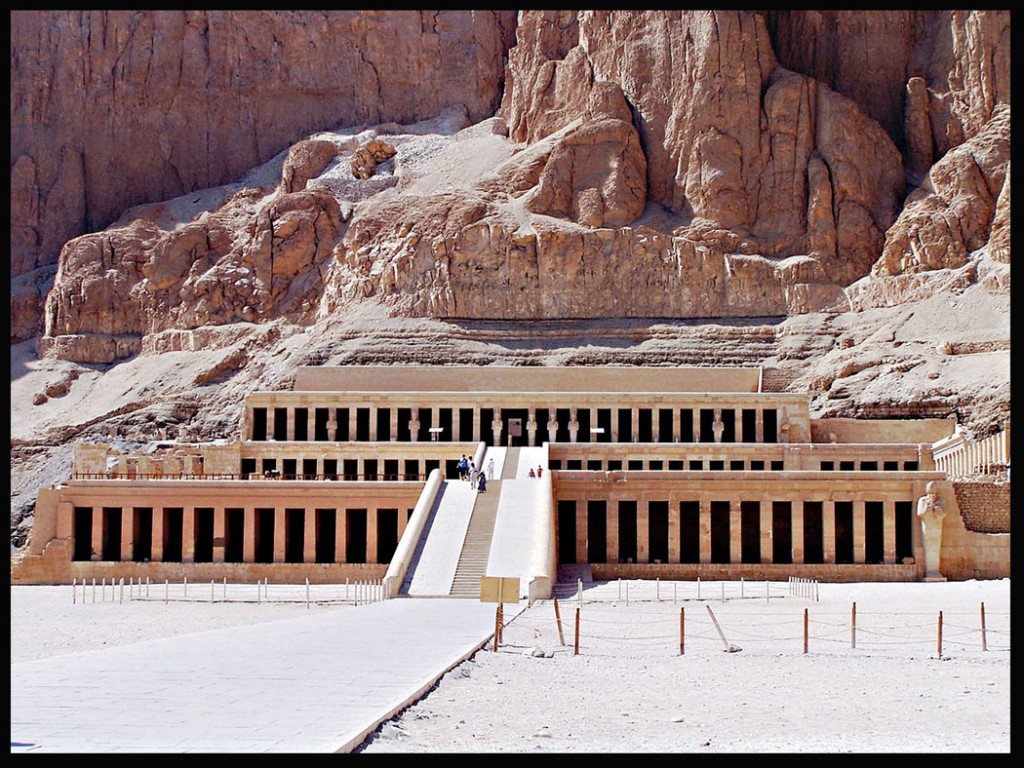 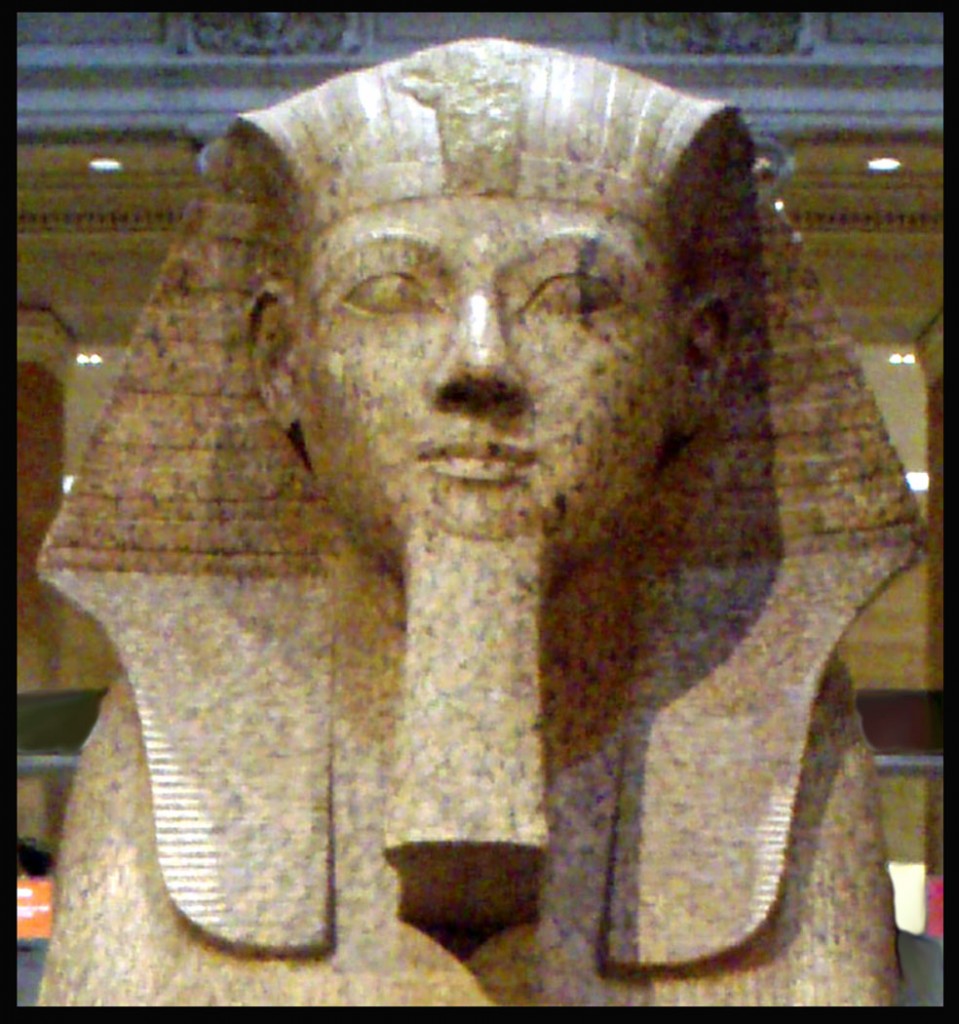 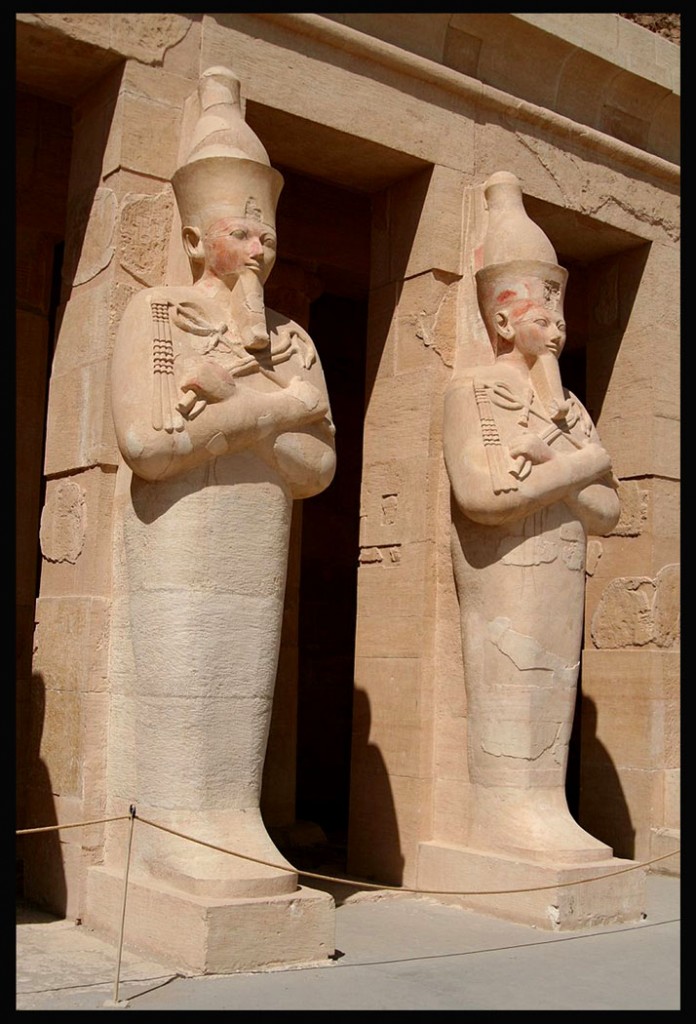 Osirian statues of Hatshepsut at her tomb, one stood at each pillar of the extensive structure, note the mummification shroud enclosing the lower body and legs as well as the crook and flail associated with Osiris—Deir el-Bahri, Steve F-E-Cameron (Merlin-UK) – My photograph 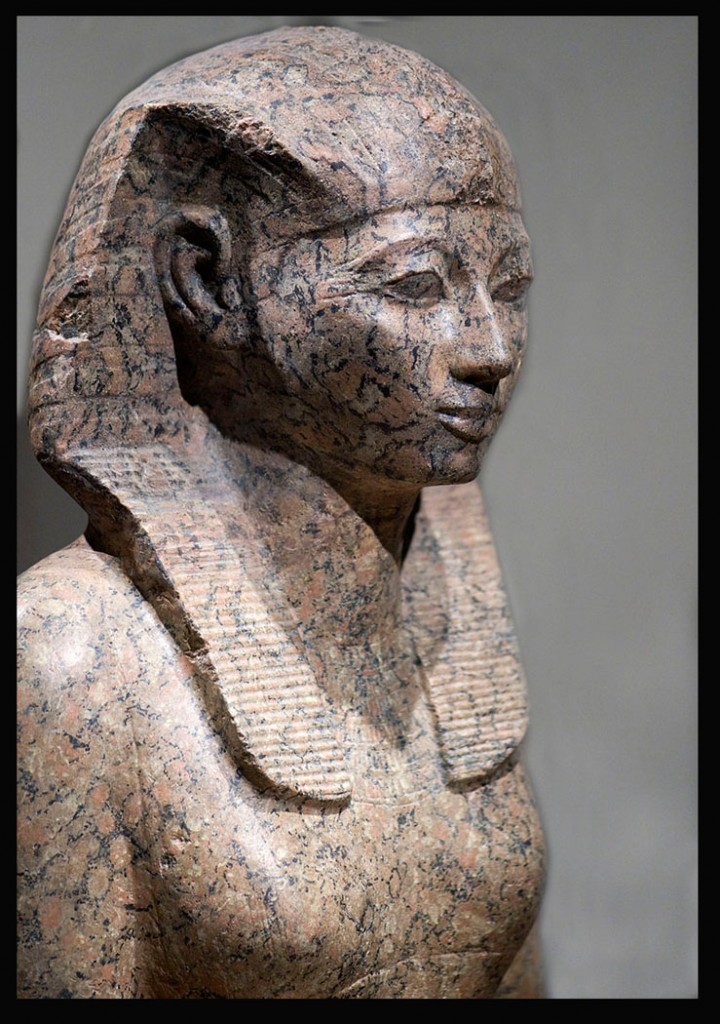 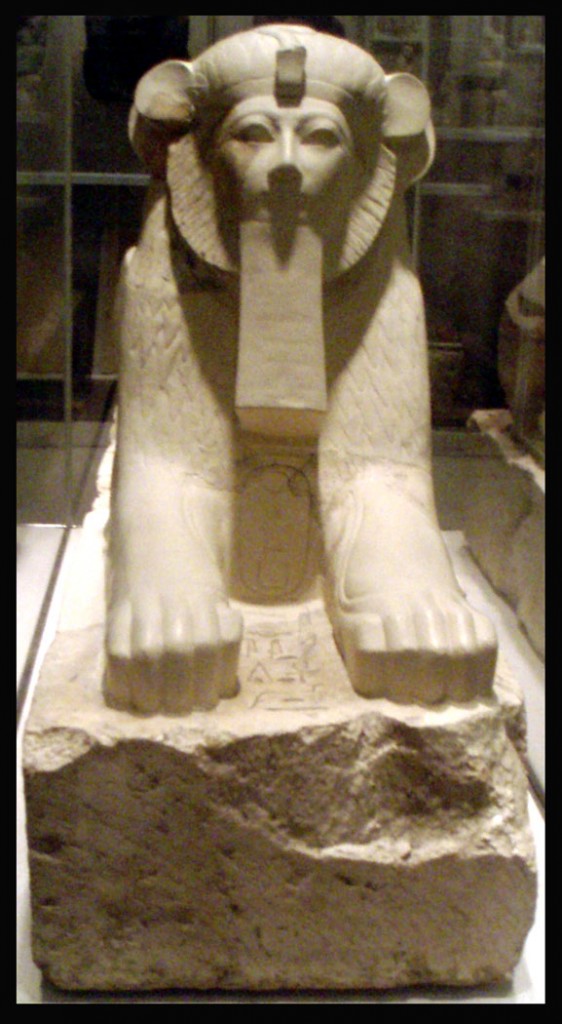 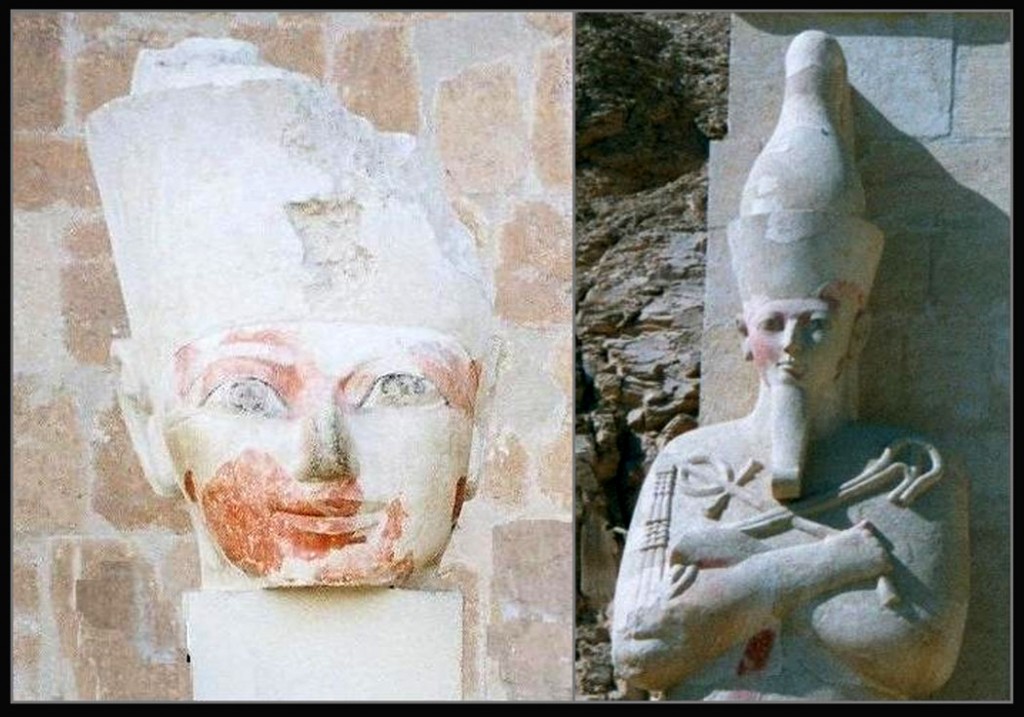 These two statues once resembled each other, however, the symbols of her pharaonic power: the Uraeus, Double Crown, and traditional false beard have been stripped from the left image; many images portraying Hatshepsut were destroyed or vandalized within decades of her death, possibly by Amenhotep II at the end of the reign of Thutmose III, while he was his co-regent, in order to assure his own rise to pharaoh and then, to claim many of her accomplishments as his. 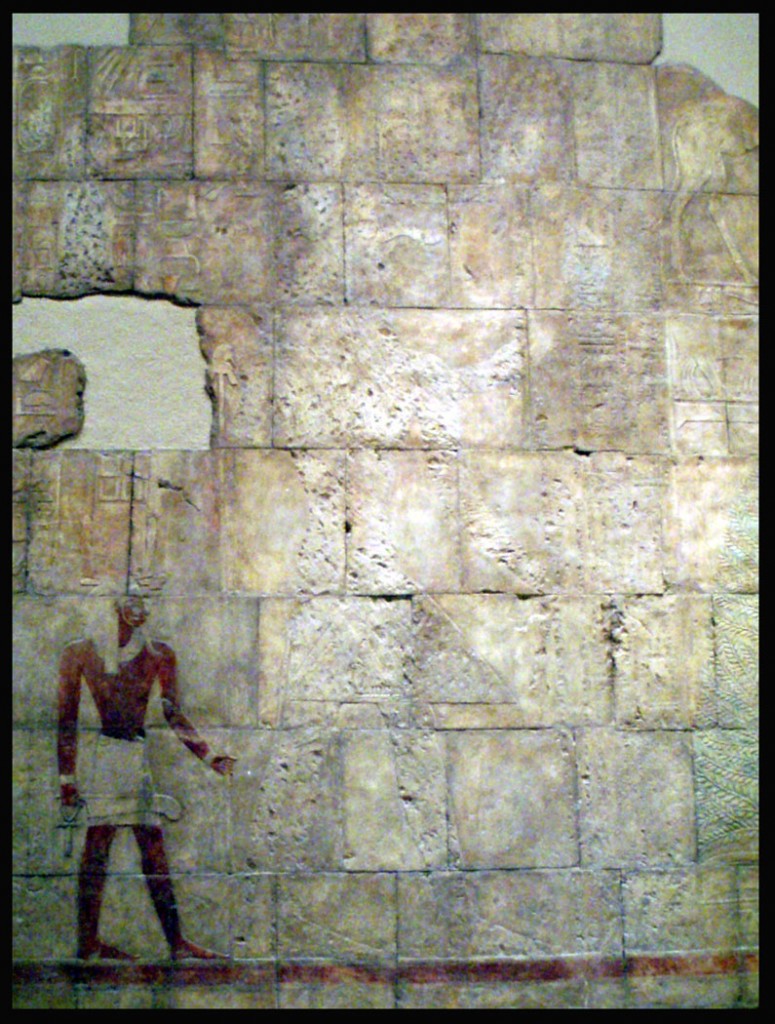 Plaster cast recreation of Queen Hatshepsut’s expedition to punt, the image of the Queen deliberately chipped away and removed. From the Ancient Egyptian wing of the Royal Ontario Museum. 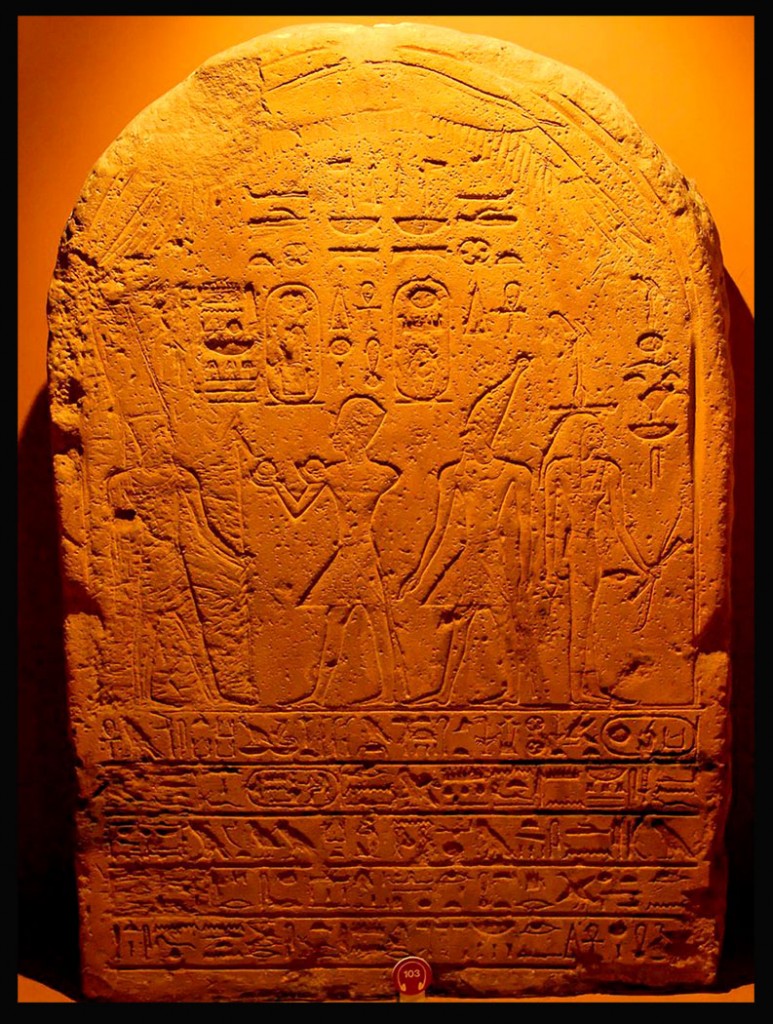 Dual stela of Hatshepsut (centre left) in the blue Khepresh crown offering wine to the deity Amun and Thutmose III behind her in the hedjet white crown, standing near Wosret – Vatican Museum

This is an important stela which dates to the period between the coregency of Hatshepsut and her stepson / possible son-in law (and successor) Thutmose III from the early 18th dynasty of Egypt. It depicts Hatshepsut (the female king on the centre left) and Thutmose III (behind her) who ruled together during the early New Kingdom. 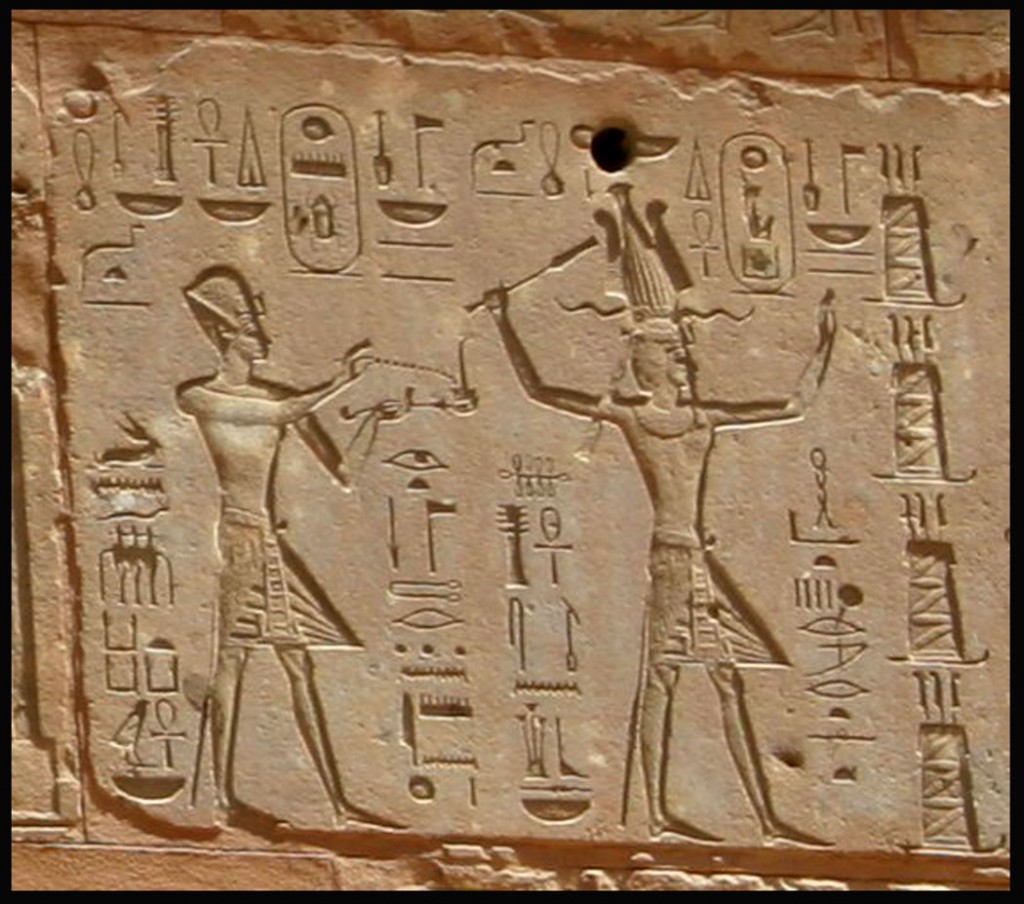 Hieroglyphs showing Thutmose III on the left and Hatshepsut on the right, she having the trappings of the greater role — Red Chapel, Karnak

Thutmose III and Hatshepsut from the Red Chapel at Karnak 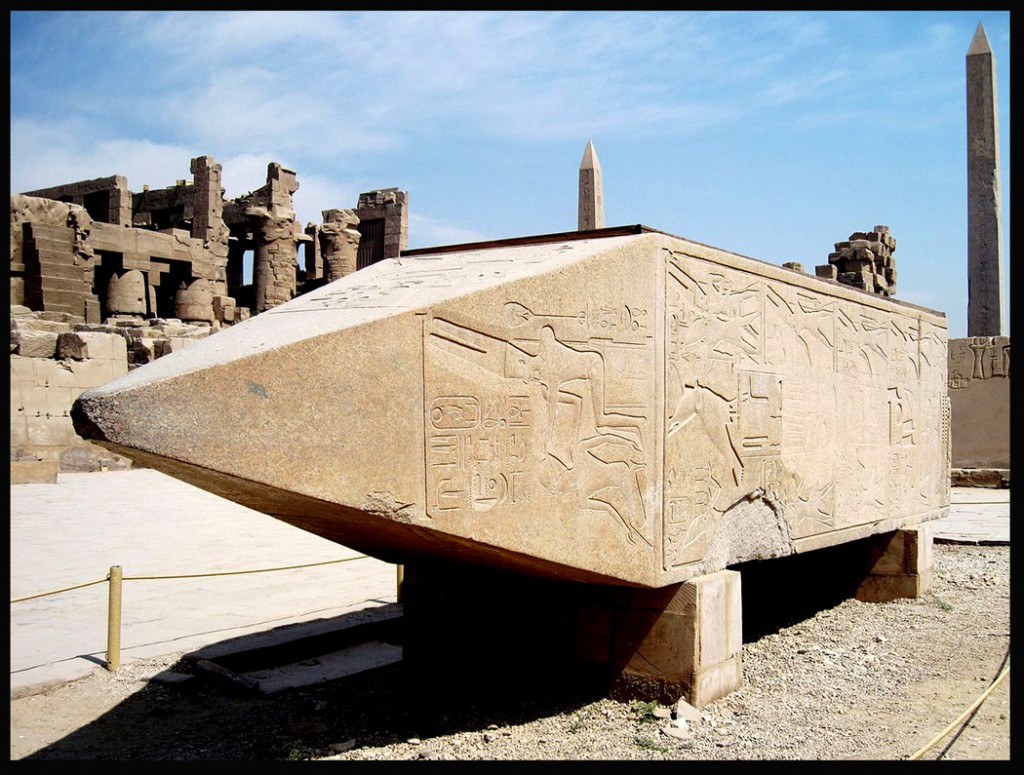 The Mortuary Temple of Queen Hatshepsut, the Djeser-Djeseru (“Holy of Holies”), is located beneath the cliffs at Deir el Bahari on the west bank of the Nile near the Valley of the Kings in Egypt. The mortuary temple is dedicated to the sun god Amon-Ra and is located next to the mortuary temple of Mentuhotep II, which served both as an inspiration, and later, a quarry. It is considered one of the “incomparable monuments of ancient Egypt.” [1] The temple was the site of the massacre of 62 people, mostly tourists, by Islamist extremists that took place on 17 November 1997.

The Polish Academy of Sciences in Warsaw is responsible for the study and restoration of the three levels of the temple. As of spring 1995, the first two levels were almost complete, and the top level was still under reconstruction.[2] 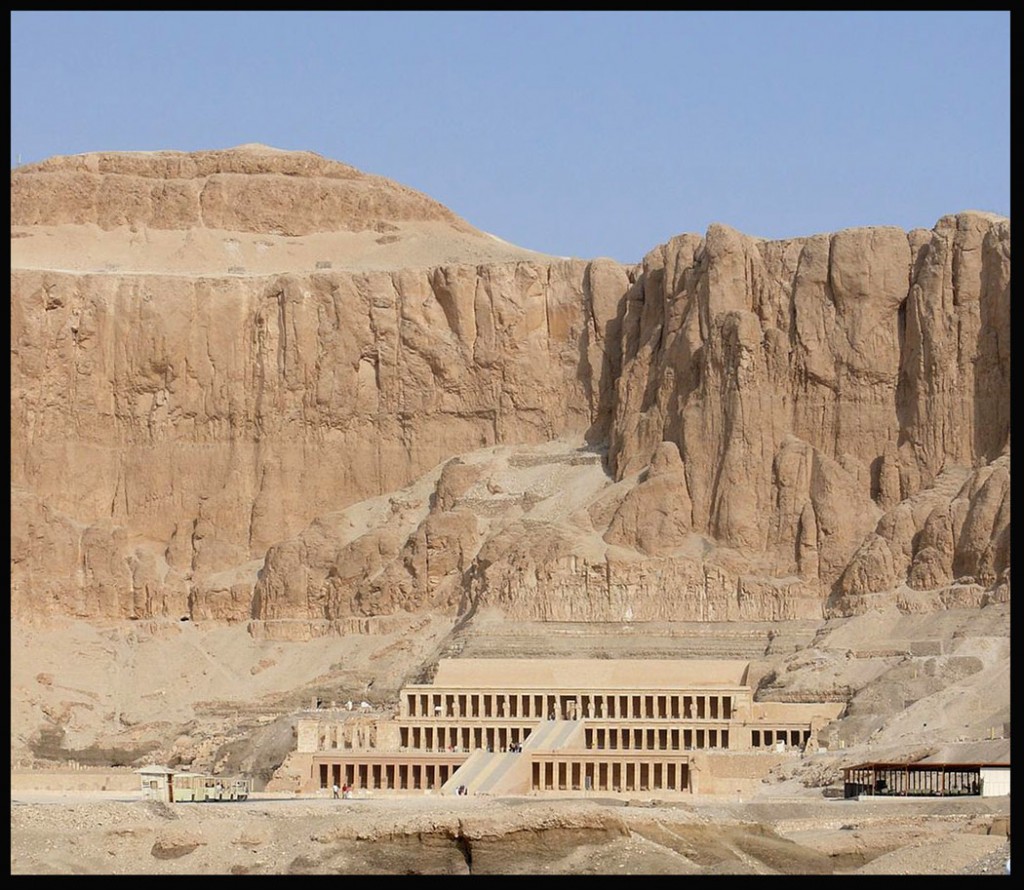 HatshepsutsTempleHeight of the cliffs beyond 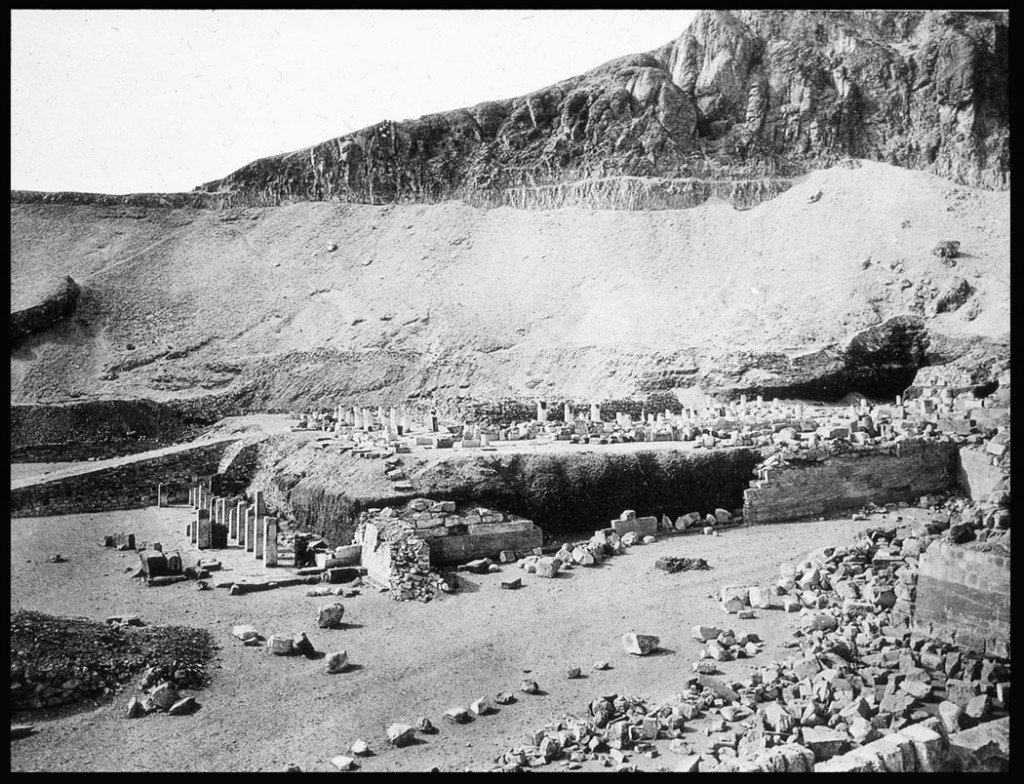 Deir-El-Bahari prior to reconstruction efforts in early 20th century

Hatshepsut’s chancellor, royal architect Senenmut oversaw construction.[3] Although the adjacent, earlier mortuary temple of Mentuhotep was used as a model, the two structures are nevertheless significantly different in many ways. Hatshepsut’s temple employs a lengthy, colonnaded terrace that deviates from the centralised structure of Mentuhotep’s model – an anomaly that may be caused by the decentralized location of her burial chamber.[1] There are three layered terraces reaching 97 feet tall. Each story is articulated by a double colonnade of square piers, with the exception of the northwest corner of the central terrace, which employs Proto Doric columns to house the chapel. These terraces are connected by long ramps which were once surrounded by gardens with foreign plants including frankincense and myrrh trees.[3] The layering of Hatshepsut’s temple corresponds with the classical Theban form, employing pylons, courts, hypostyle hall, sun court, chapel and sanctuary. 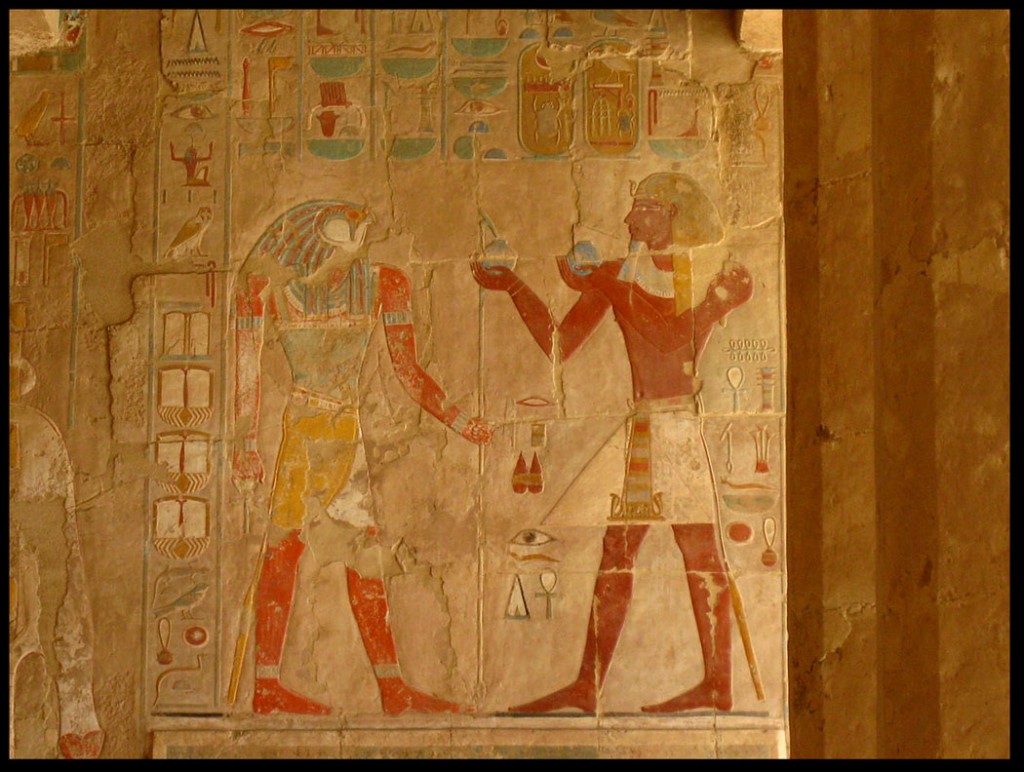 A partially surviving relief in the temple

The relief sculpture within Hatshepsut’s temple recites the tale of the divine birth of a female pharaoh – the first of its kind. The text and pictorial cycle also tell of an expedition to the Land of Punt, an exotic country on the Red Sea coast. While the statues and ornamentation have since been stolen or destroyed, the temple once was home to two statues of Osiris, a sphinx avenue as well as many sculptures of the Queen in different attitudes – standing, sitting, or kneeling. Many of these portraits were destroyed at the order of her stepson Thutmose III after her death.

Panoramic view of the mortuary temple

The main and axis of the temple is set to an azimuth of about 116½° and is aligned to the winter solstice sunrise,[4] which in our modern era occurs around the 21st or 22 December each year. The sunlight penetrates through to the rear wall of the chapel, before moving to the right to highlight one of the Osiris statutes that stand on either side of the doorway to the 2nd chamber.[4] A further subtlety to this main alignment is created by a light-box, which shows a block of sunlight that slowly moves from the central axis of the temple to first illuminate the god Amen-Ra to then shining on the kneeling figure of Thutmose III before finally illuminating the Nile god Hapi.[4] Additionally, because of the heightened angle of the sun, around 41 days on either side of the solstice, sunlight is able to penetrate via a secondary light-box through to the innermost chamber.[4] This inner-most chapel was renewed and expanded in the Ptolemaic era and has cult references to Imhotep the builder of Djoser‘s Step Pyramid and Amenhotep son of Hapu – the overseer of the works of Amenhotep III.[5]

Hatshepsut’s temple is considered the closest Egypt came to Classical architecture.[1] Representative of New Kingdom funerary architecture, it both aggrandizes the pharaoh and includes sanctuaries to honor the gods relevant to her afterlife.[6] This marks a turning point in the architecture of Ancient Egypt, which forsook the megalithic geometry of the Old Kingdom for a temple which allowed for active worship, requiring the presence of participants to create the majesty. The linear axiality of Hatshepsut’s temple is mirrored in the later New Kingdom temples. The architecture of the original temple has been considerably altered as a result of misguided reconstruction in the early twentieth century AD. 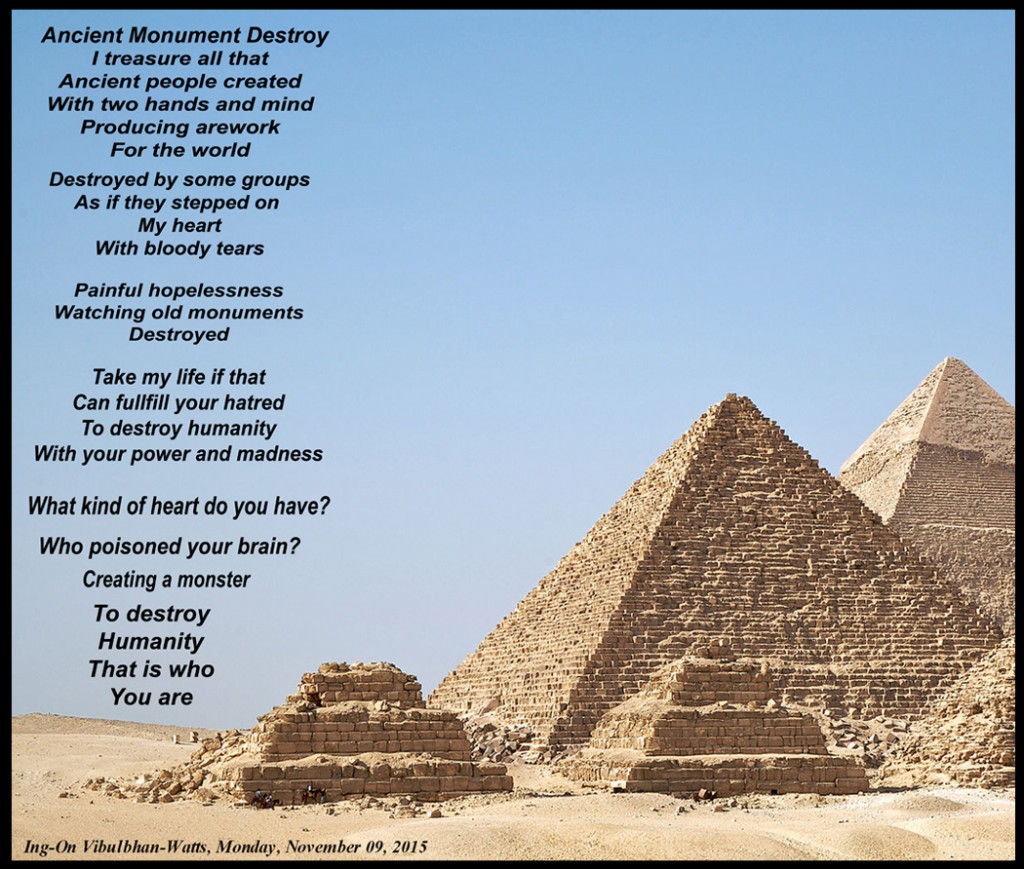 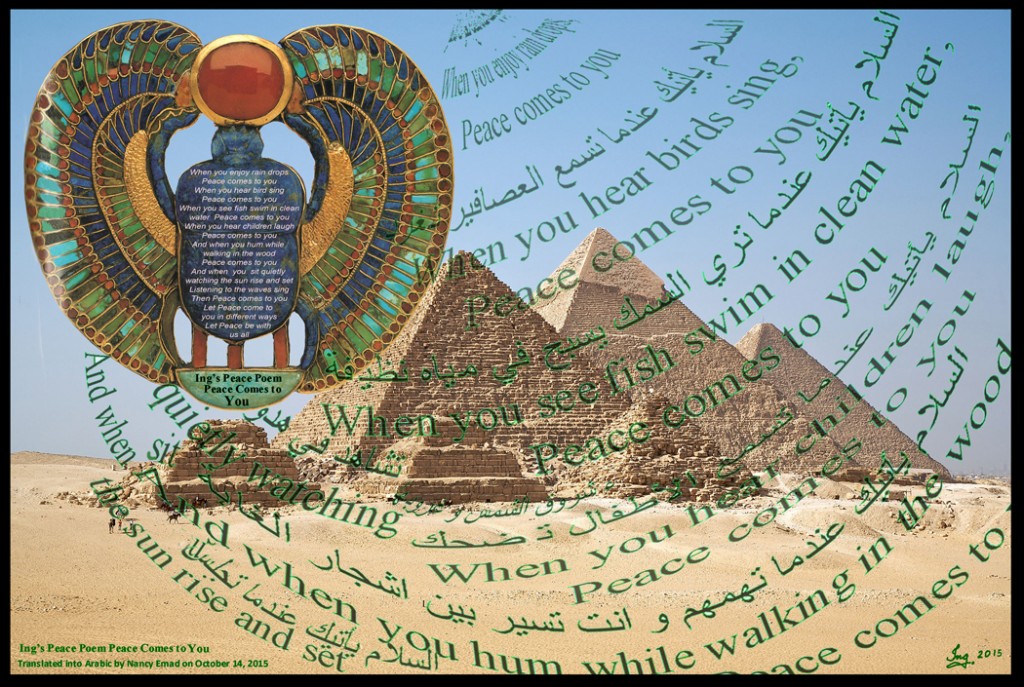 All Gizah Pyramids, Scarab and Ing-On Vibulbhan-Watts’ Poem “Peace Comes to You”, translated into Arabic by Nancy Emad